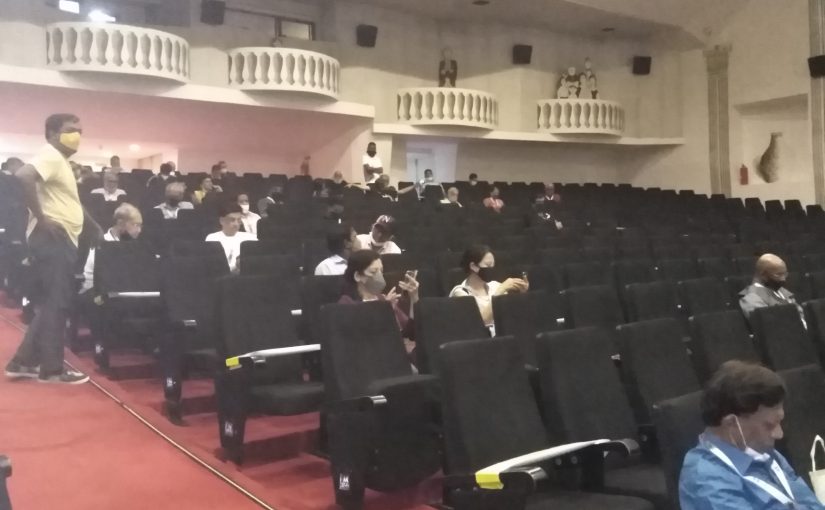 LIMITED: The number of delegates who can physically watch a film is only one-half of the capacity of the auditorium for Covid-19 reasons. The venues are sanitized after each show. Thermal scanners are used to check whether your temperature is gone up or down because of your frustration with this year’s digital IFFI!

Another causality of digitalisation of Goa and India is the 51st International Film Festival. The glossy guides giving a summary of the films shown in various sections are only available online. You can book tickets for physical events including screenings only online on your smart phone. There are no hard copies of show tickets. The film code of the film that you going to see is embedded in your identity card slung round your neck. So at the entrance of the auditorium you sanitize your hand, offer your card for swiping. Naturally, anything digital may be hacked and misused and this is what is happening. For senior delegates this year IFFI is a nightmare. Of course, there are counters for booking but the young people here only help you book the films online on your smart phone! So is there a data privacy issue which is not taken care of either by the ESG or the PIB?

Last year’s 51st International Film Festival of India commenced this year in 2021 on January 16, that is Goa’s Opinion Poll Day. The Shyama Mukherjee Stadium, which has a capacity for 4,000 people, barely witnessed 300 people for the inaugural opening ceremony of this hybrid IFFI. This was because of the Covid-19 restrictions. It would have been impossible to accommodate even 2,000 people if the rule on maintaining physical distance had to be followed. The fact that inter-state travel is difficult during IFFI, gave an opportunity to many Goan artistes to perform at the opening ceremony. Fado singer Sonia Sirsat headed the list with her popular singing popular of Konkani numbers like “He pori konachi” and other Konkani hit songs. There were also traditional Goan dances performed by Goa’s tribal communities.
Despite taking such elaborate precautions to have a Covid-19 free IFFI, neither the Chief Minister nor chief guest from Karnataka, superstar Sudeep Sanjeev, were wearing masks. I notice that the CM never wears his mask on public occasions. Is this not setting a bad example? I don’t know why the police don’t fine him Rs2,000. The majority of the delegates were from the South and understandably there was a huge demand for invites for the very limited seats available for the opening ceremony. Since the opening ceremony is conducted by the ESG officials, they were selling the invitation for as much as Rs 5,000 to film crazy southern fans. As it is always happens very few of the invitees attended the inaugural film.
Whoever chose “Another Round” as the opening film has a black sense of humour. Or knows that the only reason why Goa attracts so many tourists and delegates from the south is because hard drinks are much cheaper in Goa. Indeed they are half the price at which they are available in the neighbouring states of Karnataka and Maharashtra. Which is why apparently, bus loads come to Goa from neighbouring states, on a one day drinking holiday to Goa. The title of the first film “Another Round” made by Danish film maker Thomas Vinterberg starring Mads Mikkelsen means having one more drink. The film was appropriately on alcoholism. Which is extremely common in Goa though Goans won’t admit it.
In the UK, if you drive while you drink, your driving licences will be cancelled even if you belong to the royal family or are the Prime Minister of the UK. In Goa there is strong resistance to implementing the changes in the central traffic rules which have increased the penalties for various offenses. The CM infact has postponed implementation for three months. I understand that the film glorifies alcohol. It refers to famous personalities like Winstol Churchil, the PM of the UK during the second world war as an alcoholic. Implying that you can be successful in life only if you are an bevda. My Goan bhatkar friends keep insisting that they drive better when their personal tanks are full of alcohol. On New Year’s, Eve and even after the New Year, the Goa police did not arrest a single tourist or local for drunken driving. Surely given the fact that alcohol is a serious problem, at least the person who sent the press note from PIB should have been more sensitive in describing the film. The Director of the Film is from Denmark and probably did not know much English. The PIB press note claimed that the Director celebrated alcohol in his speech at the opening ceremony. Surely Daru is not something to celebrate or encourage whether in Denmark or in India leave alone in Goa which has a largest amount of bevdas and bevdis in the country.