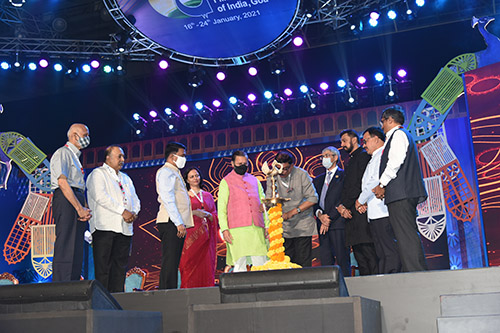 IT was a red carpet day January 16, 2021, when the country’s 51st International Film Festival of India was inaugurated at a lamp lightening ceremony honored by chief guest Kannada actor Kichcha Sudeep at the Dr Shyam Prasad Mukherjee Stadium in Goa. Others in the picture are Union Minister of I & B Prakash Javadekar, High Commissionor Bangaladesh to India Mohammad Imran, Goa Chief Minister Pramod Sawant, ESG Vice-President Shubhash Phal Desai, DFF Director Chaitanya Prasad, other dignatories. After the musical entertainment soiree the opening film `Another Round’ (directed by Thomas Vinterberg and Mads Mikkelsen) was screened at the 1,000-seater Dinanath Mangeshkar Kala Mandir Auditorium at the Kala Academy in Panaji at 7 pm. All Covid-19 protocal was observed during the screening with an audience wearing masks and seated in alternate seat arrangement.

ON January 19, 2021 the Mumbai Police busted a baby selling racket. On Jan 20 the Mumbai Police busted a racket selling fake Johnson & Johnson sutures in medical stores outside the J J Hospital. A year ago they also discovered fake Amul butter in the market. The Indian Journal of Pharmaceutical Sciences has studied and found that spurious drugs in India have a huge market.
With Covid-19 vaccines being rolled out the public is in the grip of unknown fears about side-effects and perhaps there may be laxity about spurious vaccines being introduced in the market for vaccines. The 1.2 billion population in India is a huge number and with what we see prevalent the vaccines are a real threat to life if proper precautions are not put in place.
Vaccine vials must be appropriately coded with QR codes so that anyone may confirm authenticity and validity. Used vials must also be correctly disposed under medical supervision and not left to indifferent housekeeping staff! The people of Goa hope that full proof precautions are in place and being implemented for the delivery of vaccine shots. Goof-ups can result in some terrible tragedies which we can only imagine.
Further, since these vaccines are temperature sensitive, the vials must have temperature stickers that change colour when exposed to higher than required temperature. All vaccines may be free but this may not be the case! We have witnessed the callous way in which critical ballot boxes and EVM’s were handled in the past and hence the concerns in the handling of vaccines during this pandemic times.
—R Fernandes, Margao

MOPA AIRPORT CAVE IN?
IS the deafening clamour of wrong beginnings reverberating and shattering to the clap of thunder and bolts of lightning out at Mopa plateau? The issue of finding underground caves at Mopa plateau which is a wilderness of exotic flora and fauna, besides being a UN protected zone, is not the only matter which the proponents of an illegal airport should take stock of.
Underground caves indicate that the all the initial survey work was only superficial! The whole concept and intentions of promoting this draconian project is fatally flawed. As per the Mopa Vimantal Sangarsh Samiti, only 29,000 square meters of land has been acquired for the project. The rest is all illegal land without taken without paying compensation to farmers – who, in any case, do not want the airport being thrust upon them.
Initially, even the Supreme Court ruled that the trees numbering 54,676 must be transplanted. Is this being done? Or is it only about a wanton felling of trees for future disasters? If the environment rule book is not being followed than it is better to abandon the project for it is bound to be jinxed – after all the Central and State government is usurping a huge amount of land for this ill-conceived airport.
Neither governments nor the GMR have observed the law in letter and spirit even after the 9-month stalling in Supreme Court. The case is being valiantly fought by the Federation of Rainbow Warriors. The falling apart of plastering from roofs and walls of new homes built for the Dhangar tribal also reveals shoddy, sub-standard quality of work.
Mopa Airport will destroy 46 crystal clear fresh water springs and an entire natural eco-system which keeps Goa green and lush. The secrecy with which airport work is being fast-tracked and the banning of opposition to the project, are clear indications that democratic norms are being flouted.
The Mopa villagers should agitate like the courageous villagers of Shel-Melauli and recover their land! There is so much behind the Mopa airport project which is kept hidden. Activists should garner support from villagers being cheated of their land and abort this ill-conceived project — for which the foundation stone was laid 40 km away for fear of black flag protest demonstrations against the Prime Minister of India Narendra Modi.
—Elvidio Miranda, Panaji

AMUSING FISHY STORY!
SOME days back Sidharth Kuncalienker and myself went on an errand, nearing lunch time. He suggested that we lunch out as a long delayed anniversary lunch. We usually have anniversary lunch together. Hadn’t this time, so his suggestion was well placed.
Except: He suggested a great fish place AND
I don’t like fish. It was a great fish place with everyone slurping it, burping it, smacking-lips it, licking-fingers it. (and you can see the basin where contents, fish eating customers gargling so loud, that it feels the fishes have come alive in their stomachs)
“This can’t be anniversary lunch.” I retorted, looking around, taking in the sounds, smells and stuff. “Why?” he wants to know, as he slurps it, burps it, smacks-lips it, licks-fingers it. “Anniversary lunch should be, you know, nice.” “Ah. Like in a fancy-schmancy place?” “I will not mind.” “Of course.” Said in between the slurping, burping, smacking-lips, licking-fingers. “We agree, see. Fine Dine, serviettes, a horde of cutlery, loaded menu, a separate dessert buffet…” “And bad food.” He completes the sentence. Sometimes we both agree. Now, that is quite fishy story even to me!
—Sonia Kuncalienker, Panaji (Courtesy Facebook)

BIDEN SHOWS THE WAY
WITHIN hours of American President Biden assuming office a series of executive orders were issued. What was intended and what were priority issues were addressed at break neck speed. No energies were dissipated in blame games; in fact there was no reference to Donald Trump and his failed regime.
This new much wiser President Biden has not shown any vengeance or hurled critical blame on past governance. He acted swiftly to set right abberations reflecting the role of America on world stage. The only issue actively debated by law makers is the insurrection, impeachment, seizure of Capitol Hill, civil war and desecration of American pride in democratic norms. This is understandable.
In India voters changed the government so that it may set right what is bothering the nation and deliver on promises made by the winning party. Instead of all that happening controversial issues like demonetisation, GST issues, citizenship laws, Kashmir…have engulfed the Indian nation and these issues consume, dissipate energies needed to focus on real issues! Self-glorification of self and party is a priority and of course winning elections the top most priority!
This current government wastes its time raking up issues of past governance, throwing cold water on past achievements, all to portray the old government in a bad light. On the other hand it is busy building fancy monuments, celebrating all kinds of national days to honour leaders of yesteryear. Is this progressive change or what? One term is not enough, we give them another chance to continue in power…despite poor performance!
I think development has really taken a back seat in this country and all systems are out of gear, tarnished, dysfunctional, revealing the country in poor light. The Opposition too is down in morale for it is constantly being criticised by the ruling party which has nothing more constructive to do!
—Nelson Lopes, Chinchinim (courtesy Facebook)