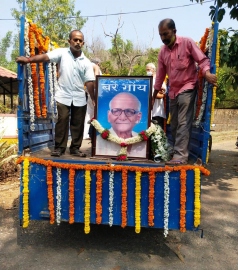 TRIBUTE: Goans from all walks of life paid tribute to Gandhian freedom fighter Gurunath Kelekar, 91, who passed away in the early hours of on Tuesday, January 19, 2021. The van in which his body was being taken for cremation was drapped in a banner spelling out Borem Goem, his favorite greeting for everyone!

Unlike other Konkani leaders who have been insisting that Konkani in the Devnagiri script alone should be the official language, Gurunath bab believed that Konkani in any script should be accepted as the language was more important than the script. A Gandhian till the end, he started Movement for Amity towards Roads in Goa (MARG) to educate children in road safety, saving thousands of lives in the process. He participated actively in the Opinion Poll and the Konkani movement. He brought out Novem Goem, Maruthi children’s magazine in Devenagiri script. Goenche mog was in Romi. Novem Goem [daily} was in devengiri in the (morning edition) and was in romi script in the (evening edition.}

MY earliest memory of my father’s mission for Goa and Konkani is when I must have been 2 years old. I remember one evening we three kids were huddled around my mother when news came that my father had been arrested and taken to the police station. This was in 1964. In 1964 there was a Marathi Sahitya Sammelan in Margao. Those were times when those who were fighting for Konkani – very few then – were being ridiculed. At the Marathi Sahitya Sammelan, an eminent Marathi author in his speech called Konkani a dialect of Marathi. The Marathi proponents were not even willing to call Konkani an independent language in those days.
The moment this Marathi author called Konkani a dialect, 11 Konkani lovers – my father included — who were strategically seated in different parts of the auditorium, stood up and protested. They were pounced upon by the police and whisked away under arrest. My mother Kumudini Kelekar complemented my father’s political concerns by taking care of us children, so that we didn’t feel any lack of parenting!
The other early memories I have are of the campaigning which went on during the Opinion Poll. My parents put all their might for keeping Goa as a separate state and two leaves was the symbol we were all rooting for. We used to post big banners of the two leaves picture in front of our house. Those supporting merger would remove the banners at night and post a banner of some flowers which was their symbol! Also, I remember attending meetings with my parents where songs were sung by Ulhas Buyao.
My father walked the talk always. He was the first to start a primary school that was in the Konkani medium just to educate us children in their mother tongue. Many other parents joined up and a school with 15 children was started. The rewards were huge. Almost everyone from that school achieved great heights in their career. This is indeed a slap in the face for those who believe children should be educated in English, irrespective of their mother tongue.
Many other childhood memories abound mostly about fighting the Marathi lobby. Success did come. Konkani was recognized by the Sahitya Academy of India as an independent language, and later after Statehood, it was introduced in the 8th schedule of the Indian Constitution. It is indeed interesting to note that Konkani’s biggest enemy then were the Marathi protagonists who were unwilling to recognize Konkani as a language, they wanted Goa to merge with Maharashtra. And they did had great allies in Dayanand Bandodkar, who became the first Chief Minister of Goa with his political party which is still – almost 60 years later – the Maharashtrawadi Gomantak Party.
Compare it to today’s times of globalization where all Indian languages (including Marathi) are being threatened by English. My father was at all points of his life working hard for the causes he loved – right from the freedom movement. He brought out Novem Goem, Maruthi children’s magazine in Devenagiri script. Goenche mog was in Romi. Novem Goem [daily} was in devengiri in the (morning edition) and was in romi script in the (evening edition.}
He had great social instincts. He led a highly disciplined life. He did not drink. He used to smoke when young but gave it up soon after marriage. My mother joined him as a true soul mate. It was a love marriage, both of them having met while doing a play of Ravindranath Tagore titled “Chitrangada.” My elder sister, not surprisingly, is named Chitrangada.
He believed in Indian culture in a true sense and opposed the morphed and perverted version based on Hindutva.

Why did he do all this? What was the source of his inspiration? It started with Ravindrabab Kelekar, my father’s third cousin. He was four years elder to my father and they were living in the same ancestral house in Priol. Ravindrabab got influenced by Gandhi, and Kakasaheb Kalekar, and passed that bug to other cousins including my father. What helped was the liberal atmosphere in the Kelekar family. The Kelekar family prized and still prizes intellect and working for social justice over business or money matters. That has given the Kelekar family a lot of freedom fighters. And the elders in the family have been very supportive.
Though my father never said it himself, he suffered a lot of hardships during his childhood. His father (my grandfather), who was manager of Majestic Cinema theatre in Mumbai, had a paralytic stroke when my father was just six years old and had to be moved to Goa as he became handicapped for life and could not work anymore. He had to forego all his ambitions for himself and his children due to the stroke, and had to move to the ancestral house in Priol. To help support the family, my father dropped out of school after the 8th standard and took up a job. Also, my father had a twin sister, who was suffering from epilepsy. Those were the days when epilepsy did not have a cure. She died soon after.
Interestingly, my father still plunged into the freedom movement. One night the notorious Monteiro, Salazar’s police officer, came to the house with other cops at midnight to arrest him. He was beaten badly and asked to reveal the whereabouts of his fellow freedom fighter colleague Anthony Dsouza. But my father was not one to squeal on another fellow freedom fighter’s whereabouts.
My father was restless about Goa and its future even till his last moments. He always believed in the potential of Goans to change the future to what they wanted. I have never seen him as a cynic.
As part of Marg movement, he was relentless about making people – especially school children – aware of road safety. And later he found that the root cause for the chaos in today’s society is the lack of civic sense. So, he went on a mission to start civic clubs and teach people how to become good citizens. He used to lament that all we have become is voters and not citizens.
He was tireless when it came to his work and honestly I have never seen my father ever disappointed or depressed. He was great and meticulous at organizing events and a stickler for time management; all his events would keep exact timings. He never lobbied for recognition and was happy doing his work without bothering about rewards. In this aspect, he was observing at heart the advice given in the Gita.
There are many other things which he did including coming out with the first English-Konkani dictionary. He was awarded the Sahitya Academy award for his translation of Gandhi’s autobiography into Konkani. But the most poignant thing I found in during his cremation was when the Margao traffic police cell staff came and placed a wreath on his body. He was no government officer, nor did not hold any post. And we know how the police work! What could have made the police fellows come on their own to place a wreath on my father’s body? It is because he was a true Goenkar who considered the police as his own people. The police truly identified with him. Similarly, he once felicitated the bhadel of Margao ( the tribal Gowdi women who work as laborers in the Margao market ) for their honesty.
Of course, as son and father, we had our differences too. I did not agree with him on a lot of things. I especially found some of his views too conservative for my liking! But in the end, I knew he would be the one I could count on. In some of the things in which I took on the government – in 2009, Rane the speaker slapped a notice of breach of privilege on me on the floor of the house, when I wrote a column in the OHerald calling the assembly a comedy show — not in one word my father said anything to me. To the contrary, he was very proud of me.
I could go on and on about my father but I don’t want the article to be too long! I will end with one of his favorite poems here, a poem by Bertolt Brecht titled: Why Should My Name Be Mentioned?