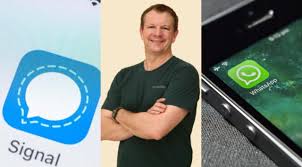 GREED: With Whatsapp being bought over by Facebook, which has decided to share the user data of 40 crore subscribers, with commercial and political interest, you can switch to Signal app started by the co-founder Brian Acton, who has pledged to maintain atmost secrecy of Signal app users!

AND a few stray thoughts on the swearing in of Joe Biden and Kamala Harris as the president and vice-president of the United States. The city of Washington was turned into in armed camp to ensure that supporters of Trump did not disrupt the swearing in ceremony. Ironically, in everyone’s mind, was the tragic assassination of the late Indira Gandhi by her own bodyguards at her official residence in New Delhi.
When the Federal Bureau of Investigation (FBI), which is like the Intelligence Bureau (IB) of India, checked the video of the assault on the American Capitol building, they were alarmed to find members of the elite National Guard among those who attacked the Capitol. Much like India’s Special Protection Group which guards the prime minister and the president. Over 20,000 National Guards and the army were guarding the venue of the swearing in ceremony. All were screened by the FBI to ensure that they were not Trump supporters. Even on the eve of the swearing in Trump tried to sabotage government policy by lifting the travel ban imposed to prevent the spread of the new strain of the coronavirus.
Bidden made it clear in a tweet that not only would the ban continue but would be reinforced. Trump’s biggest crime was that he refused to take any steps to prevent the spread of Covid-19. Which is why the US heads the list of countries with the largest number of Covid-19 cases. There have been deaths every single minute somewhere or other in the United States. Former President Trump himself seldom wore a mask and is reported to have had parties in the White House where Covid-19 precautionary protocol was not followed. Trump dismissed Covid-19 as just a form of cold and did nothing to halt the spread of the infection.
The US has the dubious distinction of not only having the largest number of cases but also the largest number of fatalities. At last count it was 30 lakh cases and over five lakh deaths. Among the areas the worst affected is the Silicon Valley, which houses all the largest IT companies from IBM to Google to Facebook. President Trump also endangered the security of the US by going back on the nuclear agreement with Iran. The understanding was that Iran would stop nuclear tests and in return the sanctions imposed would be lifted. Following Trump’s announcement of the withdrawal of the pact, Iran resumed enrichment of uranium to over 20% necessary to make nuclear bombs. Trump also reversed the policy of the United States towards North Korea, which is considered a rogue state.
AMONGST the worst affected countries of Trump’s foreign policy was India. Against the wishes of the major IT companies, Trump modified the H1B1 Visas restricting recruitment of Indian software engineers. The spouses of Indian migrants were not permitted to work even if they were qualified. Trump was also very friendly with Vladimir Putin, the President of the Soviet Union, who is alleged to have helped him to get elected. Trump has polarised the US just as Narendra Modi has divided India. In his inaugural speech after he was sworn in four years ago, Trump made it clear not just America but Americans would be his priority. By American, Trump limited the definition only to white Americans. Which meant that Trump was hostile to migrants from around the world who have become citizens of the United States.
Trump has perhaps forgotten that whites in the US are themselves migrants from the UK and its colonies. The US was to the UK what the Andaman Islands were to the British in India. All the criminals in the UK were taken to what is now known as the US and abandoned there. Though Joe R Biden has been sworn in, there are still fears that there may be another civil war in the US. The first civil war in the US was between the states which wanted to abolish slavery and those who wanted to maintain it. Abraham Lincoln, who headed the liberation of the blacks, is one of the four American presidents to be assassinated.

AND a few stray thoughts on Whatsapp threatening to share the data of users with Facebook. The popularity of Whatsapp, which reportedly has 40 crore subscribers in India, has been bought over by Facebook owner Mark Zuckerberg. The unique selling proposition of Whatsapp is the end-to-end encryption. Which means that every letter and word is confidential and even the company did not have any access to it. When Facebook, the greediest amongst among the IT giant companies, took over, it changed the policy. Mark Zuckerberg announced that some aspects of the data of users of Whatsapp would be shared with Facebook. The main source of revenue of Facebook is on sale of details of users of Facebook not only with companies but even political parties for a huge price. It is alleged that Facebook through Cambridge Analytica shared information on US voters with Donald Trump.
Facebook is also accused of colluding with Narendra Modi during both the 2014 and 2019 elections. The head of Facebook in India Kirthiga Reddy has openly admitted Facebooks is biased towards the BJP. Facebook has no morals. It has no belief in the privacy of the individual. It is a hard core commercial organisation. Mark Zuckerberg would even sell information relating to the shopping habits of his parents, including the sanitary paper they used in their washroom. The Indian government has directed Facebook not to change the Whatsapp privacy policy. The judiciary, however, has dismissed a writ petition against the new Whatsapp policy, pointing out that use of Whatsapp was voluntary. If any user did not agree with a new policy, which would permit disclosure of details of the user, they could shift to some other platform.
Indeed, millions of Whatsapp users have shifted to Signal App which started by Brian Acton, a former partner of the founder of Whatsapp Mark Zuckerberg. Many European countries have banned Whatsapp following the change in its privacy policy.

AND a few stray thoughts on the shocking victory of the Indian cricket team over Australia in the fourth test. The victory was all the more sweeter as none of the traditional stars like Virat Kohli were members of the winning team. Crippled by injuries, the team which took the field for the fourth test was a B team or even could be considered a C team. Most of the players were either new comers or those who have a poor record like Rishabh Pant.
The Indian team had to score 329 runs on the fifth day of the test match to win not just the match but the series. India had never won a match at Gaba, where this test match was played. This was a same team which was dismissed for 36 runs in the first test match.
The Indian team was playing in a hostile environment. Both the crowd and the Australian players were hostile to the Indian team. Historically, the Indian team has been dominated by the middle class. The profile of the players has changed with one of the heroes of the unbelievable victory in Gaba, being Mohammad Siraj, the son of an auto rickshaw driver, who lost his father during the tour. Siraj was racially abused at Sydney. Siraj emerged as the hero of the Indian victory claiming five wickets at Gaba and 13 in the series. He was complemented by Natrajan from Tamil Nadu Who claimed three wickets. The most amazing performance came from Shardul Thakur of Palgar near Mumbai, who became the first Indian to take seven wickets in a test match.
Wicket keeper Rishabh Pant, who replaced Mahendra Singh Dhoni, was the man who led the team to victory along with his captain, Ajinkya Rahane, which means invincible. The reason why I am including the amazing Indian victory against Australia here is to dramatize that anything is possible if you have the will. This message is for political parties like the AAP and perhaps even the Congress, who can defeat Narendra Modi in the next parliamentary elections, if they show the same spirit as the Indian cricket team did in Australia.

AND a few stray thoughts on the Maharashtra State government examining action to be taken against Arnab Goswami, Editor-In-Chief of Republic Television. Arnab has been now accused of an even more series charge by Maharashtra’s home minister. In breach of the Official Secrets Act, 1923, Arnab is accused of leaking sensitive information on the Pulwama and Balacot strikes. The Maharashtra police discovered this when they intercepted Whatsapp messages between Arnab and the Chief Executive Officer of the Broadcast Audience Research Council (BARC). It is the BARC headed by Partho Dasgupta which determines the ratings of various programs and channels on TV.
In affect it is the BARC which informs advertisers of the Television Rating Points (TRP) ratings which show how many people watched each program. Earlier Arnab was accused of manipulating the TRP of Republic Television by bribing residents of Dharavi, a slum in Mumbai, to keep their TV sets tuned on to Republic 24×7. The TRP ratings are decided by persuading a sample of the viewers to keep a monitor like your set box on your TV which will indicate which channels you have been watching. A government appointed committee has suggested minimum sample size for TRP ratings should be five lakh homes instead of the present 50,000 rooms.
It looks as though this time even the Modi government and the SC will not be able to protect Arnab as violating the Official Secrets Act is a very serious offense attracting more than ten years imprisonment.

AND a last stray thoughts on the sad demise of veteran Freedom Fighter and activist Gurunath Kelekar. Gurunath Kelekar did not stop being a fighter after Liberation. He continued to fight for causes dear to him. It was Gurunath who set up MARG, intended to educate children on road culture, and this must be credited for saving hundreds of lives. It is not widely known that Gurunath Bab authored 25 publications, including a translation of Mahatma Gandhi’s autobiography “My Experiments With Truth” in Konkani. Gurunath bab was given the Sahitya Kala Academy award for his translation of Gandhi’s autobiography. Very significantly, Gurunath Kelekar, ran a fortnightly – “Novem Goem” which later converted into the weekly “Goencho Mog.” My Romi Konkani friends would be delighted to note that both these publications were in the Romi script.
Unlike many Konkani leaders, Gurunath Kelekar deplored the language script divide amongst Konkani lovers. He refused to accept that only Konkani in the Devenagiri script is genuine Konkani. Gurunath believed that all lovers of Konkani should take an inclusive attitude and respect Konkani written in any script. His love for Konkani was so great that he suggested that instead of saying good morning to each other, we should say Borem Goem!
Gurunath Kelekar remained a Gandhian till his last breath and lived independently alone in Margao, though both his daughters are doctors, Dr Chitra Zuvarkar and Dr Sanjeevani Keni who are Panjim-based, and his son Samir Kelekar is a cyber-security expert based in Bengaluru.