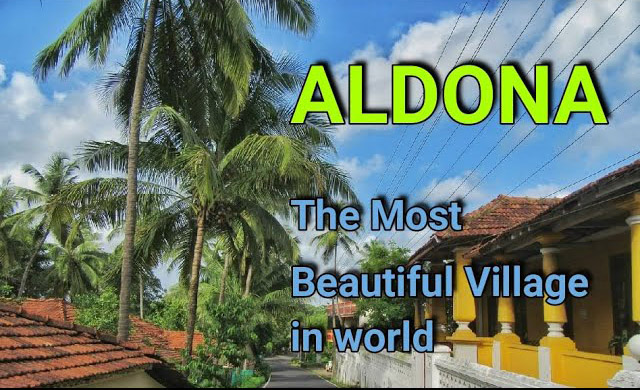 SHATTERED: The peace and quiet of the green Aldona village which has attracted a lot of people from Delhi and Mumbai will be shattered if jetties are set up as proposed by the fisheries minister.

The Rs400 crore that is being allotted for Goa fisheries industry is a smokescreen for building more jetties for the transport of coal. The Centre is also trying to corporatize the fishing industry in Goa with multinationals and big Indian companies reaping the benefit of the abundant fish availability in Goan waters….even khazan lands which are the granary of Goa may not be spared.

UNION Minister for Fisheries Giriraj Singh has announced in an interaction with the media at the Raj Bhavan, that the Centre proposes to invest Rs400 crore for fisheries, animal husbandry and dairy industry in Goa. This will primarily be used to create reportedly 30 jetties, apparently for the benefit of the fishing community. But we have a strong suspicion that these jetties are being set up also for the transportation of coal for Adani coal! There are as many as four jetties proposed in Aldona alone and undoubtedly it will destroy one of Goa’s few peaceful green villages of Goa.
The suspicion that the jetties are more for the transportation of Adani coal is reinforced by Home Minister Amit Shah’s statement that the Central government is determined to go ahead with all three linear development projects which many in Goa say would impact Goa’s green environment.
The controversial three linear projects concerned are the double tracking of the South Western Railway, expansion of the highways and the 400KV mega power station at the heart of the Mollem wildlife sanctuary. Historically, Goa’s mining industry has been building and using jetties on riversides close to where the mining activity is taking place. The iron ore was transported to the jetties by road. From there it was transported by huge barges to the Mormugao Port Trust harbour wharf to be lifted to ships for shipping out to the rest of the world.
We strongly suspect that the 30 jetties which the Union fisheries minister came to Goa to talk about may be a smoke screen. It is quite possible that apart from helping fisheries the real purpose may not benefit the fishing community as much as it would benefit transportation of coal for the growing Adani coal and steel empire.

IN the meanwhile we have discovered that the 400KV power transmission station in the middle of Mollem wildlife sanctuary will also affect other parts of Goa. In an attempt to improve the power supply, overhead transmission lines are already coming up in various villages of Goa. For instance, the residents of Aldona have already been informed that there is already 200KV transmission line over the fertile agricultural paddy fields of Quitla. Will these lines eventually connect up to Mollem’s 420 watt transmission station? This could be fraught with dangerous implications for the farmers of Aldona and other villages (where villagers work in their fields during the rainy season, when moisture content is very high). A 400KV transmission lines would radiate strong amounts of EMF [electro magnetic force) which is strongest in the direction of the ground since earth has its own magnetic force. Water is a good conductor of electricity!
So if these 400KV transmission lines pass through fields farmers will not be able to work in the fields for fear of inadvertently being exposed to electrical shocks unguarded moments and lack of maintenance of overhead transmission lines. It may well mean loss of livelihood, loss of income and food insecurity. Why should the people of Goa allow such strong transmission lines to pass through their fields for the commercial interests of an Adani? Goan peoples’ human rights need to be protected and respected by the government of India!
Overhead transmission lines across villages are high tension lines which could cause severe fatal shock if incidentally broken or touched by local villagers. Why shouldn’t power lines not be laid underground as in capital city Panjim? As far as the jetties are concerned, we understand from alert citizen journalists, that some Panchayat members have already given the green signal for the setting up of the jetties.
The main villain of the destruction of the environment of Goa is really Minister for Roads and Waterways Nitin Gadkari. The Central government is attempting to nationalize the rivers though this has been objected to by the Supreme Court. Rivers fall in the Concurrent List of the Constitution, which means that both the Centre and the State have jurisdiction over them. So much so that the Centre cannot take over any river within the jurisdiction of specific states. But as we have seen from the diversion of the Mhadei River, which is the lifeline of Goa, BJP-ruled states can use their political clout to the disadvantage of Goa.
It is shocking that the government of Goa instructed its own senior advocate Arvind Datar not to oppose the Mhadei tribunal award in favour of Karnataka. Both states are BJP-ruled. But Karnataka, with a much larger number of MPs in Parliament, is much more important to the BJP than tiny Goa with only three members of Parliament. Even more importantly the BJP hold on Karnataka is the entry point of BJP’s conquest of the south.
Unlike in the north and west of India the BJP has not been able to capture power in any of southern states. The Karnataka chief minister, BS Yediyurappa, was initially forced to resign because of corruption charges. However, in the last election the BJP manage to defeat the Congress to return to power in Karnataka.
It was the late Manohar Parrikar who as chief minister of Goa gave the BJP a helping hand to win the Karnataka elections, by sending a letter to the then Leader of Opposition Yediyurappa, claiming that Goa is willing to permit Mhadei diversion of water for drinking water purposes. The BJP is trying to take advantage of the confusion in Tamil Nadu to attempt to establish itself as a force which would be able to form the government in a collaboration with AIDMK (All India Anna Dravida Munnetra Kazhagam). Similarly the BJP is making attempts to strengthen its position in Andhra Pradesh and Telangana.

ANOTHER major threat to Goa is the proposal of the BJP government at the Centre to take over all the major ports in the country. Amongst the ports that the BJP wants to take over is the Mormugoa Port Trust. At the moment the MPT is under the River Navigation department of Goa. Which is why Nitin Gadkari is finding it so difficult to convert it into a dirty cargo port.
There have been repeated attempts to increase the coal handling capacity of the MPT. When the mining of ore resumes it will further add to pollution of an already polluted environment. The ideal means of increasing revenue for the MPT would be to expand it into a port to attract cruise liners, in keeping with Goa’s image as a leading tourism destination. But this will not happen because ruling party MLAs and ministers have a stake in the import and transport of coal. Milind Naik, the BJP MLA from Vasco, has admitted that he owns the transport company which takes the coal from the port to its destinations in Karnataka.
On Sunday, February 7, the Himalayan state of Uttarakhand was seriously affected when a glacier in the Himalayas broke up and an avalanche descended into the river Ganga tributaries. A glacier is huge river of frozen water before it turns into water at lower levels. However, growing climatic temperatures can lead to glaciers breaking up at higher reaches of mountain country when huge avalanches and rush of glacial water is released downstream to cause heavy flooding and washing away of mountain villages located near riverside.
Hence, the latest mountain tragedy in Uttarkhand where mega dams are being built to impact the melting of glaciers and unleashing of avalanches and floods downstream. Reportedly, there are already more than 50 casualties with the search on for more villagers who may be trapped under the rubble of the avalanche. The glacial avalanche may have destroyed some of the most pristine natural attractions of the mountains of the Himalaya including some of the Char Dam pilgrimage sites and the Valley of Flowers of Joshimath.
Pilgrimage to the holy shrines of Badrinath and Kedarnath may be affected in the coming summer months for as the heat sets in there is fear of further avalanches once dam building has commenced drilling into hard rockscape. For Hindus the Char Dham yatra which includes visiting the temples at Badrinath, Kedarnath, Gangotri and Yamunatri is akin to pilgrimage to Mecca-Medina for Muslims.
It is being rumoured that even the ancient Ganga-riverside town of Varanasi or Benaras may be affected by avalanches triggered by what happened last Sunday. Varanasi is considered as the most holy of Hinduism’s pilgrimage places and this is from where Prime Minister Narendra Modi was elected to Parliament. The people of Varanasi may have something to say to him!
The sudden collapse of the Nanda Devi glacier in the mountains of the Himalaya and flooding tragedy in Uttarakhand is a warning to the Modi government, as to what could happen to Goa if it goes ahead with the three controversial projects bound to impact Goa’s fragile Western Ghats forested environment. Already the small state of a green Goa has been concretised by uncontrolled building boom. Everyday new building projects by builders coming into Goa from the big metros of India are being announced.
Take a look at the Kadamba plateau which was once upon a time part of Goa’s rich ecology, it has been more or less destroyed by wanton urbanisation. Ironically, the State’s Chief Minister Pramod Sawant, is asking for funds from the Centre for hinterland tourism! Which essentially means attracting tourists to the hinterland village charms of quiet, serene Goa.
But the obsession of a Nitin Gadkari with his obsolete notions of development and to convert Goa from a tourism haven into a state of highways and a hub for dirty cargo, allied with free unplanned expansion of the construction industry in Goa will be in the long run be as big a disaster as that of the glacial avalanche tragedy in Uttarakhand.