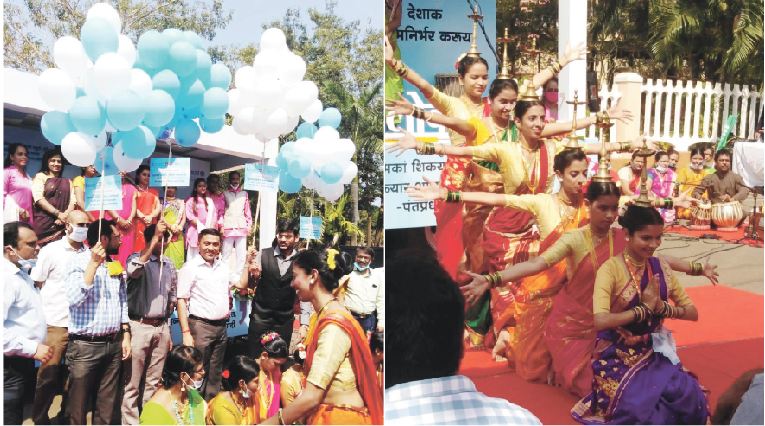 CAMPAIGN FOR COVID-19 FLAGS OFF! Chief Minister Pramod Sawant set the ball rolling by urging Goans to get vaccinated against the Covid-19 contagion at a cultural function at the Altinho Joggers Park on February 12, 2021. The Atma Nirbhar Bharat-Field Outreach Bureau is entrusted with educating and motivating people through cultural programs which will travel to 60 destinations in Goa in a specially designed bus and a troupe of Shree Ganesh folkdance artistes from Mapusa. CM released blue and white balloons and posed for photographers along with the colorfully attired artistes. Asked if he too is going to take a Covid-19 vaccine, he quipped: “At the moment my antibodies are very high!” No need for vaccine. (Pics by Tara Narayan)

THE list of foreign celebrities voicing opinion on the on-going farmers strike in India prompted India and Indians to play the ‘internal affairs’ card. The most apt response to this came, once again, from first time MP Mahua Moitra of the TCP, West Bengal. I do hope Goa MPs were present to hear the same. If not, they can at least take the online class!

Press reports in Goa reported that the South Goa MP promised to take up the objections to linear projects in Goa in the Lok Sabha. Did he do this? It is rather strange when people want to change the rules when they are embarrassed. The last days of Donald Trump at the White House inspired a lot cartoons on social media, happily and fearlessly forwarded in India. ‘Black lives matter’ sentiment has been tweeted more than 5,00,000 times a day in July 2016. This is a great movement to ensure that human rights are not violated. Remember, these are individuals and not governments and there is no power wielded by them to interfere in internal matters.

The WHO has instituted the Universal Declaration of Human Rights which all member states have signed.  In  Article 5. No one shall be subjected to torture or to cruel, inhuman or degrading treatment or punishment. WHO has already written to India on the handling of the farmers protest. The conditions prevailing at the site of protest is not a picnic. Does anyone know if any of the protestors have died? If so, how many?

IT is shocking for Goans to see how many innocent lndians are baselessly asking for repeal of the farm laws gifted by the government of India after a prolonged wait of 70 odd years!

They say majority of the so called farmers, claiming 10 states, demand repeal? So, they do not bother to know we have about 30 states and can 10/30 be a majority? Totally wrong and misleading! The very fact that none of them feel confident discussing  with the government of India or Supreme Court, sounds undemocratically adamant and vague.

After exposing themselves poorly and shamelessly the 5-star organisers have sheepishly surrendered to the Opposition, including Khalistanis and allowed them to hijack the agitation in the garb of a hate Modi campaign!

These good-for-nothing looting and losing neta have no love left for the motherland. They have illegally arranged for funds and facilities from Delhi, Punjab, Haryana, Mumbai, Kerala as well as China, Pakistan, UK, Canada, US…nose-poking enemies to run the most despised luxury show of the decade! This anti-national protest is a malicious plot to dissuade international industries intending to shift to our country, following the best efforts of our performer, reformer, former son of a tea-seller and now a solid pillar of the world.

Giving wrong media-weightage by hiring some inconsequential international bacchi, who know nothing about our farming, is also the brainchild of our beaten politicians. Misguidance at its peak! It is no secret how Badals and Pawars have crossed all barriers of human values to amass billions, in the name of “poor” farmers. These brands of commission-agents are forced to enjoy diarrhea, with the passage of the perfect laws. Avoiding such agents, our farmers last season have earned well. This talks well about the success story.

Insulting our world-renowned cricketer, just for asking to unite, is the ghastliest thing that has happened in the recent past. Touching our Bharat Ratna inappropriately for selfish goals is as good as the massacre of thousands of Sikhs in 1984. Please remember that our elected government of India works on the basis of strong lndian culture; but, the Opposition vultures know nothing beyond Modi-hatao!

THE Uttarakhand glacier tragedy is also because of  climate change and lack of proper development. For years environmentalists have been crying themselves hoarse about the model of development being followed in our fragile mountain ecosystems, and yet nothing changes. This is a clearly a  man-made one although we may call it a natural calamity.

We have childhood memories of incessant rains in Goa during our schooldays when it poured non-stop for even eight to 10 days. But there was never ever such flooding all over like we are witnessing in recent years. The nature’s fury that the State has been facing has been predicted for years by our environmental scientists Dr Nandkumar Kamat and Dr Joe D’Souza but it has all fallen on deaf years, with the authorities conveniently taking no corrective measures.

The colossal environmental degradation that Goa has been witnessing over the years by way of rampant destruction of hills, fragmentation of pristine verdant landscapes and ruthless massacre of trees, not even sparing low lying fields by pouring concrete in them…has finally shown us the impact of such criminal interference in Goa’s age old natural ecosystems.

Traditional drainage systems, waterways and outlets for natural flow of rainwater are choked all over with no functional drainage system in place. The capacitance Goan communities built over centuries with their time tested strategies designed to secure us from flooding, that we ourselves witnessed in our childhood, are now all gone.

Lack of proper planning and mushrooming of environmentally incompatible constructions all over, without first laying the much needed ground infrastructure, has landed Goa in the present chaos. With political blessings the real estate mafia has swiftly enriched itself manifold, leaving the common man to face the brunt of environmental pollution. Farming never suffered so much at any point in the past as today and nature is kicking back as they say.

Goa has been a beautiful accident of history endowed with abundant resources. But the foolishness and rampant greed of those in power has brought this state to a stage in history, when one day Mother Nature may crack the whip! Goa as we can already see is threatened by a rising sea level, we will simply be wiped out from the face of this planet. Before that happens may better sense prevail.

CLINICAL trials and statistical data on the efficacy of the various vaccines have brought to light a variable degree of effectiveness vis-a-is people in different countries; as well as differing efficacy to the various variants of the Covid-19 strains. It may be argued that people with a high degree of immunity due to robust physical and mental health, nutritious diet, intake of immunity boosters, hygienic environment and unpolluted ambient air quality, may not need to be vaccinated as their resistance to diseases is very high. Still those who are vaccinated may also exhibit variable degrees of resistance to the particular vaccines because of variable built-in immunity to disease.

For example, vaccinated people with a particular vaccine with say 70% efficacy may not contract Covid-19, or exhibit variable degrees of resistance to the disease. Some may not be so vulnerable while others may exhibit average susceptibility and still others most vulnerable due to lack of strong immunity system. This can be because of co-morbid conditions that weaken the immune system and make them more susceptible.

Any vaccine, inoculated to various people may thus have varying degrees of protection from Covid-19. Some exhibit high immune responses, having strong immune systems, while others may even be marginally protected from Covid-19 merely by vaccination. However, since vaccination builds anti-bodies and T-cells, getting vaccinated may be the better option with varying guarantees.