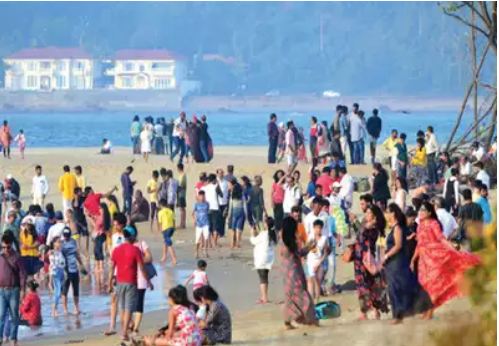 REFUGE: Goa has become the most popular destination for those seeking to escape the Covid-19 blues. The beaches and the five stars are full not with charter tourist but residents of Delhi and Mumbai who are buying holiday homes worth crores in Goa, they are even taking over the villages, converting what they believe are old Portuguese villas into plush villas.

BY Shobhaa De in Straight Talk

The popular Mumbai columnist describes how Goa has been taken over by the Delhiwalas who have converted it into a Gurgaon. They only interact with each other and party on the beaches in their designer clothes and high heels…..

A week in gorgeous Goa, and I have returned with my batteries recharged, feeling rejuvenated and refreshed. Goa does that to us old timers, who have been visiting this jewel of a destination for more than three decades. So… what has changed and what hasn’t, you might ask. Here’s the downside first — Goa has been turned into Gurgaon. I swear! I hardly met or saw, much less spoke to, any Goans. Where have they all fled? Are they in hiding? Come on… What is Goa without the loveable Goans? As of now, it has become an extension of Delhi — some areas are like those Delhi enclaves. Goa is infested! One mainly hears conversations in Punjabi/ Hindi/ Haryanavi everywhere. The posher Goan villages are swamped with Richie rich Dilliwallahs, who live the Golf Links life as if they have never left the Capital! Some of them ain’t going back! They’ve survived the pandemic in style here, bought property, discovered beaches… and… and each other! They hang out only with other Dilliwallahs, party together and generally carry on like they are still in Mehrauli/ Chattarpur, enjoying the good life at half the cost!
Imagine arriving at super casual Goan beach shacks in designer wear! Shudder! Ladies totter around on high heels, with fancy shades kept on indoors, while their men strut about swigging local craft beer and discussing deals at full volume. Khan Market comes to Mapusa — as it were! And Goans are not amused. They’d just about managed to get rid of the menacing Russians and Israelis — and now this onslaught! The upside to the invaders from up North is that a sluggish economy is bouncing back gradually — after all, Goa attracts more tourists than almost any other state in India. Along popular routes which once boasted of charming organic cafes, one sees versions of Punjabi dhabas offering chhole bature, naans, tandoori roti and butter chicken. Most of the five star hotels are completely booked by ‘Northerners’, who refuse to eat the absolutely scrumptious Goan cuisine and demand stuffed parathas at ungodly hours. One frustrated chef held his head in despair as he mentioned the constant request for all things ‘karaari’. Heavens! Kids ask for ‘karaari omelettes’, he groaned, “This is really too much — my boys cannot manage.”
All those charming boutiques which used to sell floaty cotton kaftans and beach wraps, now stock fake designer wear from China — shiny gowns and blingy outfits of a dodgiest kind. The Delhi memsaabs have super imposed their own ‘look’ on unsuspecting locals, who are totally bewildered by the ‘brands’ parading around or spilling out of SUV’s, with nannies clad in Madam’s last season’s discards. Flashy new clubs and restaurants have sprung up across Goa, with only a few well-kept secrets, which attract a certain kind of visitor. The only music floating over the waves is bhangra, with blinding lasers criss crossing the sky over weekends.
Despite this daunting scenario, there are still far too many wonderful aspects of life in Goa, which have steadfastly remained the same over the years. It’s just getting harder and harder to experience them! We were lucky that we met extraordinarily kind and loving people, particularly the affable GM of the Taj Fort Aguada and the ever popular Taj Village. Anmol Ahuluwalia, you deserve a huge shout out for all your marvellous efforts with local communities during these past few, very tough months! His was the only hotel that managed to stay open during the lockdown, and his approach was honest and simple; he told whosoever called asking for help and shelter to come and stay with him. “Pay us whatever you can afford, and we will share with you whatever we have in stock.’’ Stranded foreign and Indian tourists, embassy personnel, others who had run out of food and funds and basics — they knew they had a home at the hotel with heart.
Getting back to Mumbai felt good… and a bit blah, too. It was only when I realised how I take aamchi Mumbai so much for granted, and how fabulous our city is, that Goa receded a little — only a little. I plan to watch Bombay to Goa over the weekend… and revisit a few exceptional memories of this amazing Goan getaway.