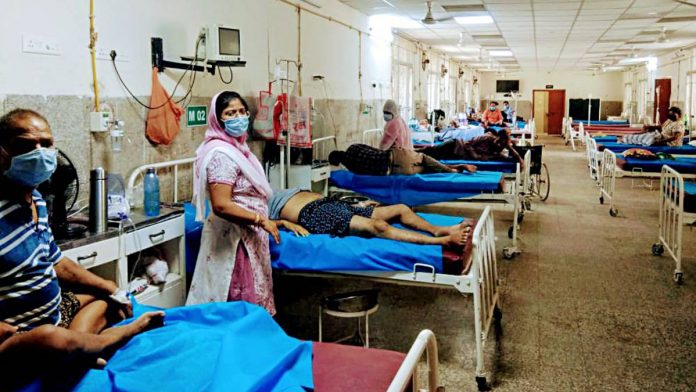 PATIENT FLOOD: The offices of the mamladar and deputy collector who control the collector’s office enjoy vast powers without any responsibility. They are considered as the most corrupt of government departments.

The double or triple mutant variant which spreads much faster and targets the young is a combination of the Indian and UK variants. Many countries including the UK and the US have stopped Indians from coming in as this mutant strain has surfaced in their countries.

As The country has been facing another wave of the coronavirus pandemic with the number of cases rising every day, several new variants have been coming up of the virus, SARS-CoV-2, which causes COVID-19. On Wednesday (March 24), the Ministry of Health and Family (MoHFW) said that the scientists who have been studying the genome (the complete set of genetic information of an organism) of the novel coronavirus have identified a “double mutant” variant in the country. It said that this new variant has been detected in samples from some states and Union Territories including Maharashtra, Kerala, Andhra Pradesh, Telangana, Delhi, Gujarat, Punjab among others.

What Is The “Double Mutant” Variant?

According to Dr Rakesh Mishra, the Director of Center For Cellular & Microbiology, in Hyderabad, where the ‘double mutant’ variant was first sequenced,
Mutations in viruses are common. Like all viruses, the coronavirus keeps changing in small ways as it passes from one person to another. However, most are insignificant and do not cause any change in their ability to transmit or cause infections. Some though, like the ones in the United Kingdom or South Africa, can make the virus more infectious and, in some cases, even deadlier.
Earlier in the pandemic, only one mutation was seen in the spikes of the receptor of the virus that helps in binding the virus with host cells. Receptors in the virus produce an immune response in the host body. Over the past year of the pandemic, thousands of such mutations have been identified, said Dr Mishra. He explained that a ‘double mutation’ is when two mutated strains of a virus come together to form a third strain.
The new mutation reported in the country on Wednesday is the result of the combination of the E484Q which is an indigenous strain and L452R, a foreign strain.

Is The New Mutation Another ‘Variants Of Concern’?

According to Dr Randeep Guleria, Director, AIIMS-Delhi, because the mutations in the virus are normal and expected, the medical community’s concern lies in what is called as the “Variant of Concern”. He further explained that these “Variants of Concern” are those variants that have some clinical consequences like either those mutations cause an increase in the number of cases or cause more severe cases or cause more mortality or have an immune escape mechanism which means that the people who have already suffered COVID-19 have a high chance of reinfection and those who have been vaccinated are not protected adequately even after being vaccinated. Currently, as per the Union Health Ministry, there are three previously discovered mutations- first noticed in the United Kingdom, South Africa and Brazil which are the “Variants of Concern”. These variants have, so far, been found in at least 18 states and UTs.
Explaining about the concerns related to mutations, Dr Sushila Kataria, Senior Director, Internal Medicine Department, Medanta said that some mutations in the spike gene can make the virus more virulent or can help the virus become more resistant to the antibodies and thus escape the body’s immune response. A combination of more than one mutation can enhance this in the virus. However, according to Dr Mishra, as of now, mutations cannot be deemed responsible for the surge in COVID-19 cases in the country. He said,
The new strain is efficient, but it is not yet a super spreader. There is no reason to believe that it is more deadly, just yet. But more investigation is required to understand this.
Nevertheless, what is confirmed, according to the experts is that as long as the virus is allowed to spread from person to person, more variants are going to form. Too many mutations can affect the efficiency of vaccines, said Dr Kataria, adding that even though there are vaccines available, there is still a need to stop the virus from spreading.
While talking about the impact of the new variant on the effectiveness of the vaccines- Covishield and Covaxin that are being used currently for inoculating people against the coronavirus, Dr Mishra said,
So far there is no reason to believe vaccines in India – Covishield and Covaxin – will not work against these new strains. But experts say the time has come to bring more vaccines to India. Vaccines developed by Pfizer and Moderna have better efficacy rates and have been proven to act against the new strains. This is the need of the hour.
The Union Health Ministry said that Genomic sequencing (a testing process to understand the complete genetics of an organism) is being done by the Indian SARS-CoV-2 Consortium on Genomics (INSACOG), a group of 10 national laboratories under India’s health ministry, and epidemiological studies are continuing to further analyse the situation. So far, the bulk of infections linked to this strain – around 20 per cent – have been reported from Maharashtra – 206 cases, the ministry added.
Coutersy:www.swachhindia.ndtv.com