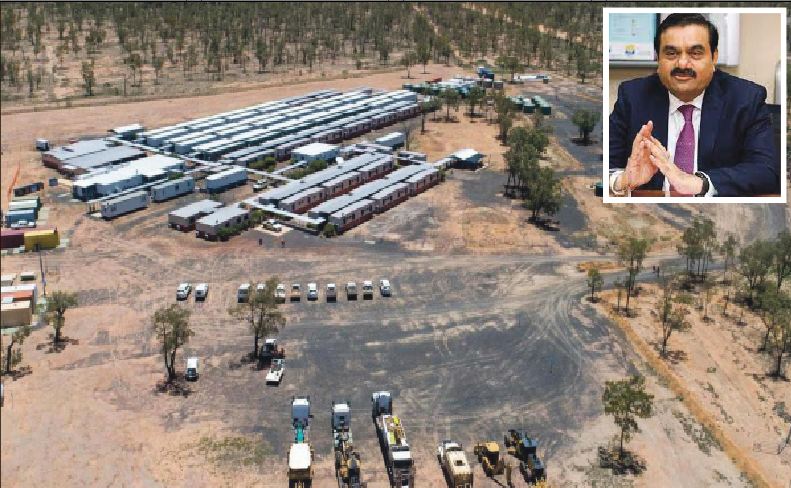 PROTESTS: Coal spills over during its transport from MPT to Karnataka by the South Western Railway and the expansion of the national highways. Nitin Gadkari has admitted that the centre has spent Rs 12,000 crore to strengthen the infrastructure for the benefit of Gautam Adani (above right inset). Thermal power generation is the biggest polluting factor with serious impact on the quality of climate worldwide.

Despite a pledge by nations around the world to cut down sharply on the use of coal, which is a major contributor to drastic changes in climate, the Adani group continues to increase coal production and imports at the expense of the tourist paradise Goa.

THE ADANI Group is doubling its coal-fired power capacity to 24 gigawatts, plans to own, develop or operate new coal mines with a combined capacity of 132 million tons a year, and is pursuing oil and gas projects, including a partnership with France’s Total Energies SE, according to a report published Monday by environmental non-profit Market Forces. The Australia-based organisation, a vocal critic of Adani’s Carmichael coal project in Queensland, said its analysis is based on data from across several Adani holdings.
Taken together, these initiatives show a company that is making a significant negative contribution to global warming rather than preparing for the energy transition, said Pablo Brait, a campaigner at Market Forces. The findings may increase scrutiny on the India-based group and its founder, who is rapidly rising up the ranks of Asia’s richest people and earlier this year signed one of the continent’s biggest clean energy loans with 12 global banks.
While almost all of Adani’s coal assets are in India — where the government says it can’t prioritise eliminating emissions without sufficient financing from richer nations — it is facing growing pressure from activists and some investors over the Carmichael project.

POLLUTING COAL
A representative for the Adani Group didn’t respond to an email and call seeking comment. The conglomerate will transition to carbon negative “by carefully balancing our energy migration,” Gautam Adani said at the India Global Forum, without providing a timeline. He added that a shift away from cheaper fossil fuels “should not crush the aspirations of the thousands that lack electricity.” Coal currently contributes to almost 70% of India’s electricity production, though that share has been declining. While addressing his group’s shareholders on Monday, tycoon Adani said Adani Green Energy Ltd. became the world’s largest solar company in 2020 and after a recent acquisition, has reached its renewables target of 25 gigawatts four years ahead of schedule. “I know of no other organisation in the world that has accelerated its renewables footprint as rapidly as the Adani Group,” he said.
Market Forces’s Brait said the report was partly prompted by conversations with banks, including Barclays PLC and Credit Suisse Group AG, which said they were willing to finance Adani because it was a company transitioning to clean energy. Officials at Barclays and Credit Suisse declined to comment. “A lot of finance sector companies are increasingly making pledges around climate change and fossil fuels, but Adani is really a test of those commitments,” Brait said. “Because if you are still prepared to support a company that’s so heavily invested in new fossil fuels, then you need to re-examine your commitments and make sure they have some teeth.