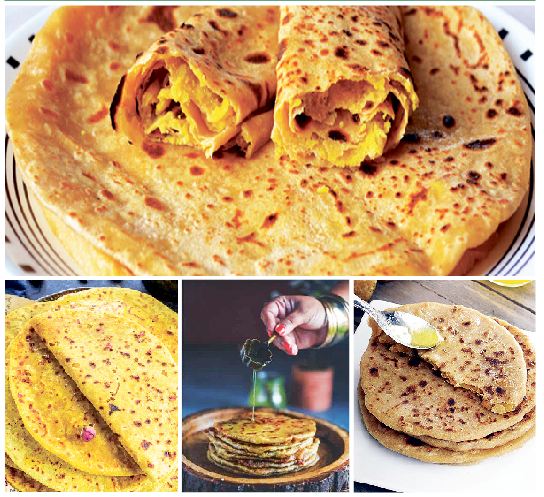 PURAN POLI RAZZMATAZZ: Do you know there are some 20 kinds of puran poli in India…at last count! Here are glimpses of some of them, puran poli is surely one of our national foodie treats across India? The Gujarati puran poli is thick and sweet, the Maharashtrian puran poli large and thin, the south Indian puran poli is originally a jaggery-sweetened one and has crisper fine notes. All puran poli are welcomed by most Indians and nowadays novel puran poli may feature fruit puree and various kinds of chocolate!

IT was one of those rare joyful moments of wallowing in a treat of bygone times. Over the new year weekend my friend Amita Ghanekar, who lives downstairs where we are living currently, called to tell me she is giving me some puran poli. So New Year day lunch I found myself drowning in nostalgia…no, not so much over the puran poli Amita gave but in memory of the puran poli my mother used to make once upon a time! Listen now, puran poli is pretty much national fare across India from Gujarat to down south Tamilnadu – with slight variations.

These puran poli which Amita gave me were from Goa and wafer thin large affairs and I always think it is gross to call them sweet roti – you may not call them anything but puran poli!   So I looked at these large, thin, sweet gram puree filled puran poli and obeyed Amita instructions: “All you have to do is heat them up one by one on a pan and put ghee on it before serving…” The puran poli  bloomed up on the tava and a heady aroma of ghee filled the air – which reminds me at the recent Goa Tourism expo, I’d bought a small bottle of  the “Verka” cow’s ghee from the Punjab and it is so good. But to concentrate on the puran poli I ladled over the ghee and turned it over so that it bloomed and acquired a crispy texture here and there. I removed it on one of my much stainless steel thali and believe or not ended up eating two of the puran poli — with cucumber raita, with fresh mango pickle, with the “Society” onion and garlic chutneys (these chutneys are so good and the garlic chutney is better for it is without the ubiquitous coconut)!

Hey, I was eating puran poli after years and like I said it was a moment of déjà vu… suddenly I was lost in nostalgia memories of the flavors and textures of this all-Indian treat called puran poli. Now puran poli is a favourite festive recipe to make over auspicious occasions (of which there are many in India, a land of festivals and too many auspicious occasions).

I can’t make up my mind whether puran poli is more of Gujarati or Maharashtrian or Marwari origins! I vividly remember my mother making them when we were all young on the island of Penang in Malaysia. We used to call it “garee rotli” or “sweet bread.” That’s literal translation is “sweet rotli” and I dare say the puran poli is part of our amazing repertoire of unleavened breads which are staple food. Our collection of breads or roti or chapatti are usually cooked on a cast iron pan or seasoned terracotta ware. Of course, puran poli is the right way to call these roti.

The word “poli” would translate to a kind of light envelop, or fulka, that is light chapatti filled with some kind of mildly sweet or excruciatingly sweet filling called the “puran.” In Gujarat the puran is usually tur dal which my mother used to soak and cook until it was ready for the addition of sugar to sweeten it. Puran is usually of some dal, be it tur dal or moong dal, or you may be more adventurous.

The washed tur dal is washed and cooked over low heat till it turns mushy, sugar is added, then when the puree is setting crushed cardamom powder or seeds added in, or nutmeg gratings. The roti or rotli of fine  dough would be moulded out by hand into a small bowl shape, a dollop of the sweet puran tucked in and edges folded as if seamlessly into a ball. These are then very deftly rolled out and transferred on to a medium hot pan and cooked till done…laced with oodles of ghee. Piled up on a plate, dozens of thick fat puran poli,  aromatic and inviting…waiting to be eaten hot at best but don’t burn your tongue please. Eating hot hot and drinking hot hot is not the best way to eat anything for the preservation of throat tissues!

OH, I forget, my mother never put cardamom powder/seeds or nutmeg gratings in her puran poli or garee rotli, she used to add aniseed or “valyari” in the cooking puree and this made for that infinitesimal lovely flavour – aniseed you must know is one of our  traditional digestive seeds? Of course a puran poli meal is considered as an especially heavyweight meal to digest and I don’t mind confessing here that it is only when there were special guests coming over that my mother would make the fresh Guju puran poli for lunch.

When male guests were expected like a beloved uncle or brother or son! Lunch would be puran poli, the Guju buttermilk kadhi, perhaps a veggie of field beans with  caju bits mixed in, or it could be a prized “ringna-batata nu shaak” (brinjal-potato veggie redolent of groundnuts)…finally, there would be thin buttermilk spiked with salt and roasted cumin powder to wash down the meal. No water, never water at meal times! Home-made roasted papad, papdi (rice papad crunchy, nicer than regular papad),  the Guju range of pickles like choonda, gorkeri, khati keri and a red dry garlic chutney were side temptations.

Post-meal digestives or “mukhwas” would include a popping of roasted with salt, turmeric and lemon powder aniseed or “valyari,” “dhana ni dal” or some such mixture to promote better digestion. In Maharashtrian households you may  find a mildly spicy betal nut “mukhwas” which is much loved.  We have a whole host of much-loved post-meal digestives in India!

BUT to come back to the delights of Indian puran poli, down south India too you will find these large puran poli thinly lined with a lentil-coconut mixture and there are the similar “godpoli” which are very desirable, for here the filling or puran is sweetened with dark palm jaggery and not white sugar. Jaggery gives a more robust flavor. Instead of shudh desi cow’s ghee some of the puran poli are done in oil, perhaps groundnut or sesame or coconut oil. They may be softish or crispy but delicious. Puran poli have short shelf although you may store them in the fridge. Some versions last longer naturally…for over a week without “fungafying.” The crispy ones last longer naturally, the softer, velvety versions have to be relished the day they’re prepared.

Somewhere along the way everybody as they started growing up began to think oh, puran poli! They’re too much calories and because of their sweetness the diabetics had to rationed. “I am making puran poli today…” announcement by grandmother or mother or doting aunt no longer excited the young adults in the family though the women relished what the men passed aside as “too heavy!”

But to this day I remember how much we loved my mother’s “garee rotli” and flavorful buttermilk “kadhi.” That was enough, sometimes just with a fresh relish called  “kachi keri no chundo” – grated onion and   green mango, squeeze out liquid, add salt, grated jaggery, roasted cumin powder, red chilli powder if you wish, mix up and serve as a yummylicious alternative to sabzi or veggie dish.

SO my dear friend Amita Ghanekar, thank you for stirring up all my nostalgic memories of growing up with mother dear this new year by gifting me with some of your Saraswat Brahmin-styled puran poli – large, thin, translucently sweet roti to be laced with ghee and relished…I made jeera alu to go with them for that Sunday lunch. I think one must not call puran poli roti! Puran poli is puran poli. Just about everybody in a Hindu household knows what they are and welcome them during Ganesh Charturthi, around Deepavali or whenever some special guests are expected and have to be impressed. For my mother dear of course it was a labour of love. Puran poli anyone? Say yes! Never say yuk to puran poli, it will bring you bad luck…but that’s my take on this glorious recipe of traditional India.

Note: The Verka cow milk fat which I love so much is a product of the Doaba Co-operative Milk Producers Union of Jalandhar in Punjab, it’s a luscious pale yellow cow’s ghee. Real ghee, of course, has become very expensive in our times.

(These are delicious, sweet, dal filled chappaties, prepared by a number of Indian communities. Here’s the Gujarati way!)

For Poli: one and half cup wheat flour, 1 tsp oil, 1 tbs ghee per pooran poli,  a pinch salt, water to knead dough. .

Preparation: The tur dal: Soak the dal for 1 hour. Rinse twice and add 2 cups fresh water into the dal. Pressure cook upto 2 whistles. Put off the flame and set aside for half an hour. Remove the turn dal from the pressure cooker and churn with a hand churner or egg whisky till dal is thick and consistent. Set aside.

The poli dough: Make a well in the centre of the flour and add oil, salt and just enough water to make a semi-stiff dough. Knead the dough well and set aside. The saffron: Dissolve the saffron in 2 tbs of milk and set aside.

Method: To the thick tur dal add the sugar, the saffron dissolved in milk and mix well. Over a medium flame sauté the pooran dal until it is well mixed and all the water has evaporated. If any water remains in the pooran, it will be impossible ot stuff the poli with it. Cool the pooran. Add the yellow colouring if you iwsh and the cardamom powder. Once again mix very well.

Knead the cool pooran into a ball. Divide it into equal portions and make small balls of the size of a lime. Set aside. Similarly, knead the poli dough well and divide into equal portions. Roll out the dough up to four and half diameter, circular in shape. Place one ball of pooran in the centre on the rolled poli. Bring the edges together and pinch them close. Press the ball down to flatten it. Roll the pooran poli to quarter inch thick. Heat a tava on a medium flame. Place the rolled pooran poli on it and cook on each side till golden brown spots appear on the surface. Remove from the flame.

Serve hot. Pinch the surface of the pooran poli with two fingers and pour 1 tbs of ghee on its surface. Spread the ghee to allow it to percolate into the poli.