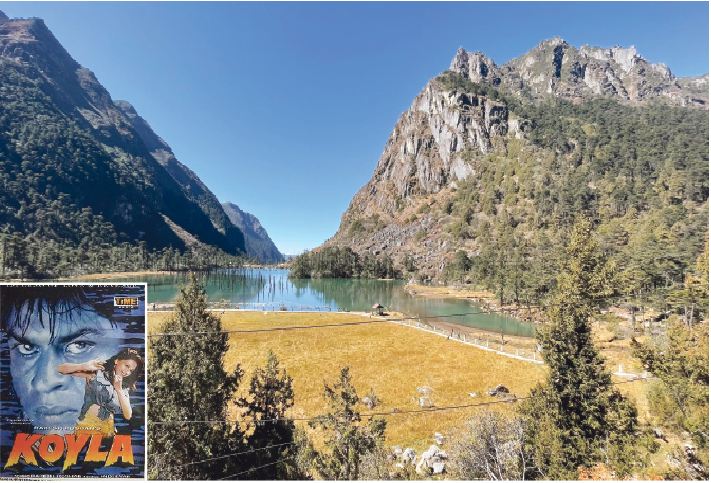 MADHURI: Sungetsar Tso lake, popularly known as Madhuri lake– as a dance sequence of her film Koyla was shot here. This is close to the Chinese border.

THE needless provocation by China’s Ministry of Civil Affairs after it announced on December 29, 2021 that it had “standardised” the names of 15 places in Arunachal Pradesh, has further strained relationships between the already two volatile neighbours. The move has been aimed to show how the Indian state of Arunachal Pradesh is viewed in Chinese maps. These maps repeatedly depict Arunachal Pradesh as south Tibet.
India’s Ministry of External Affairs (MEA) in response to the move said in a statement “Assigning invented names will not alter any facts on the ground and Arunachal’s status as an integral part of India.” This is not the first time Beijing has tried to poke the bear. In 2017 Chinese officials issued official names of six places in Arunachal.
The tensions between the two nuclear powered countries leaves Arunachal in a tussle between BJP’s motive to saffronise the North-East and China’s motive to destabilise the country through bogus propaganda.
The list of new changes issued by the Chinese authorities include eight towns, four mountains, two rivers and a mountain pass. The list covers 11 out of Arunachal’s 25 districts extending from Tawang in the west to Dibang valley in the north and Anjaw in the east. The move in terms of its geographical vastness in the state has been aimed to reiterate China’s claim over the entire state of Arunachal.

VISITING ARUNACHAL
LATE last year I visited a few places in the North-East. My father, a police officer, got transferred to Arunachal Pradesh after being inducted into the Indian Police Service (IPS) cadre. The AGMUT (Arunachal Pradesh, Goa, Mizoram, Union Territories) cadre as it is known is part of the State and Union Territories, where officers from the three civil services of the Indian Administrative Service (IAS), Indian Police Service (IPS) and Indian Forest Service (IFoS) may be posted.
After serving Goa for more than 30 years the Arunachal Pradesh posting came in my father’s penultimate year of service. Despite being a difficult posting owing to its remote geographical location as well as the mountainous river valley terrain of the state, my father welcomed the opportunity of a posting in Arunachal Pradesh, it would be a chance to experience a culture very much alien to most Indians of the mainland sub-continent.
The posting in Arunachal Pradesh also gave us, the family, an opportunity to visit with him, which in other circumstances we may not have thought of visiting. Our itinerary took us to Shillong (Meghalaya), Kaziranga National Park (Assam), Itanagar and Tawang (Arunachal Pradesh).
For me visiting Arunachal was a massive learning experience in terms of cultural diversity. Arunachal Pradesh has around 26 major tribes and more than 100 sub-tribes each with their own distinct language. What surprised me was the sense of patriotism these people had for India. One often hears about the indifference of people in the North East towards India, in comparison to the people of the Hindi heartlands.
However, and I kid you not, if you travel in Arunachal for a day you will hear more “Jai Hind!” than you will ever hear travelling the rest of the country in a week! About 90% of the state’s population can speak Hindi and it is the main medium of communication in public places like schools, colleges, churches, shops, malls and even the State Legislative Assembly.
Arunachal Pradesh is home to around 90 local languages, yet the state’s preference for Hindi as a common language sets it apart from its other North-East states where preference for the native tribal language is known to be very strong.
INTRIGUED by the wide presence of Hindi, I was curious to find out the reason behind the Hindi stronghold. Asking a few questions to the locals yielded some answers. The reasons for the popular use of Hindi were not of a very complex nature as it turned out and added to my education. Dugi, my father’s driver, a member of the Nyshi tribe, explained that in his own community he would converse in his distinct tribal language, but when he had to communicate with someone from a different tribe he had to make use of a contact language. Hindi has become the lingua franca! Historical and political factors have also played a role in spreading the predominantly north Indian language of Hindi across the North-Eastern states and especially Arunachal Pradesh.

BREAKAWAY FROM ASSAM
DURING independence the present territory of Arunachal was part of the tribal areas of Assam. In 1951 it was renamed as the North Eastern Frontier Agency (NEFA). During this period from 1950-1965, the entire region was administered by the Governor of Assam, who worked as an agent of the President of India under the Ministry of External Affairs.
In 1965, the NEFA was revoked under the administration of the Governor of Assam and placed under the jurisdiction of the Ministry of Home Affairs. In 1972 the NEFA was converted into the Union Territory of Arunachal Pradesh and in 1978 it gained recognition as a full-fledged state. This breakaway from Assam was not a peaceful one and caused many a border dispute between the two states and this remains a regular bone of contention to this day.

CHINESE AGGRESSION
THE popularity of Hindi can also be viewed in terms of the area’s volatile politics owing to its geographical location. During the 1962 Sino-Indo conflict, Arunachal was right at the heart of it. The huge presence of the Indian army at the time was deemed to be the first instance when Hindi was introduced in the region.
The army provided service in terms of opening schools and hospitals and hence it was imperative for the local community to have some sort of interaction. The Chinese aggression could have also played a role in the language policy by the Indian government. Hindi helped as a tool for the integration of NEFA into the Indian fold.
While the exact reason behind the extensive use of Hindi among the people of Arunachal Pradesh remains debatable, a significant consequence of the same has been the gradual dying out of several native languages in the state. In a survey conducted by UNESCO in 2017, it was reported that around 33 native languages are considered endangered, out of which four are on the verge of extinction.
In recent times efforts are being made to preserve the identity and cultural diversity of the region. However, the emergence of several external factors has resulted in cultural integration which has in a sense proved to be harmful to the state’s own identity.

ROLE OF RELIGION
THE emergence of the missionaries in Arunachal Pradesh has resulted in the Christianisation of the state much to the annoyance of the ruling Hindutva-driven BJP party. Unlike the other North-Eastern states like Meghalaya, Nagaland and Mizoram, where Christianity has been present for well over a century, Christianity was introduced into Arunachal Pradesh only fairly recently.
The spread of Christianity in the region has also resulted in reduced inter-tribal violence. According to Fr John Bosco, who is the parish priest of St Joseph’s Cathedral in Gorphur Itanagar, the spread of Christianity has reduced alcohol consumption and revenge killings. Before the evangelisation of tribes, the violence was such that even a minor accident on the road would result in bloodshed and violence inflicted with the use of traditional swords — or settlement was carried out with the purchase of a brand new vehicle!
While the evangelisation of the state has in some ways brought communities together, it has also resulted in the loss of indigenous culture and at his results in much heated argument between the people of the various regions in Arunachal. The indigenous people of Arunachal Pradesh traditionally follow an animist faith called “Donyi Poloisim” (Sun and Moon reverence and worship).

NUMBERS GAME
ACCORDING to the 2011 census, the number of Christians of various denomination has increased by 30%. This was followed by Hindus at 29.04% and 26.02% represented by other religions. However, these figures are mere data points and do not define the real story of the apprehensions and fears the tribal people of the state feel and suffer from.
According to Tsering Napso, who was our driver during our visit to Tawang, since October last year, there have been several religious controversial outbreaks. Christian organisations have accused the administration in the Tawang district of obstructing the construction of a building for the sole reason of it being a church and not a Buddhist monastery.
Tawang is the northeastern district of Arunachal Pradesh which is predominantly inhabited by the Monpa tribe. The Monpa people are adherents of various sects of Tibetan Buddhism. While the rest of the state has seen large scale conversion of people to Christianity this region alongside the West Kameng district referred to as “Mon” remains a Buddhist region.
There have been several vocal skirmishes between the Arunachal Christian Forum, the Arunachal Christian Revival Church Council and the Indigenous Faith & Cultural Society of Arunachal Pradesh (IFCSAP). The IFCSAP has alleged that the Church flouted building norms – the Church denied it.

A PLACE FOR ALL
WHILE large scale religious conversion and evangelisation has resulted in the loss of native indigenous cultures and ways of living, ironically, it has also brought about a sense of harmony amongst various tribes. It is important to understand that while Christian evangelists preach the word to the tribal natives, practices are not harshly enforced upon them.
Conversion continues to be frowned upon by the far-right Hindu groups. Perhaps more importantly, the government in power feels its presence in the region diminished with the introduction of Christianity. Arunachal Pradesh continues to struggle between various conflicts national and international even as it is perceived as one of the most beautiful states of the country.
I would say in conclusion that my trip to Arunachal Pradesh was an experience of a lifetime and a cultural education. It broadened my perceptions and perspectives about things which I had only limited knowledge understanding of – but that was before I visited Arunachal Pradesh! Today, I am considerably better placed to guide anyone seeking to visit Arunachal Pradesh in the near future.