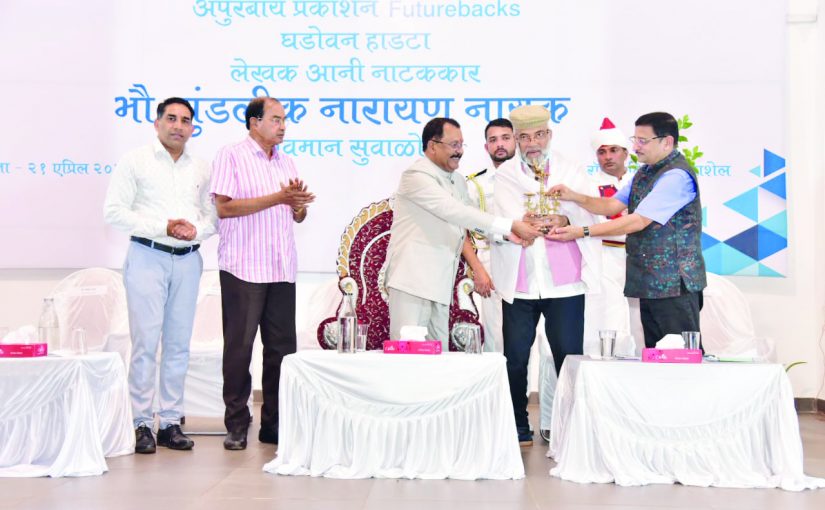 A CALL TO PROMOTE KONKANI: This call came from none other than Governor of Goa PS Sreedharan Pillai, after he felicitated noted Konkani writer Pundalik Nayak on his 70th birthday, at a function in Marcela on April 21, 2022. The governor added that Goa should promote Konkani language and literature in the state by extending a helping hand to needy writers and artists. Present at the function organized by Apurbai Prakashan-futurbacks were Minister for Agriculture Ravi Naik and Minister for Art & Culture Govind Gaude.
Reminiscing a little Governor Pillai observed that writers can create and transform a thinking society and in fact they are the true architects of society, “When Vasudevan Nair was conferred the prestigious the Jnanpith award in Kerala, everyone honoured him for his immense contribution.” However, when Konkani writer Damodar Mauzo received the same award in Goa why the silence? This indifference is cause for anxiety because in our society writers and thinkers have always been respected. In ancient India writers commanded more respect than even the rulers, only writers can bring about much needed revolutions in a country! Therefore, it is the duty of political authorities to support literary institutions and the needs of writers, and especially their health care.
Minister Govind Gaude rued the fact that quality literature is hard to find and readership declining, but young people should read writer Pundalik Nayak’s literature which is like a mirror and offers inspiration to the young to gain knowledge and build up personality and mind in all aspects. Dr Bhushan Bhave (principal, Vidya Prabodhini, Porvorim) also praised the varied writing of the writer and Anant Agni compered the function.

THE governor of any state is supposed to be neutral and not have an axe to grind! A governor should stay away from the working of the government not takes jibes at the Opposition. We have seen how a governor takes his orders from the Centre and takes on the chief minister if he from the Opposition party, but these are rare instances.
Goa has been fortunate in having some excellent governors. The present 19th Governor PS Sreedharan Pillai is one amongst them. He is erudite, well-travelled, experienced, an author with more than 100 books to his credit. He has toured several villages in Goa, seen the condition they are in and read the people’s pulse, and made some pertinent observations:
(1) He is ready to bring the Raj Bhavan under the purview of the Right to Information Act. When there is nothing to hide, why not open the Raj Bhavan to people’s scrutiny?
(2) Respect the environment and comply with rules and regulations prior to re-start of mining activities.
(3) Do not delve as to what had happened during the Portuguese rule and rake up issues such as destruction of temples. Let the people continue to live in communal harmony as an example for other states.
(4) A fair and proper selection of candidates in government departments by following the Goa State Public Commission procedures and this should be free from political interferences.
(5) Increase the Happiness Index in Goa.
Recently, while attending a program, he assured people that within a year he would learn to speak Konkani. Given his determination, he will surely do so. Sir, on the lighter side, we hope that that you will be like former Governor Satya Pal Malik but will not get transferred because of accurate observations and even before you learn Konkani!
— Sridhar D’Iyer, Caranzalem

CM’S SAFFRON AVATAR!
PRAMOD Sawant seems to be working overtime to convince his masters and his vote bank that he is a dyed-in-the-wool saffron RSS sevak. Perhaps he realizes that he owes his position to a party with a track record of promoting those with a fascist mindset!
The Pramod Sawant we see nowadays has been brainwashed by his RSS training and has lost his ability to think for himself. It is like the blind leading the blind. He lets his Fuhrer tell him what to think and do.
The only thing cowards can do is use violence against the poor and weak and who can be intimidated. In the past, before India was united into the country, external aggression was common. Moghuls and Europeans controlled the country for centuries. The seeds of dissension were sowed long ago and especially courtesy of the British Divide and Rule policy. Unity was a hard-fought-for prize. It took brave men like Tilak, Gandhiji, Patel, and Nehru to unite us so that we could show a united face to our colonialists. If it was not for them, Britain would never have given India independence!
It fell on the shoulders of truly great human beings to lead the country into independence. People like Bhimrao Ambedkar, whose birthday we all celebrate April 14, he drafted our Constitution for a people to live in peace and harmony. It was due to his wisdom that India is a modern, secular, democratic country. It is because of this that the country made progress.
Alas, in the last decade the evil of fascism has been rising in India and we are swiftly slipping from developing and developed nation to sink even below countries like Bangladesh.
I am a Catholic in this country and my Constitution allows me freedom to profess and practice my faith.
Hinduism is an age-old way of life and practice and has evolved with time. My ancestors were probably Hindus until they with others converted to Christianity, after the conquest of Goa by Alfonso de Albuquerque. Many of the converts in Goa were Sudras and other tribes exploited by Marathas and Brahmins. Many Chardos also converted for better prospects in life.
However, the upper caste Brahmins were not oppressed and remained part of the elite class. I remember this while growing up in Goa. Soon the last of us who actually lived through those times may not be around to be witnesses. Then the government will have nobody to stop it from re-writing history!
I hope the honest researchers will keep the truth burning bright. An interesting article I read online was by Amita Kanekar on “Shaiva v/s Vaishnava in Portuguese Goa.” She gives a detailed account of positive dynamic relationship between upper class Hindus and the British. Even if my ancestors may have converted I have no regrets and prefer to remain a Catholic. More importantly I would like to be a good and ethical person because that is more reasonable and intelligent…and I find it disgusting that a chief minister can debase himself with “tu tu, main main” over religious beliefs of Catholics and Muslims. He is only bothered about Ghar Wapsi!
A person who does not respect secular values enshrined in our Constitution is a misfit to be the chief minister of any state or republic. Every religion has dark history and may be forgiven. We have to move forward today with our best foot forward. Hinduism too has had a dark past!
Dear Pramod Sawant, Hinduism has progressed and been modified, Sati has been abolished and several lakh widows saved…who would otherwise would have been sacrificed on their husband’s funeral fires. Child marriage is behind us. Exploitation of backward and low caste people who worked as scavengers has stopped. So your belief in the existence of forced conversions is a thing of the past. Don’t take away the free will of free people today! Please don’t be obsessed by raking up old ghosts by breaking down places of worship of other religions. If you do not respect the Constitution you cannot be a secular chief minister.
Let bygones be bygone and let us all live together in peace and harmony. Let us celebrate the goodness of Christmas, Easter, Ganesh, Diwali, Eid and any other religious festival with gaiety and solemnity. We need all religions to profess equality, brotherhood, sacrifice for the holistic development of our society at large.