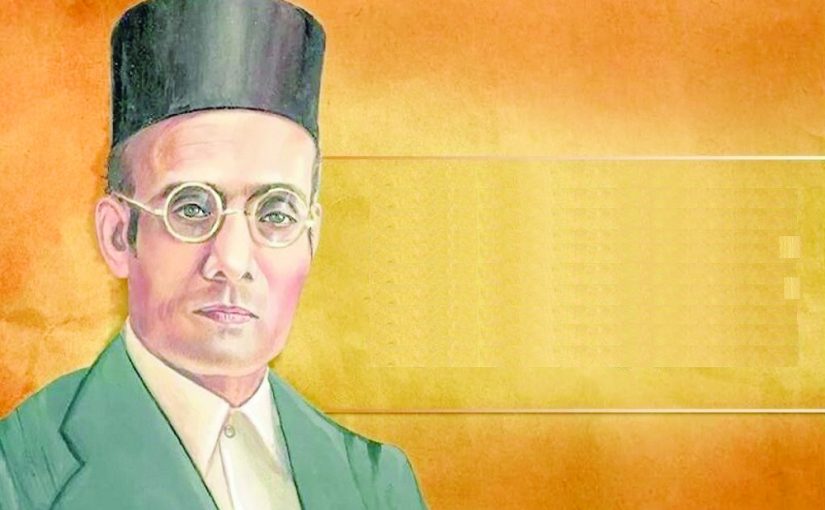 The nationwide promotion of Vinayak Damodar Savarkar as the symbol of Hindutva has gained steam in the run up to the 2024 Parliamentary elections. It is an attempt to brainwash voters into converting the democratic republic of India into a Hindutva nation which will marginalize the minorities, particularly the Muslims and Christians.

Chief Minister Pramod Sawant announced on Sunday, May 15, that the State government is planning to reprint the two books written by Vinayak Damodar Savarkar or Veer Savarkar, the supreme icol of the Hindutva movement, to counter western propaganda. The tool books are “1857 Ka Swatantra Samar” and “Gomantak.” Ironically, all the four major players in the post-independence destiny of Goa seem to have been educated in the UK, the country which ruled India for 190 years, which includes the period when the country was ruled by the British East India Company.

MOST PROMINENT
THE most prominent of them who played the key role in the liberation of India from British rule was Mahatma Mohandas Gandhi. Mohandas Karamchand Gandhi, not only did got his degree in law from the UK but practiced in South Africa before coming to India to launch the freedom struggle against British rule. His bitter rival, who wanted India to be partitioned and the architect of Pakistan, was Mohammad Ali Jinnah. Jinnah also got his law degree in the UK.
Interestingly, Jinnah married a Parsi women closely linked to Nusli Wadia, owner of the Wadia Group of Companies which includes Brittannia. In fact, Jinnah’s relatives have staked their claim to the posh bungalow that Jinnah used to stay in on Malabar Hill in Mumbai. It was because the British with their characteristic divide and rule game created discord between Gandhi and Jinnah that India was partitioned.
The first prime minister of India, Jawaharlal Nehru, a close associate of Mahatma Gandhi, was also educated in the UK. Nehru very strongly objected to the partition of India.
Even more so Mahatma Gandhi didn’t want partition to the extent that he suggested to Nehru that he should surrender the first prime ministership of India to Mohammad Ali Jinnah. It suited the interests of the British to leave behind a politically torn and partitioned India. Indeed, the British did not even ensure that the various states they divided the country into pledged their allegiance to the Republic of India.

PATEL’S ACHIEVEMENT
IT was Sardar Vallabhai Patel, the first home minister of India, who cajoled, bullied and persuaded all the states to become part of the newly independent nation of India. The exceptions were Hyderabad and Junagadh. The Nizam of Hyderabad even sent a representative to the Governor General of Goa for help against India. Finally, the Indian Army had to march into Hyderabad.
As far as Pakistan is concerned the basis for the division of the country was both the Muslim population and the proximity of the region to Pakistan. So much so, East Pakistan primarily consisted of East Bengal. The state of Bengal was split into East and West Bengal. Subsequently the eastern part of Pakistan became Bangladesh after India liberated the country from the domination of the Punjabi leaders of West Pakistan. The criteria was that both this areas had large Muslim populations besides being close to the proposed new Pakistan state. This itself was illogical as there was no link between east Pakistan and west Pakistan.

PATRIARCH OF INDIA
THE latest to gain prominence as the patriarch of India or religiously politicized Hindutva nation is Veer Savarkar, who too was educated in the UK. Unlike Nehru, Gandhi and Jinnah who was strongly pro-Muslim, Veer Savarkar was fanatically Hindu. Veer Savarkar wrote a book titled “Hindutva—Who is a Hindu?” It was Veer Savarkar who founded the Rashtriya Sevak Sangh (RSS). Veer Savarkar’s commitment to fascism was such that he was a staunch supporter of Germany’s Hitler. It was Veer Savarkar who started the Hindu Mahasabha.
Nathuram Godse, who assassinated Mahatma Gandhi, was a member of the Hindu Mahasabha. However, Veer Savarkar is being promoted by the BJP government under Narendra Modi and Amit Shah, as the new icon for the 2024 elections. Veer Savarkar is their alternative to both Mahatma Gandhi and the Indira Gandhi parivar. Though Mahatma Gandhi never created a parivar, the claim is that Veer Sawarkar fought British colonialism. The claim is that he was sentenced to 50 years in jail. The truth is that consequent on his repeated assurance that he would not involve himself in politics he was released after 27 years of imprisonment.

PATHOLOGICAL HATRED
THE only truth of the propaganda being spread about Savarkar is that he was as obstinate about uniting all the Hindus as Jinnah was about uniting the Muslims. Savarkar had a pathological hatred for Muslims just as Jinnah did not trust Hindus. It is in this sense that the BJP is projecting Veer Savarkar as the patron saint of a new Hindutva nation. He is to the BJP what Mahatma Gandhi and Nehru were to the Congress and Jinnah to the Muslims.
The only other truth in all the realms of misinformation and disinformation being spread about Veer Savarkar is that he literally committed suicide. Though he did not describe it as suicide but as a supreme sacrifice. Veer Savarkar went on an indefinite hunger strike from February 1, 1966 and his end came on February 26. He literally starved himself to death. None of his thousands of ardently Hindu followers made any attempt to save his life. May be he thought that this would contribute to his stature as the Bishmahpita of the Hindutva nation.
Of the four UK educated leaders, namely Mahatma Gandhi, Jawaharlal Nehru Mohammad Ali Jinnah and Veer Savarkar, politically Savarkar was least successful during his life time. Only a small lunatic group of hardcore Hindus supported him. The kind of Hindus who made up the Hindu Mahasabha and the RSS. It was also Veer Savarkar who instigated or inspired Nathuram Godse to assassinate Mahatma Gandhi. Sawarkar considered Mahatma Gandhi a fake Hindu due to his sympathies with the Muslims and blamed Gandhi for not preventing Partition.

FIGHT IT
WE need to fight the building of the Veer Savarkar cult in the run up to the 2024 parliamentary elections. We have to stop the distortion of history. Veer Sawarkar was a petty minded fascist. Ironically, though he claimed to be the representative of the Hindu people, he described himself as an atheist.
Of all the freedom fighters Veer Savarkar was the only one who pleaded with the colonial regime to release him from cellular jail in the Andaman & Nicobar Islands. In this sense Veer Savarkar was a coward who colluded with the British. India is a secular democratic republic by its Constitution. If we let the Veer Savarkar propaganda succeed India will become another Pakistan. The minorities in India will be totally marginalized.
The glorification of Veer Savarkar is a distortion of history to create other Adolf Hitlers. Veer Savarkar will contribute towards the hardening of Prime Minister Narendra Modi into another monstrous leader like Donald Trump of the USA and Vladimir Putin of Russia.