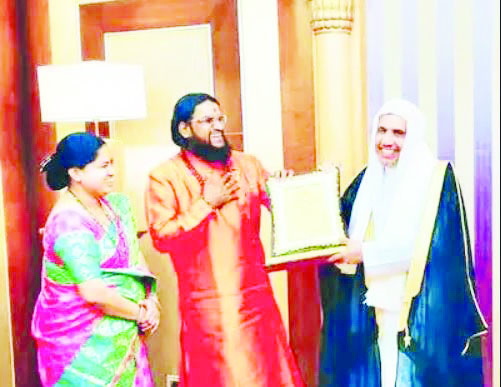 COMMUNAL HARMONY: THE fortunes of the Kundaim-based Swami Brahmeshanand, who is the patron of the Bhandari Samaj, has gone international after the BJP returned to power. There are several Bhandari Samaj ministers and MLAs in the Pramod Sawant government. The Kundaim Swami is currently on a tour of the Gulf countries including Saudi Arabia. Swami Brahmeshanand was honoured with the Global Peace & Harmony Award at Al Issa in Saudi Arabia on behalf of the Hindu community. Swami Brahmeshanand is the only Hindu godman who has reached out to the Muslim community and has even been invited to visit Saudi Arabia. His secular credentials and positive attitude deserves to be emulated by other godmen!

GOA’S Casino business continues to flourish unregulated thanks to political patronage! For so many years the proposed rules to regulate casino operations have conveniently and in connivance with the governmental authorities, not seen the light of day, while files shuttle down corridors of power.
The government’s intentions are clear. Casinos don’t make cashless transfers and allow black money to circulate and get laundered. A gaming commissioner was appointed three years ago but he been idling around with no rules in place. So the casino mafia of Goa enjoys abundant political clout and largesse and their customers may even park their cars merrily down a very busy stretch of the Campal promenade.
The Dayanand Bandodkar Marg thoroughfare is No parking designated but traffic and transport officials look the other way — as traffic rules are cheerfully breached. Tourism Minister Rohan Khaunte and GIDC Chairperson Reginaldo Lourenco, who over the years have vehemently opposed the social menace of Casinos — are now enslaved in the BJP camp! So they remain tight-lipped on vital issues affecting Goans, they seem to have lost their independence and freedom to speak out!
— Aires Rodrigues, Ribandar

ASSESS POTHOLES NOW!
THE new bridge Atal Setu is riddled with potholes. So now the government has requisitioned IIT Madras to find out the reasons! Strange. It is like hiring the IIT to study the high incidence of fire in EV scooters. Is it not the responsibility of the scooter manufacturers to do this? Who will pay IIT Madras?
The government of Goa is doing the job of businessmen on public money. L&T must be asked to do a root cause analysis for frequent potholes and rectify the same. If the RCA is not proper, then only can the government hire IIT and debit the costs to L&T. If L&T fails, then there is the performance bank guarantee (PBG) which is normally for 10 to 15 years for such projects which can be encashed.
Defect liability is for workmanship and must not be confused with warranty. Blacklist L&T if they fail to solve the problem, why is Nitin Gadkari not informed? Tell him that his much-maligned activists have raised the pothole issue and not the BJP government. See the way the government is now doing the jobs of the mine owners in de-watering the mining pits!
The Mining Act clearly states that mining pits dewatering, providing safe drinking water and transporting the children of the mine labour to schools, is the responsibility of mining lease holders. Slowly, the taxpayers are bearing more and more of the brunt of mining ravages. We know nothing comes free and there are big bucks for the killing!
— R Fernandes, Margao

LOCAL DANCE BAR SHUT IN CALANGUTE
A few locals from Calangute were seen protesting outside a prominent dance bar and demanding for a thorough investigation/probe into a recent incident which took place in the vicinity of the same dance bar in the village.
Well, it’s a known hard fact that this particular dance bar (which was incidentally inaugurated by our former tourism minister, Babu Azgaonkar and which is run by an outsider) and many others are currently operating illegally using restaurant licences & creating nuisance in the village of Calangute. And the reason why one can see more and more dance bars coming up in Calangute today then that’s only because they are being fully backed by politicians, panch members and even some top officers from the Goa police Department to enjoy their own regular ‘haftas’ or bribes in Goa.
I think that the Calangutkars (leaving their petty politics/ personal rivalries behind) should unitedly come together this time and force the present government to immediately shut all such illegal dance bars to really promote quality tourism in their village (including in other parts of Goa) to re-start singing Lorna’s most famous old track in a very big way in the whole of Goa in the near future….
—Jerry Fernandes, Saligao