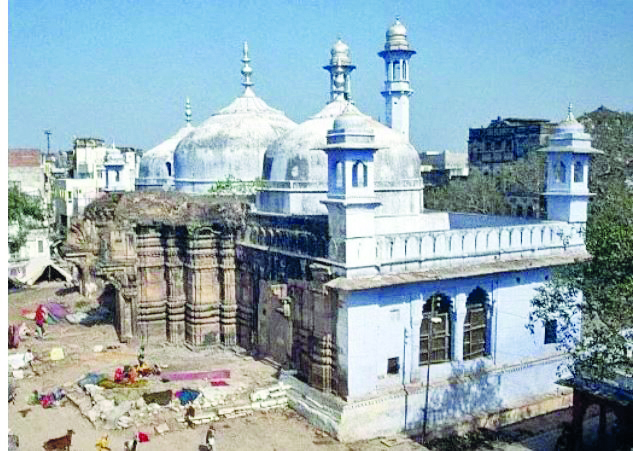 DANGEROUS: The survey ordered by a Varanasi Court of the Gyanvapi mosque in the presumption that it was built on the ruins of a Hindu temple is a dangerous sign. The Varanasi Court should have adopted the stand taken by the High Court which declared the contents of the number of closed rooms in the historical Taj Mahal in Agra – is not a matter for the courts to decide.

A survey ordered by a Varanasi Court on the premises of the Gyanvapi Mosque, in close proximity to the Kashi-Vishwanath temple, has raised fears of replay of the Babri Masjid demolition in Varanasi…

One has to bear in mind that the Ayodhya verdict was unanimous, therefore, the opinion cited in the judgement regarding the Places of Worship Act was also unanimous. This essentially means that Justice Chandrachud believes that the Places of Worship Act is sacrosanct and is essential to maintain the secular nature of the Constitution of India.
he Supreme Court on Friday directed the listing of the petition filed against the survey ordered by a Varanasi court in Gyanvapi Mosque before a bench presided over by Justice DY Chandrachud. The petition against the survey of the disputed Gyanvapi Mosque structure has been filed by Anjuman Intezamia Masajid Committee, represented by Senior Advocate Huzefa Ahmadi, Senior Advocate Fuzail Ahmad Ayyubi, Advocate Nizamuddin Pasha, Advocate Ibad Mushtaq and Advocate Kanishka Prasad.
The main contention of the petition is rather simple – the Supreme Court should stop the survey of the disputed Gyanvapi Mosque structure because it violates the Places of Worship Act 1991. The petitioners, before the CJI, had said, “Survey has been directed in relation to Varanasi property. This is covered by Places of Worship Act. Now the Court has ordered Commissioner to conduct a survey”. CJI first remarked with “let me see” according to reports. Later, he said that he does not know what the case is and has not gone through the papers. It was after this that the CJI had ordered the listing of the special leave petition before a bench presided by Justice Chandrachud.
It is important to note that while we refer to the Gyanvapi Mosque as a “disputed structure”, the existence of a Hindu temple is visible to the naked eye. Besides that, several eyewitnesses have confirmed the existence of Hindu symbols on the premises of the disputed structure. The former Mahant of the Kashi-Vishwanath temple has said, “There are Bhagwan Vishnu, Mata Lakshmi and even the wheel of Buddhists etc., engraved on the Pillars. When I saw it back then, there used to be a coal shop at that time. The woman who ran the shop used to make food and then sell it to the customers.”
He further added, “The government tried to keep this temple safe in any way possible, so they got barricading done all around this temple. They [Muslims] say that the masjid is theirs. But those who offer namaz in the masjid, have forcibly occupied the premises. They come in large numbers to offer prayers and try to show the power of their community. I am sure that there is a temple. They are not allowing us to go to the basement because of their anarchy and polluted thinking.”
Another eyewitness, Ram Das Khatri, said, “It was a temple before. There is no doubt about it. The temple has been forcefully snatched from us (Hindus). This temple is of Hindus. You can clearly see that it is Mata Gauri, whom we call Shringar Gauri as well.”
Therefore, it is safe to say that there is no dispute regarding the fact that a Hindu temple, visible to the naked eye, existed where the disputed Gyanvapi Mosque structure stands today, destroyed by Islamic invaders.
In the light of this, the petition by Anjuman Intezamia Masajid Committee becomes incredibly important, since if the survey of the disputed structure is halted, the reclamation of the Kashi temple comes into question.
Given that this petition is listed before Justice DY Chandrachud, one could perhaps make a calculated guess as to how the case would proceed. During the Ram Janmabhoomi verdict, the 5 Judge bench had included a long-winded unanimous opinion on the Places of Worship Act, 1991. The 5 Judges who unanimously passed the verdict included Justice DY Chandrachud.
The decision to address the Places of Worship Act, 1991 in the Ram Janmabhoomi verdict was widely criticised by lawyers. Advocate J Sai Deepak had penned an article at the time in the New Indian Express detailing how the RJB verdict was beyond the scope of the Act and therefore, there was no need to discuss the act at all.

Sai Deepak had written:
The appeals before the Supreme Court arose from the 2010 judgment of a three-Judge Bench of the Allahabad High Court delivered in a batch of title suits over the then-disputed land in Ayodhya. The PoW Act, on the other hand, is a statute designed to “prohibit conversion of any place of worship and to provide for the maintenance of the religious character of any place of worship as it existed on the 15th day of August 1947…”. Pertinently, Section 5 of the said Act expressly exempts the legal proceedings in relation to Shri Ramjanmabhoomi from the application of the Act. This is recognised by the Supreme Court itself in Paragraph 80 of the Ayodhya judgment. In light of this, there was no need for the court to discuss the Act in the context of Shri Ramjanmabhoomi. And yet, the court deemed it fit to discuss the Act in over 10 pages, with the central thrust of its deliberation being “the Constitution’s commitment to secularism”.
In his article, Sai Deepak had argued that since the PoW Act was irrelevant to the Ram Janmabhoomi case, the deliberation on the act in the RJB verdict should not be considered legally binding.
What the Judges had said regarding the Places of Worship Act, 1991, in the Ram Janmabhoomi verdict
The central focus of the Places of Worship Act, 1991 was to ensure that Temples, Mosques, Churches etc maintain their character as it was on the 15th of August 1947. So, if a Temple was destroyed by the Mughals and a Mosque was built in its place, the Places of Worship Act essentially said that the Mosque should continue to maintain its character and can’t be turned back into a Temple.

The Ayodhya judgement unanimously said that the Act had two purposes: