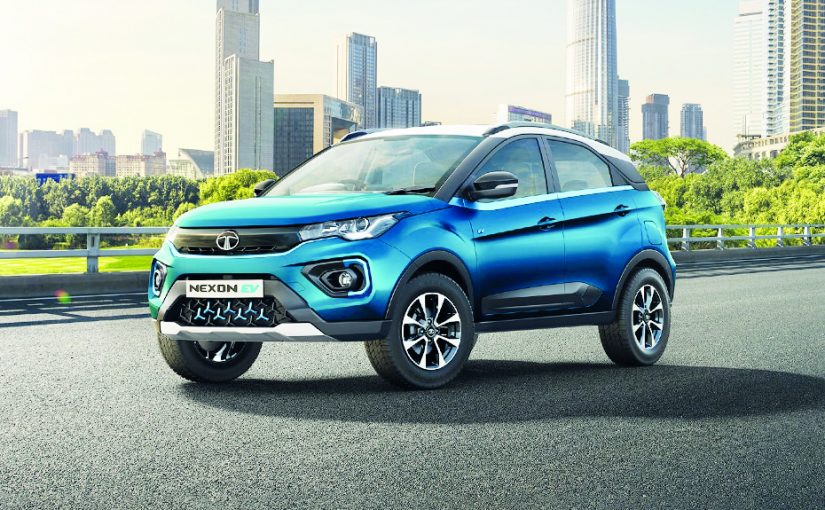 ECONOMY: With power prices also going up it is important that the e-car or scooter should give you greater mileage per charge.

The new Tata E-car has over taken over even Mahindra’s rival cars in terms of economy – as it can give you a mileage of 400km per charge.

India’s third-largest carmaker commands 96 percent of the country’s electric car market. With its first-mover advantage, it is only likely to benefit once the momentum gathers pace and investments pour in It’s now safe to assume that Tata Motors holds a distinct advantage in India’s electric vehicle (EV) transformation journey.
Much of that, of course, is thanks to the Nexon EV launched in 2020, which has gone on to become a runaway success with sales of nearly 20,000 units so far. The Nexon EV is based on the Nexon SUV, once built as a bridge product to keep the automakers’ coffers flowing when it transitioned its entire vehicle platforms on two new architectures as part of the automaker’s restructuring after a decade of turmoil.
Today, Tata Motors is India’s third-largest carmaker, with a market share of nearly 14 percent, and is closely on the tail of India’s second-largest carmaker, Hyundai Motors. More importantly, the success of the EV has meant that the company commands a staggering 96 percent of India’s electric car market.
Of course, EVs are in their infancy in India, and lag markets like China and the US, as domestic sales fare pale in comparison to what carmakers sell on the internal combustion engine (ICE) platforms. The EV sector penetration in the country currently stands at around one percent and that’s particularly why Tata, with its first-mover advantage, is only likely to benefit once the transformation gathers pace, pushed by private and public investments into the sector.
That’s precisely why, on May 11, a week after the company showcased its third-generation electric concept vehicle, Avinya, which could have a range in excess of 500 km and is envisioned as a global product that can rival even Tesla, Tata decided to bring in its latest offering, the long-range Nexon EV, that the automaker reckons will allay range fears.
The Nexon EV Max boasts an ARAI range of 437 km, almost 120 km more than the electric Nexon currently on sale. The figure is under optimal conditions and that would mean that the real-world number could be different, most likely be about 30 percent lower. The new upgraded EV has a larger 40.5 kWh lithium-ion battery pack, offering a 33 percent higher battery capacity. The automaker has also offered a faster charging time of 0–80 percent in 56 minutes from a 50 kW DC fast charger.
The Nexon EV Max is priced at Rs 17,74,000 and goes up to Rs 19,24,000, while the Nexon EV is priced between Rs 14,50,000 and Rs 17,15,000. “This vehicle has the potential to be a game changer,” says Puneet Gupta, director for automotive forecasting at market research firm S&P Global Mobility. “This will be a trendsetter for all the companies who are going to bring in their electric vehicles, and from a customer perspective, that means the Nexon could now be the first choice for buyers as it addresses the issue of range anxiety. For long, the Nexon EV was a second vehicle for buyers, especially in cities.”
While the new variant is more expensive, it also undercuts its competitors, particularly MG Motors and Hyundai Motors, whose electric offerings remain significantly more expensive, a hindrance to the wider adoption of EVs. For instance, the top variant of the Hyundai Kona costs Rs24 lakh while the MG ZS costs nearly Rs26 lakh.
“We did a survey, and it came out that the minimum range that a customer is looking for to avoid range anxiety is 200 km,” Shailesh Chandra, president of Tata Motors passenger vehicles, told Forbes India in November 2021. “That means a certified range has to go above 300 km or so. At the same time, the customer is not willing to give more than 25 percent premium over ICE vehicles.”
That focus on pricing, coupled with a fixation on the product quality, is precisely how the Tatas seem to have cracked the Indian electric market. Last year, the EV space collectively saw a 257 percent year-on-year growth with Tata Motors registering the highest sales, with over 3,324 vehicles, posting a staggering 331 percent growth in the passenger EV segment. “The new long-range variant is an absolute winner and should allay the range anxiety concerns if any for the fence-sitters,” Harshvardhan Sharma, head of auto retail practice at Nomura Research Institute, says. “This will surely fortify Tata Motors’ apex position in the Indian EV market.”
Already, the company has set up a subsidiary, Tata Passenger Electric Mobility Limited, for its EV play and turned that into India’s most valuable EV company, after raising $1 billion from private equity major TPG Rise Climate. The deal values the subsidiary at over $9 billion and the first tranche of capital infusion had taken place in March. Tata Motors will also invest $2 billion into the subsidiary over the next five years.
“Our goal is to go global eventually and we are benchmarking to be the best whether it is in terms of software, electric and electronic architecture or the intuitive experience,” N Chandrasekaran, chairman of Tata Motors, had said on April 29 in Mumbai, at the launch of the company’s third-generation EV. “We have really high aspirations. EVs open up a whole new set of possibilities for the company.”

Going big
India is already planning to push for a sales penetration of 30 percent for EVs in the private car market, with an even greater ambition of 70 percent for commercial vehicles and 80 percent for two- and three-wheelers by 2030. Tata Motors has already laid out plans to launch as many as 10 EVs by 2026. In April, the company announced plans to launch the Tata Curvv, an electric SUV that will also have an ICE counterpart.
“This is a big opportunity to lead the charge in this space [EV] and go about creating 10 products, and also create the ecosystem around it so that the aspiration of driving growth in electrification does not suffer because of lack of ecosystem,” Chandra had told Forbes India earlier.
Already, to do that, the automaker has turned to the wider group to drive synergies. The group has built Tata UniEVerse, an ecosystem where several Tata companies have come together to provide EV solutions to consumers. The company has partnered with Tata Power to provide end-to-end charging solutions at home, the workplace, and public charging facilities. Under this partnership, the company has installed fast-charging stations in metros, including Mumbai, Delhi, Pune, Bengaluru and Hyderabad, in addition to chargers on highways. So far, Tata Power has set up 1,000 EV charging stations across India in some 180 cities.
“What they are building with the entire ecosystem is unparalleled,” adds Gupta. “They have a significant first-mover advantage and even the likes of Hyundai will not be able to build a grand ecosystem such as Tatas. It is going to be a mega company in the EV space.” The company has also tied up with Tata Chemicals in its attempt to build a component supplier ecosystem and manufacture lithium-ion battery cells, in addition to looking at active chemical manufacturing and battery recycling.
“It’s a combination of right products, right time, and the right place,” Sharma of Nomura says. “Tata Motors made a strong bet on EVs and followed it through with strong conglomerate synergies across charging batteries and form factor itself. This is an inimitable strategy bearing payoffs for Tata Motors.”
India’s carmakers are firming up plans to aggressively pursue the electric car market after dilly-dallying for years. For instance, after years of staying away from the EV space, Maruti Suzuki has now decided to put its money behind the sector and plans to launch a new EV by 2025, a year when numerous electric launches are expected. Under the new plan, Suzuki Motor Corporation’s wholly-owned company, Suzuki Motor Gujarat Pvt Ltd (SMG), will invest Rs7,300 crore in the construction of a battery plant near SMG’s automobile manufacturing unit by 2026. SMG will invest another Rs3,100 crore for ramping up production capacity for EVs by 2025.
Similarly, Mahindra had, in May 2021, approved the merger of the EV subsidiary Mahindra Electric Mobility Ltd (MEML) with the company to consolidate operations, development, sourcing and manufacturing. It also set aside Rs3,000 crore for its EV plans, six of which will be launched by 2026
India’s EV market is expected to have a compound annual growth rate of 90 percent in this decade to touch $150 billion by 2030, according to a report by consulting firm RBSA Advisors. Yet, despite all the narrative around EVs, there haven’t been substantial gains. Last year, India sold some 325,000 units of EVs, of which 149,000 were two-wheelers and 157,000 three-wheelers. In contrast, over 18 million vehicles that run on ICE were sold in FY20, of which 15 million were two-wheelers. China sold some 3.3 million EVs in 2021, according to market research firm ZoZo Go, in a year marked by a pandemic.
“Range anxiety, charging infrastructure, battery life, resale value, electric supply, build quality, price point, demand incentives, and safety are some of the top issues which still hold back EV adoption somewhat,” Sharma of Nomura says. “It may still take at least 5-7 years for a higher uptake depending on battery prices and availability of other green alternatives such as CNG, Hydrogen (FCEV), Flex fuels, and the like.” Tata, however, could also benefit significantly from word of mouth as more customers embrace EVs.
“Nexon volumes have gone up from 100 a month to more than 3,000 a month. As more and more people see the vehicle on the road and hear about it, it helps in driving sales,” says Vivek Srivatsa, head of marketing, sales, and service strategy at Tata Motors. “As market leaders, we can’t wait for the market for sales to go up naturally and that’s why we are pushing the envelope.”
Yet, despite rising fuel prices, EV adoption had faced setbacks in recent times, after numerous cases of EVs bursting into flames across the country. Among others, two-wheelers manufactured by the likes of Ola have caught fire, and people have also succumbed to injuries because of such incidents. That forced the government to bring about stronger intervention into the segment.
“We have constituted an expert committee to inquire into these incidents and make recommendations on remedial steps,” Transport Minister Nitin Gadkari had tweeted. “Based on the reports, we will issue necessary orders on the defaulting companies. We will soon issue quality-centric guidelines for electric vehicles. If any company is found negligent in their processes, a heavy penalty will be imposed, and a recall of all defective vehicles will also be ordered.”
For Tata Motors, that has meant an opportunity to lead the transformation towards wider electric adoption. “Overall regulation and self-monitoring of quality are very important,” Srivatsa tells Forbes India. “You can’t just import and put a product without proper validation for Indian conditions. A lot of charging technology is based on software and if you don’t develop software to optimally charge the battery, there is always a danger. Maybe it’s now time for four-wheelers to drive the transformation with its high-quality software integration and reliable products.”