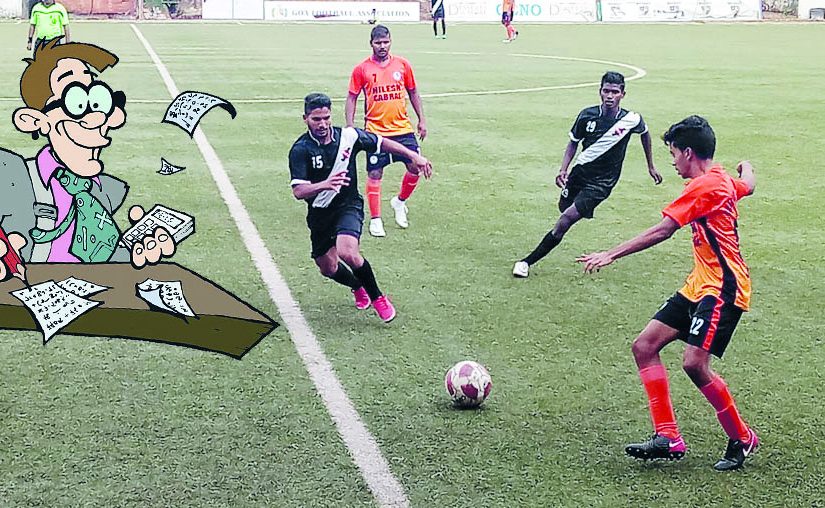 FIXED: Ethical companies like Sportsradar are hired to analyse betting patterns that seem suspicious of match fixing. It’s the bookies that fix and manipulate events of a game by paying a huge sum of money to the teams with greater odds of winning to drop a game. This results in the majority of people placing bets on the team with favourable odds, not knowing that the events of the game were fixed.

The commercialisation of sports and sporting events have drawn endorsements from various betting organisations. Companies like Dream 11, My Circle 11, have got every Indian hooked to pre-game permutations and combinations. While betting has become legal to a certain extent, it’s the insider information that bookies look for to fix the overall out come or parts of a game. The latest controversy is the match fixing scandal in the Goa Professional League.

THE demons of match fixing have for long been associated with Indian sport. The most talked about incident that brought shame and turmoil among the cricket worshippers in India was on April 7 2000. The Delhi Police claimed possession of a telephonic conversation recording between South African skipper Hansie Cronje and bookie Sanjay Chawla which led to Cronje being charged for match-fixing. Three other teammates Herschelle Gibbs, Nicky Boje and Peter Strydom were also implicated in the case.
In his statement Cronje revealed that the then Indian captain Mohammad Azharuddin had introduced him to a bookie who offered him money to throw the 1996 test match during South Africa’s tour of India. After initially rubbishing reports, in the CBI investigation Azhar revealed that he had fixed three ODI’s the first against South Africa at Rajkot in 1996, followed by the Pepsi Cup matches in Sri Lanka in 1997 and Pakistan in 1999. However, he again denied any involvement in an interview.

GOAN BETTING TABLE
Match-fixing and has been a common fixture at the national level with countless allegations of the IPL being the monopoly board for fixers. The demon has slowly crept into local and professional sports in Goa. Goan football which was once the playground, of the best football in India, has now hit its lowest of lows with the dark shadows of match fixing hovering over its local professional club league. The Goa Pro league that once showcased packed stadiums with large crowds through out the 1980’s and 90’s displaying a highly technical attractive brand of football has seen a steady decline. Giant clubs have dropped down in the Indian football pecking order over last few years. The states professional football league is now facing allegations of match fixing.
For the third year now Goan football has been rocked by match fixing allegations. Last month on April 28th 6 matches in 10 days were identified for suspicious match fixing. According to a report in the Times of India, London based entity “Sportsradar a company that monitors betting odds and patterns worldwide through a Fraud Detection System informed the Asian Football Confederation (AFC) of the suspicious activities in a few Goa Pro League matches. The report published by Sportsradar said that there was clear overwhelming betting evidence that the result of the match was influenced with a certain view of gaining betting profits. Sportsradar officially monitors several Indian sporting competitions already: the Indian Premier League, Indian Super League, Tamil Nadu Premier League, Pro Kabaddi League, and Pro Volleyball League.

LESSER TARGETS
With increased scrutiny at the top of the sporting league pyramid it’s the lower-level competitions that are being targeted for manipulation. 50% of suspicious football matches in domestic leagues came from the third tier or lower in 2021 globally. The matches red flagged in the Goa Professional League were Guardian Angel SC vs Dempo Sports Club 0-4, Sesa FA vs Velsao SC 5-1, YC Manora vs Velsao SC 0-3, Velsao SC vs Calangute Association 1-5, YC Manora vs Sporting Clube de Goa 0-5, YC Manora vs Salgaoncar SC 1-4.
Despite cricket being the number one sport in India, both in a popularity and worldwide betting interest, no suspicious matches were detected in Indian cricket in 2021. Yet suspicious cricket matches have previously been detected in India, and there has been ongoing suspicious betting activity witnessed across global cricket in recent years. Nine suspicious matches detected in 2021, and four detected so far this year. The emergence of semi-professional regional t-20 competitions like the Canada Premier League and the Hong Kong Premier league are vulnerable prey to the bookies. Besides these semi-professional tournaments the veteran leagues like the Abu Dhabi t-10 tournament are other avenues due to the lack of scrutiny and professional policing.
These smaller leagues and competitions often lack the financial strength and resources to implement key integrity protections, making them more susceptible to illicit approaches. This is a trend which is expected to continue as more leagues re-emerge from Covid-19 cancellations and postponements, providing more vulnerable targets for match-fixers. The unregulated Indian betting market is at the forefront of cricket betting activity, and increased vigilance is required as betting interest continues to increase, even for lower-level competitions, where players can be considered more vulnerable targets due to the less substantial playing salaries. It can be said with confidence that sport — and therefore sports betting — in India is only going to expand due to Indian sport’s continued development from a commercial perspective, alongside the number of new leagues and tournaments that are establishing themselves.
All India Football Federation (AIFF) secretary, Kushal Das responded to the match-fixing saga making waves in Goan football. He promised to assist the State affiliation to curb the ‘match-fixing illness. Goa Football Association (GFA) president, and I-league club owner Churchill Alemao not too long ago accepted that match-fixing existed on the subject of football within the state, an affirmation which despatched shock waves throughout the sporting community. Many matches in the league have thrown up suspicious results said GFA president. My own team has suffered at the hands of this virulent match manipulation. I’ve taken action and our efforts at GFA are to eradicate this menace. The GFA have requested the CBI to carry out a thorough investigation of the matter. It remains to be seen if the investigation is white washed in an attempt to shield the local industrial and political powerhouses like Churchill Alemao and Srinivas Dempo.