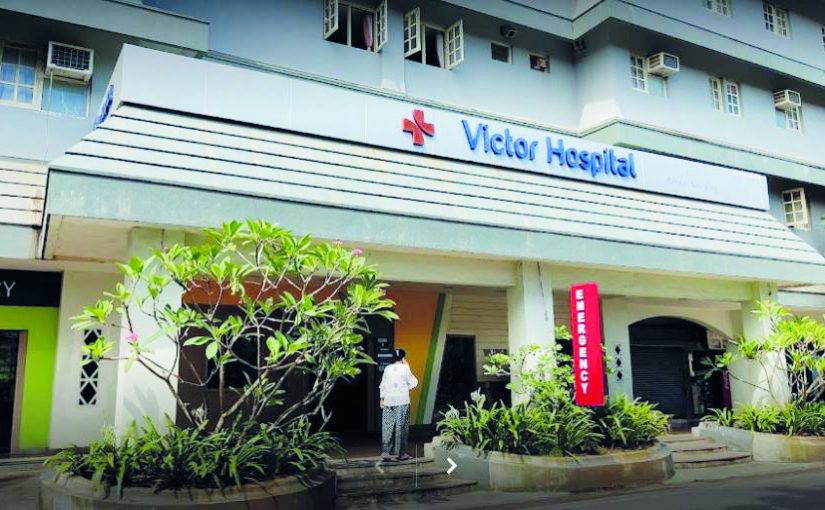 Well-appointed cafeteria at victor hospital: Savoury snacks for visitors as also a wide range of beverages. Elsewhere take a peep into a doctor’s lunch served in a stainless steel tiffin, a very good idea from home!
Thank you Dr Alvares for permitting me to click this picture!

THE best thing to do when something bugs you is to write about it. Even 24 hours spent in a hospital offers me food for thought. This time around it was trailing the hubby to the Victor Apollo Hospital at Margao for a colonoscopy which he was advised to do, before any surgery could be decided. Of course, we go to hospitals depending on the infinite patience of doctors like in this case, whom I consider the finest gastroenterologist in Goa (namely Dr Jose Filipe Alvares).
The good doctor said he hardly ever comes to Panaji anymore so please come to Victor Apollo in Margao. We went and is the usual case as the patient’s attendant I end up eating the patient’s Sodexo meal but this time the patient had to be in fasting mode for 24 hours, no food for him. Doctors want the digestive tract to be as squeaky clean as possible before putting in any sensitive colonoscopy instruments to take pictures of your insides to come to a conclusion what ails you.
It was my first time down south Goa at the Victor Apollo and I get the impression that it’s surely got the best gastroenterology and diabetes departments in Goa in private healthcare and their single rooms are not bad either, very specious but without windows to look out at the flowering copperpods outside overlooking the main road. The hospital was chok-a-blok but by late evening a another patient was discharged and fortunately fell vacant, but it was not overlooking anything worth looking at. They also have sharing wards.

It was just about a 24 hours stay and the patient wasn’t getting any food before his procedure but seeing my favourite Sodexo folk bustling around I asked for my patient’s attendant meal – instead of going down around about on the streets for something to eat. The cafeteria at the hospital is a soothing corner with all kinds of posters put up by the Sodexo folk about what kind of food one should eat to be in the pink of health. Never mind that that most of the stuff in the posters was not available in the cafeteria! But some of it was available and the Sodexo thali meals for a patient’s breakfast, lunch and dinner are very health conscious and dietician Sonali Naik came around to say hello to the patient for after the colonoscopy he was hungry and wanted something to eat.

SODEXO MEALS
WHEN I asked her why attendant’s meal was not as health-conscious as patient’s meal, she smiled and said she would provide me with a patient’s meal if I so desired, “It’s just that most attendants don’t like what we give the patients because for the patient it is low in oil, salt, spices…they prefer tastier food!” Of course anyone may go to the cafeteria attached for more flavorful food and here one could even help oneself to samosa, batatwada and curiously — bread pakoda! Mercifully the Sodexo kitchen here prepares all the food and nobody may bring food from outside to have a party!
Well, it was just a one-time patient’s meal I enjoyed but I must say I loved it so much here am I wishing these runaway successful Sodexo folk who have expanded into other areas of hospital and hospitality housekeeping, would also set up health-conscious meals for senior citizens to be delivered in their own homes. In Panjim I would welcome such a tiffin service. Hey, Adam d’Costa, speak to your bosses about this, he is the Sodexo unit manager at Victor Apollo hospital and a most helpful, genial person.
I found the services at the Victor Apollo very friendly and not snooty as is the case with very many snooty corporate hospitals beginning with the reception, but the pharmacy can surely afford to stock a larger range needs in hospitals like wet-one tissues; but funny this, the girl here said they had large bath-size wet tissue towels and I was quite fascinated by this product!
Dr Alvares is one very busy doctor and there must have been easily 40 patients waiting for him for that day. After everything was over we said goodbye to him near tea-time – that’s when he got a break for his lunch. So getting a glimpse of what a doctor eats I took a click, and good sport that he is, he let me and didn’t even say don’t use anywhere (so I am using it here). I learned Viva Hotel adjacent to the hospital is a boutique hotel and actually makes for a very convenient stay for relatives accompanying patients for prolonged treatment at the Victor Apollo (I think half the premises of the old hospital has converted into a hotel and it complements the hospital well.
THIS is to say the hubby’s old friend, the late businessman Victor Albuquerque has gone with the wind, but it is a very good idea to make the Victor Apollo into a memorial hospital in his name. I remember Victor very well for the honourable, generous person he always was, and later on got to know him better when he started the Vegetarian Society of Goa and turned vegetarian himself along with wife Sylvia. Set up the Divar Island Ayurveda retreat which served the best vegetarian buffet prepared along Ayurvedic sattvic principles. Son Varun Albuquerque is now running his father’s hospital.
At reception I was happy to pick up all these leaflets telling me about the various highly committed doctors on the hospital roll-call. A very useful bit of take-way information. Wish the hospital was a little closer to Panaji for I’ve taken a shine to it, it doesn’t intimidate like some hospitals in the private sector do! I guess I didn’t have much time to do a bit of loafing around Margao which I wanted to do. It was not to be.
The next time I go down on my two-wheeler I certainly will, the highways have made movement infinitely smoother and faster though there are misleading patches here and there, the problem with highways and bypasses is that once you miss a turn it’s like going on forever in frustration. Highway signs definitely need to be better defined.

NIGHTMARE NIGHT!
BACK home I ventured to express my opinion but nobody is listening of course! Hey, if a patient fasts for three days he doesn’t have to go through this trauma of colonoscopy pre-trauma via artificially induced “Coloprep Bowel Preparation Kit!” This is actually a laxative of “Sodium sulphate, potassium sulphate and magnesium sulphate oral bowel preparation solution” which the patients has to drink to clean out the digestive tract in 24 hours during which the patient fasts. It’s basically a night-time trauma in staying awake going to the loo!
Never mind that the solution is “delicious orange flavour” — it can be hellish to have continuous loose bowel movement. Nobody has even invented lightweight easily disposal tissue diapers for such occasions…the result you can imagine. Adult diapers are such a waste of money in such circumstances because the constant staining is irritating as it is mild but frequent enough to require a fresh changes of bedsheets and towels.
What exactly is a coloprep? A coloprep is indicated for bowel cleansing prior to colonoscopy, barium enema X-ray examination and in preparation for colorectal surgery. The kit costs about Rs400 or so. I wonder if one may also use it at home to give oneself an oral enema or would that be disastrous? Nobody is asking me but if you’re asking me this procedure is a faster and more traumatic version of Ayurveda’s enema in its panchkarma detox treatment!

By the time one is through panchkarma treatment of five/seven/21 or more days at a proper Ayurveda facility, one’s digestive system turns squeaky clean too and after some rest it is introduced to food anew gradually….I do believe that where there is hope in Ayurveda to develop tone and muscle, there is none in Allopathy. Just observing something for argument’s sake okay! There’s many a slip between the theory and practice of anything and it all depends and differs from patient to patient.