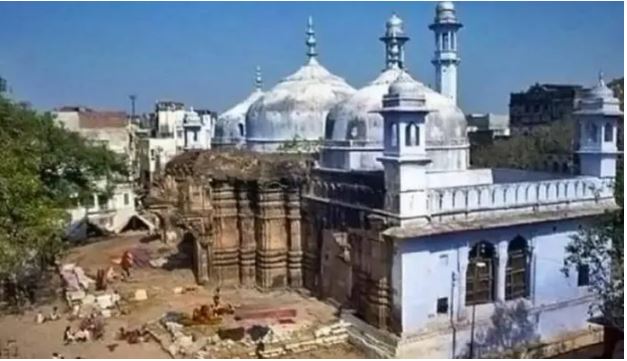 HARRASMENT: The Delhi police is trying to harass journalist Saba Naqvi for making a joke of Hindu fanatics finding a shivling at the Gyanvapi mosque premises .

The Press Club of India has claimed that the derogatory remarks made by senior journalist Saba Naqvi were not blasphemous and demanded that the FIR against her should be withdrawn.

Saba Naqvi had posted a tweet comparing the Bhabha Atomic Research Centre with a Shivling, which she had deleted following outrage from Hindus
On 10th June 2022, the Press Club of India claimed derogatory remarks by Saba Naqvi in an attempt to mock Shivling that was found during the videography of the Gyanvapi complex of Varanasi cannot be called blasphemous. The Press Club of India has also demanded to withdraw the FIR registered against Saba Naqvi by the Delhi police.
A tweet from the official Twitter handle of the Press Club of India said, “The Press Club of India vehemently condemns the lopsided and highhanded manner of Delhi Police in lodging FIR against Saba Naqvi, senior journalist, and columnist.”
In a subsequent tweet, it said, “The whimsical way of Delhi Police in reaching out to her posts reflects Delhi Police’s more-than-eagerness to make her posts blasphemous thereby registering her as accused of a crime which she has not committed at all. The Press Club demands immediate withdrawal of FIR against her and all on-going inquiries against her be stopped forthwith.”
It is notable that Delhi Police, on Wednesday 8th June 2022, filed an FIR against ex-BJP spokesperson Nupur Sharma, former BJP leader Naveen Kumar Jindal, ‘journalist’ Saba Naqvi, and others over allegations of promoting false information with an intention to create unrest in cyberspace. Other than the mentioned above, some names in the FIR include Shadab Chauhan, Maulana Mufti Nadeem, Abdur Rehman, Gulzar Ansari, Anil Kumar Meena, and Pooja Shakun. Rajasthan-based Maulana Mufti Nadeem had threatened to gouge the eyes of Nupur Sharma and chop off her hands in presence of state police.
Saba Naqvi had shared a picture of Bhabha Atomic Research Centre on 18th May 2022 to take a swipe at the Shivling discovered inside the Gyanvapi compound. Attributing it to Whatsapp, Naqvi shared an image of the huge dome of the centre with a caption that said, “Huge Shivling discovered at the Bhabha Atomic Research Centre.”
However, soon after she shared the picture, a raft of social media users objected to her tweet, accusing Naqvi of hurting the religious sentiments of Hindus by insulting Shivling and trivializing a consequential discovery made at the Gyanvapi mosque that could have profound implications in determining the result of the ongoing dispute. Naqvi later deleted the tweet and apologized for her callous tweet mocking Lord Shiva.
Similar ‘jokes’ on Shivling were shared by several others including TMC MP Mahua Moitra and Economic Times.
Shivling discovered inside the wuzukhana of Gyanvapi mosque
On completion of the videographic survey of Gyanvapi mosque on Monday (May 16), petitioner Sohan Lal Arya informed the media that a Shivling was found inside the complex of the disputed structure. The Shivling was reportedly recovered after draining out the water from wuzukhana, the place for ceremonial ablution that Muslims have to undergo before offering namaz.