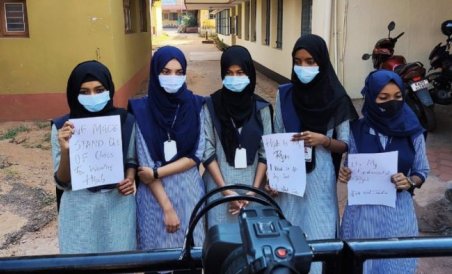 REVOLT: A group of seven girls belonging to the Progressive Student Movement, a Muslim organisation, insisted on attending classes wearing their hijab in Karnataka. Following protest schools are insisting that all students wear the officially designated uniform while attending schoolX.

The attack on the dignity of the Muslim community has intensified after Narendra Modi came to power. Controversies have been provoked in the name of hijab, alleged consumption of beef and now the Gyanvapi Mosque controversy where it is being claimed that shivlinga have been found. More recently the homes of Muslims protesting against Nupur Sharma’s blasphemous remarks about Prophet Muhammad have also been targetted for buldozing. The Supreme Court has now ruled that no homes may be buldozed without official permissions from the courts.

A few months into the hijab controversy and amidst the contentions around the Gyanvapi mosque, some Indians are back with another blow to the Muslims of the country – an attack on our Prophet, who was shamelessly defamed on a national platform by the now-suspended national spokesperson of the ruling party in the country, Nupur Sharma. She derogated him over marrying Aisha at a very young age. The comment was made on 26 May and Nupur Sharma was suspended on 5 June, following backlash from Arab countries. There are several reasons why this narrative is extremely unsettling and worrying for me and my fellow Muslims living in India.

Questions Over Aisha’s Age, but None On Child Marriages
Soon after the comments made by Sharma surfaced on the internet, several social media platforms were flooded with questions around Aisha’s age at the time of her marriage with the Prophet. First things first, Islam as a religion dates back to the 7th century, when the idea of the “right age to marry” was lost on humans. It was a time of extreme tribalism and cluster culture. Most of the historic literature from the time is silent on even the existence of women, let alone show any signs of respecting women’s rights. With the advent of Islam, Muslim women were recognised and awarded respect. They were guaranteed several rights based on the holy text of Quran.
It must be borne in mind that even in the 7th century, when this marriage took place, Aisha had the right to ‘Mehr’ (customary amount paid to the female in Islam), the right to divorce, unlike in India, where the concept of Hindu females seeking divorce came to be only in 1955. Additionally, women in Islam are given the right to choose their partners, contrary to what most people believe. In fact, even in the Prophet’s last sermon, he directed men to respect and take care of women.
Coming back to the age debate, given that all this happened approximately 1450 years ago, it was a general norm for women to be married as soon as they hit sexual maturity. Now, let’s for a moment ignore the scenario 1450 years back, and look back a 100 years and see when we as a nation really made advances towards curtailing/banning child marriages. The first endeavour to restrict child marriages dates back to 1929 in India. Ever since then, several laws have been put in place.

An Apology Long Due
If the several instances of lynching, hijab shaming, Hindutva sloganeering outside mosques weren’t enough, we are now being ridiculed by way of nasty comments on our beloved Prophet. Such vile comments made by a then-spokesperson of the ruling party makes us Muslims back here wonder if we have any place left in this country to live peacefully and profess our religion. No action was taken by the ruling government against Sharma until Arab nations intervened.
Spewing venom at the Prophet is like spewing venom at our entire community. How can we, claiming to be a secular nation, be okay with insulting Muslim’s most pious religious figure on national media? Why are people not questioning the repeated digs being taken at our community on a consistent basis? Why is this hate speech being propagated without any serious intervention by the government? We are forced to question if the suspension of Sharma is really to send a message of “no hate against any religion” or to appease Arab nations, which are the major providers of oil to India.
In today’s India, people do not bat an eyelid over public slogans of “Jai Shri Ram”, but if a Muslim were to publicly scream “Allah-u-Akbar”, I don’t even want to imagine what repercussions that would bring.

My Friends Have Turned Mute Spectators
I, as a Muslim in the country today, am facing discrimination on a daily basis. I have been rejected by landlords who don’t want to rent their places out to Muslims, cab drivers have cancelled their rides due to my religious identity, I have been trash-talked for supporting my fellow Muslim females’ right to wear hijab – just because I don’t wear it myself. Over the past few years, my identity as a Muslim has shadowed everything else about me. Friends from other religions who I grew up with and my colleagues have suddenly become mute spectators to all that is happening in the country.
However, having said that, I have also had some of the most supportive and encouraging friends who belong to different religious backgrounds, through all this. While a lot of damage has been done, I still hope that there is scope of a better tomorrow if we collectively take accountability. The India that boasts of a diverse culture can be saved if we Indians raise our voice against the perils that infest us today. If we don’t do it now, it might be too late. Today it is us Muslims, tomorrow it could be any other minority. This isn’t just about one community; this is about the country we all call home.
(The author is a lawyer by profession and works in the public policy space. This is an opinion article and the views expressed are the author’s own. The Quint neither endorses nor is responsible for them.)
(At The Quint, we are answerable only to our audience. Play an active role in shaping our journalism by becoming a member. Because the truth is worth it.)