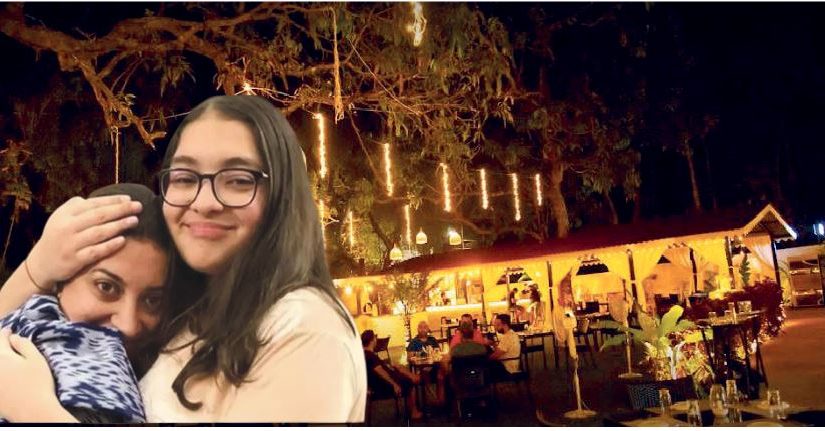 IRRESPONSIBLE: No Indian mother, particularly of the saffron brigade, will encourage her teenage daughter to run a bar and a restaurant which serves beef and pork. Smriti’s daughter Zoish is reportedly educated abroad and has been running Silly Souls in Assagao in north Goa. It is alleged that the bar and restaurant do not have a license to serve liquor and the structure itself is illegal.

The daughter of Smriti Irani of TV soap opera ‘Saas bhi kabhi bahu thi’, who is a senior BJP leader and Minister for Women and Child Development and Minority Affairs, is proud of her foreign-educated 18-year-old daughter running Silly Souls, a bar-cum-restaurant in Assagao which serves beef and pork on its menu. Smriti Irani shot to fame after she defeated Rahul Gandhi in the Parliamentary election from Amethi constituency. She is married to a Parsi, Zubin Irani

The restaurant run by Irani’s daughter, Zoish, has got a show cause notice from the Goa excise commissioner for allegedly holding an illegal bar licence.
An upmarket restaurant in Assagao, North Goa, run by Union minister Smriti Irani’s daughter, Zoish, has hit the headlines for the controversial manner in which it acquired the renewal of a liquor licence in the name of a person long deceased.
On July 21, Goa’s excise commissioner, Narayan M. Gad, issued a show cause notice to Silly Souls Cafe and Bar run by Zoish Irani based on a complaint filed by lawyer Aires Rodrigues, who said that “fraudulent and fabricated documents were produced” to acquire the liquor licence.
“The licence was renewed last month, despite the licence holder having passed away on 17/05/2021,” the show cause notice said.
It noted that the application for the renewal of the licence was made in the name of Anthony Dgama on June 22, 2022, though Dgama had died in May the previous year. The application “was signed by someone on behalf of the licence holder with an undertaking that ‘please renew this licence for the year 2022-23 and will transfer the said licence within six months,’” the excise department said.
A hearing in the matter has been fixed for July 29.
Rodrigues, who managed to lay his hands on the documents through an RTI application, said he wants “a thorough inquiry into this mega fraud orchestrated by the Union minister’s family in conjunction with excise officials and the local Assagao panchayat.”
According to the lawyer, excise rules in Goa allow a bar licence to be issued only to an existing restaurant. In the case of Silly Souls Cafe and Bar, the excise department bent the rules to give the owners a licence for foreign liquor and another one for Indian-made foreign liquor and country liquor in February last year, even before the posh outlet had a restaurant licence to operate.
All the excise applications were made in the name of Anthony Dgama whose Aadhaar card issued in December 2020 shows him as a resident of Vile Parle, Mumbai.
The lawyer, who spent months digging into the case after a tip-off, also managed to trace Dgama’s death certificate from the Municipal Corporation of Mumbai. He now wonders if such a person was in any way connected to the sprawling 1,200 square metres property in Bhouta Vaddo, Assagao that houses the Silly Souls fine dining restaurant.
In a YouTube segment with food critic Kunal Vijaykar, Zoish Irani said though Goa was a huge tourist hub, it lagged in high-end dining of international calibre and she hoped Silly Souls would become the “food destination” of Goa.