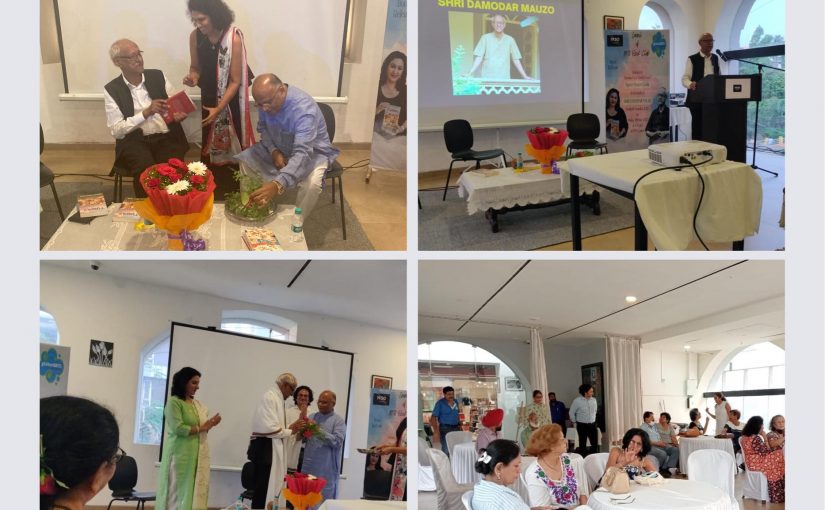 JNANPITH AWARDEE DAMODAR MAUZO LAUNCHES VASCO BOOK CLUB: Konkani Novelist Damodar Mauzo released the novel Tijara’s Mystery Code by Hemma Myers Sood at a function held in port city Vasco da Gama on July 29, 2022. At the same time he also launched the Vasco Book Club which is the first of its kind in Vasco. It is heartening to note that book clubs are coming up in Goa to promote the reading habit anew. The book club sponsored by the Goa Literary & Art Club in association with 1930, Vasco, will serve as a platform for book lovers, authors, writers and readers to discuss and interact on the subject of books and associated matters.

THE death of an elderly couple back in Goa in a road accident is very tragic. The battle to bring down road accidents has to be an all-out sustained one. It is equally horrifying to see young school students riding two-wheelers for joy-rides! Are they old enough and competent enough to ride a two-wheeler? Parents must take responsibility for their children riding two-wheelers in a responsible manner so they as well as others are safe from cheap speeding thrills.

Road safety is a most basic concern for each and all of us collectively. Road users, government and the police, who are entrusted with powers to ensure that the law is upheld and respected, must be aware of punishment. Prevention is better than cure!

Chief Minister Pramod Sawant’s advice that people should not have a liquor bar at home but instead have a library of books is amusing. He and his ministers must practice what they preach and be more coherent and easily understood vis-à-vis public matters. A bar and a library have no relationship to each other but one may reap the benefit of both in the safety of the home.

After all isn’t Goa supportive of casinos? What is worse – libraries and bars at home or dens of  iniquity for the benefit of a few with ill-gotten gains most times if you check?

THE Goa Police after taking a serious note of the sudden rising accident rate, including the fatalities, and have finally launched a special drive throughout the day (including at night) to severely penalise those over-speeding and driving under the influence of alcohol across the state of Goa.

The police have also decided to book parents under the Indian Penal Code if they come across underage children driving vehicles on the road in Goa. Sounds like a very good decision but will the guys really take this drive to its logical end or will they slowly discontinue the same after coming under fire from certain quarters in Goa?

It has become a big fashion lately for many to drink (especially in the afternoons and late at nights) and drive irresponsibly like Bollywood filmi-actors, they take life lightly because of the cheap booze available throughout Goa every few metres. Forget the youngsters drinking, today one will find even government employees, cops from the traffic cell who are supposed to set good example for others coming fully drunk on duty and  driving their own personal vehicles recklessly!

When will the government really punish its own employees and take them to task in Goa? The  government instead of trying to catch the bull by its tail rather than horns by temporarily unleashing cops from the traffic cell, to extort hard-earned money of all the helpless two/four wheeler users, in the name of implementing road discipline, should first try to cut down (if possible should permanently shut down) the number of bars/liquor outlets drastically.

Enforce some strict restrictions on the sale of liquor on top priority basis, give harsh punishments to those indulging driving under the influence of liquor and, and make our roads in Goa safe to drive up or down. Hope better sense prevails!

THE spate of deaths on the roads of Goa have  forced the Police to get to “work.” They are now on a spree checking drivers for drunken driving. We have been down this road before. Why the stalling and now re-starting? Because, once the tourist footfalls increase, the Police only show locals being checked. Just like the drive against illegal massage parlours — the shady legal ones are let off — and drug peddling, all a show.

What Goa continues to be in denial mode about is the consumption of intoxicating/stupor inducing drugs while driving. Why no checks on the same? How can they check the same? For many current  jetsetters liquor is passé!

At Khandepar a policeman drove his car into a house. The house owner disclosed the facts of the car having no insurance and tinted glasses. The policeman returned with eight others saying he cannot pay for all the damage. The Police themselves continue to break laws — tinted glasses, no insurance. Clearly, the policeman  misuses his authority and can therefore not procure a car insurance. Strangely, RGP/AAP continue to disappoint by showing ignorance or connivance!