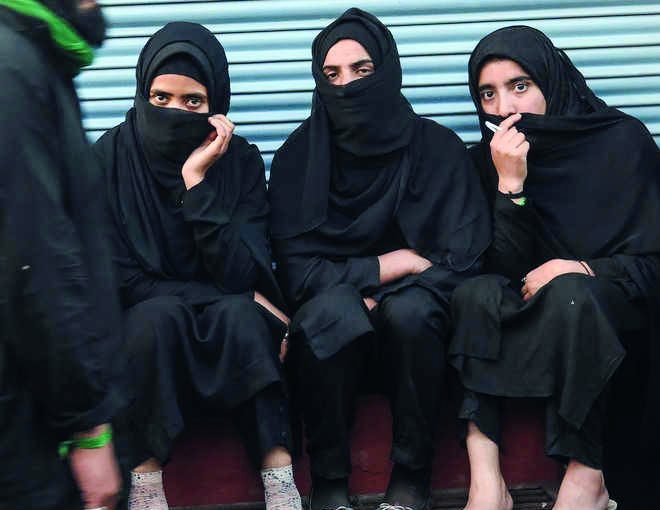 MENSES: With strict sharait laws being enforced puberty is a very painful and threatening experience in Pakistan. It is also threatening as girls are married The moment they reach puberty.

In the absence of proper education menses is a traumatic affair not only in Pakistan but even in the rural areas of India. Pakistan desperately needs to see the Hindi film `Padman’ (Akshay Kumar is the lead actor).

The week after Hafsa returned from hospital, we visited Baba with a box of his favourite sohan halwa. Baba took the mithai from Aftab, covered it with a newspaper and laid it to one side. Then he began swearing at the besharam Meesha Shafi, saying the whole tamasha was her fault. ‘Who am I?’ he said. ‘Am I to blame? It is Allah’s will.’
He gave each of us a dozen of his new business cards, saying we should distribute them. The front had the image of Baba in a white kanzu and skull cap, holding a tasbih; the back read: For shrine donations contact Baba Rehman, Mobile: 031-911-786. Allah rewards those who give. Photos #4 and #5 are shots of the front and reverse of Baba’s card. Later, however, some of us remembered it differently. Imran recalled that Baba invited us to his office, passed around the halwa, and we had sat in silence wondering about the truth. One incident stands out in our memory. It was when Salim told us he’d found, in the rubbish heap behind the shrine, rags soaked in blood which he said belonged to the girls.
We mocked Salim for sniffing around the girls like a dog in heat and jeered at him for following the smell of fresh blood like a churail. Shortly after that, when we threatened to beat him if he didn’t show us, Yunnus took us to see some bricks drying in the sun which he said the girls had made from the ash they’d collected from the clay lamps.
He demonstrated, with jerking movements, how the girls wrapped each brick in a rag and used it to absorb the blood that dripped down their legs every month. Repulsed, we called Yunnus a pervert. But even as we joked, we’d never been more aware that the girls were no longer children, but young women. We noticed their budding breasts, the swagger of their hips and a new listlessness about them. And by and by, we came to realize that if one of them was on her cycle, all of the girls would disappear because they were forbidden from entering the shrine, begging at the steps, or eating free food from the langar. This was a relief, for the very idea of female blood was repugnant to us.
However, we all admitted that what really infuriated us was Meesha Shafi and the ‘Hot Mango Chutney Sauce’ concert. According to Imran, pop concerts were immoral. Salim said Hafsa was a thief as it was obvious that she’d stolen Baba’s money to buy the ticket, while Aftab insisted, irrespective of the concert, that Hafsa was going to hell for attempting suicide.
We interrogated Erum Bibi about the ticket. She clarified that although Hafsa had shown it to her, the girl had refused to tell her from where she’d got it and who’d promised to take her, only to be let down on the day of the concert. These questions left us at a dead end, as none of us wanted to ask Hafsa for answers. If you look at the hospital records, you’ll see that Dr Arshad’s assessment of Hafsa’s mental health is quite detailed. He diagnosed her attempted suicide as ‘an act of aggression provoked by extreme poverty and the degradation of her life’.
Dr Arshad’s reports were shared with us by Erum Bibi, who’d removed and returned the file from Baba’s office at our request. Photos #6, #7 and #8 are images of the relevant pages. Dr Arshad also warned Baba that any further such incidents could lead to negative publicity and closure of the shrine by the Multan City Council. This frightened Baba and led him to make some changes. After Hafsa returned from hospital, the girls no longer begged at the entrance steps, the roof of the backyard was repaired, and a lockable toilet and washing area with a tap with clean running water was allocated to the girls. However, the biggest difference we noticed was not in Baba, but in the girls’ attitude.
One Sunday evening, about a month after the incident, we heard loud music coming from the shrine compound. The track sounded suspiciously like Meesha Shafi’s ‘Hot Mango Chutney Sauce’, so we rushed to check what was going on. Imagine our disgust and horror when we found the sounds emerging from a radio in Baba’s office, the door was wide open and the girls were dancing and belting out the lyrics, ‘Why are you so jealous?’
Hafsa was standing on Baba’s desk swinging her hips; Maryam was prancing around, her hair wild around her face; Zainab, with her swollen belly, was waving her hands in the air; and Laila was jumping up and down doing bhangra. Aftab called them besharam whores, Salim covered his ears and asked for Allah’s mercy, and Imran said the bitches belonged in hell. We could not believe our eyes, and when Hafsa jumped off the table and slammed the door in our faces, we knew then – there was no hope for them.
This excerpt from Farah Ahamed’s ‘Period Matters: Menstruation in South Asia,’ has been published with permission from Pan Macmillan India.