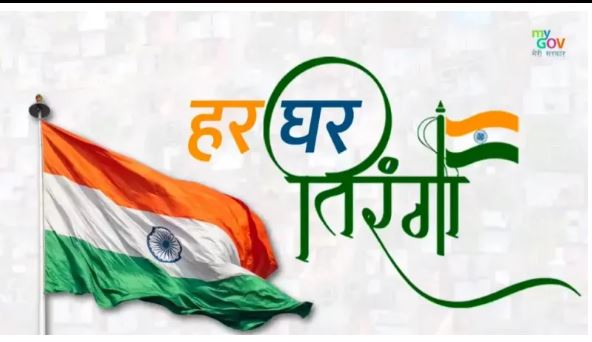 The national flag is being abused to promote the saffron brigade. The saffron in the flag does not stand for Hindutva. It stands for courage.

The national tricolour is once again the subject of canny realpolitik.
The great leader has given the call. We are all to wave the flag till August 15, Independence Day.
This demonstrative espousal of the tricolour, or tiranga, is of course attended upon by a historical irony; it comes from legatees of a cultural corner whose top ideologues – V.D. Savarkar and M.S. Golwalkar – had once said the tricolour could never represent free India and that the saffron flag had to be made the national ensign of free India. Earlier this week, the Congress challenged the RSS to produce even one photograph of Savarkar or Golwalkar with the tricolour. So far, no such photograph has emerged.
For some five decades after independence, the leading establishments of Hindutva did not hoist the constitutionally mandated flag over their assets, even when, in 1949, Sardar Patel had agreed to lift the ban he had imposed on the RSS on the explicit requirement that it would henceforth swear allegiance to the tiranga. It was only in 2002 that the RSS hoisted the national flag at its headquarters in Nagpur for the first time.
The current campaign thus reminds one of a verse from the poet, Shabeena Adeeb Kanpuri:
Jo khandani rayees hain woh mizaaj rakhtei hain narm apna,
Tumhara lehja bata raha hai tumhari daulat nai nai hai.
(The pedigreed rich have a self-effacing manner
Your loud speak says your wealth is a recent event.)
It is thus rather rich for the BJP to flaunt the tiranga to try and shame the very party that conceived it and gave it to us.
It was Jawaharlal Nehru who first raised the tiranga – in Lahore in 1929, where he famously proclaimed that poorn swaraj (complete independence) was to be the political goal of the Indian National Congress and of the freedom struggle.
Nehru enjoined upon all Indians to hold the flag as a symbol of their resolve to preserve communal unity, to oust the colonisers, and to die for it, if and when the call came.
A further sad irony that attends upon the government’s current efforts is that until now the national tricolour was seen to be intimately enmeshed with the ideals of the freedom movement, symbolised most of all by its weave in khadi accomplished by dedicated handloom workers – an exercise that derived from a composite Gandhian praxis.
Clearly, that was old India.
Now in “new India”, such sentiments are merely speed-breakers to the efficient march to world supremacy, realisable only through privatised commercial enterprise.
Thus, if the erstwhile weavers of the khadi flag no longer receive the kind of orders they used to, come Independence Day, it is just as well; a tiranga cast from plastic, manufactured by crony capitalist friends serves a more enduring pragmatic purpose.
And, never mind that other governmental injunctions require us to abjure the use of plastic in the interests of environmental health.
Thus, indeed, “new India” marries parvenu patriotism with plastic nationalism, both at the service of a delighted crony capitalism
What if a by-product of the celebration of the flag is to render the erstwhile makers jobless; or, more generally, what if some 70% of Indians are no longer able to afford two nominal (not to speak of square) meals a day, given the unconscionable rise in the prices of all essential commodities and shrinking work opportunities and incomes – things that the Harvard-educated Jayant Sinha, member of parliament, is unable to see. Often, the highest levels of education help us to think the elephant in the room is merely a contrived artifact, planted by the enemy, although all the time it is actually live and rogue, trampling many underfoot.
Or, is it that the flag is meant to become large enough to camouflage the said elephant and ward off public scrutiny? Borrowing from the American poet, Edna St. Vincent Millay (with the first word, ‘love’ in her poem substituted by ‘the flag’):
“The flag is not all, it is not meat, nor drink, Nor slumber nor a roof against the rain”
We may add the plea: all Indians suo motu love their tiranga, and know how to savour its meanings. Do not ask them to honour it by fiat, just as you do not preach to them the virtues of loving their family. And do not think they are not wise to the real purpose of the euphoria; they have seen these things before over the past few years, even those who voted for you. They know that this distraction, coercive as it is, is not the answer to their lived conditions which they are now habitually protesting in one place or another.

Take it from a mentor
It is generally thought that Jayaprakash Narayan, a man who never either coveted or accepted any office, including that of the prime minister, has been a source of inspiration for the right-wing of Indian politics, especially since his highly-lauded movement against the Emergency imposed by the Indira Gandhi government in 1975.
Here, then, is an instructive vignette from the career of that truly outstanding democrat. On August 11, 1955, a student protest broke out at a Patna college over bus transportation problems. Some violence accompanied the protest, and one student was killed in the police firing which followed. Four days later, on August 15, Independence Day, some protesters burnt the national flag.
Jawaharlal Nehru, then prime minister of India, expressed dismay at this occurrence related to the flag, though the whole of Bihar was worked up about the death of the student. “It will not be an exaggeration to suggest,” wrote former foreign secretary Muchkund Dubey years later, “that this agitation marked the beginning of a change from Congress-led governments towards the formation of governments led by non-Congress coalitions in North India.”
On September 1, 1955, the now legendary JP issued the following statement:
“Patriotism does not consist only in the worship of a piece of cloth, but in certain virtues, certain values of life, certain standards of public conduct and government” (India Affairs Record, October 1955).
These indeed are words that speak pointedly to the situation in which we find ourselves today.