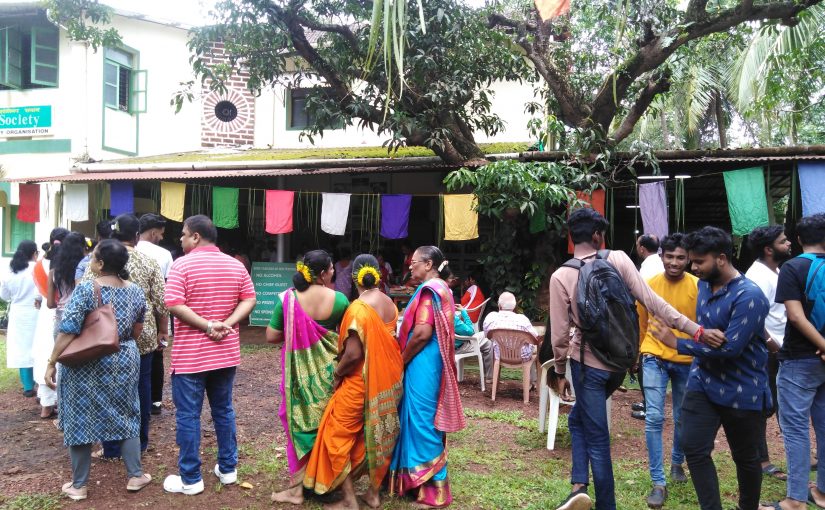 LOTS OF PEOPLE TURNED UP AT THE 75TH INDEPENDENCE DAY CELEBRATION AT PEACEFUL SOCIETY MADKAI…lining up for the community lunch prepared by a local village women SHG at Madkai, all were happy with the shudh vegetarian lunch

IT WAS India’s 75th Independence Day and there was too much of noisy and unruly “azadi ka amrit mahotsav” drumming into my ears in capital city Panaji. I wanted to run away to some peace and quiet and wishful thinking and what better thing to do than to be a little adventurous! I don’t go out on my two-wheeler out of Panaji a lot but sometimes I do when something is biting me.
Here out at the Peaceful Society orchard land complex out in the countryside in Madkai, an independence celebration of the very best kind was going on by the time I reached there mid-morning. One just after my own heart! Goencho Festakar Marius Fernandes and Company had lined up a fun itinerary of simple joys, singing and dancing, demonstrations of how to make village utility crafts for household use – and a most agreeable monsoon day vegetarian lunch prepared by the feisty Anjali Anant Naik of Madkai village. This is the real lunch to relish if I may say so and what our children should be eating in school every day for nourishment of mind and body, heart and soul!
What was it? It was a simple but painstakingly prepared menu of such things as ukdo zitt, sures zitt, choneacho ros, taikilyachi tarkari, kuddukechi sukhi bhaji, tero masala patal bhaji, the usual papad and a most memorable “kormaliyoche lonche” (I still have to find out what that is but it was most divine and I could have bought a bottle of it if it was being offered on sale) and finally “gauti paish” and a most amazingly flavorful “methyacho pez.”
The feast was prepared by local women’s self-help groups of Ghanraj and Shri Ganesh. Meet the hardworking women’s team – Rashmi Naik, Pratibha Parsekar, Sandhya Naik, Pratima Naik, Reshma Parab, Kumud Naik, Rajeshri Naik and the amazing Anjali Anant Naik who set the pace in cooking the lunch. The word had gone out that that all visitors for the fest should bring their own plate and cup if they wanted the free lunch! Of course not all remembered but mercifully the Peaceful Society’s kitchen had enough stainless platters lined with banana leaf and atop which everyone helped themselves to the lunch which just one of the highlights of the Independence Day celebration!

Indefatigable Goencho Festakar Marius Fernandes takes me aside to explain to me that for all their community festivals they’re trying to be 100% eco-friendly. Hence, the insistence that everyone carry their own plate and glass from home just like their should take their own tiffin dibba if they’re buying food from outside in restaurants and eateries! An excellent idea which Chief Minister Pramod Sawant’s government should promote.

MANGO TREE
HERE at the Peaceful Society which reminds one of a Gandhian ashram of old there’s a mango tree which takes pride of place and beneath which everyone wants to gather. At a table here some of the locally crafted produce was on sale: the black pepper of the Peaceful Society’s orchard lands (going at Rs150 per package and I saw someone buying up the whole lot), there were also tempting besan ladoo and I bought a packet, then there was green chili water pickle, bay leaves, coir mats, brooms and much more to buy if you wished.
Earlier in the morning there were some demonstrations of how to make brooms from coconut palm spines and weave lovely green mats from coconut leaf central ribs, also how to pat out cow dung patties to burn in a fire! I am given to understand that the Peaceful Society farmhouse complex at Madkai is some four acres of land with cottages for visitors to stay if they wish. There’s a main house with a kitchen on the first floor and a few outhouses for utility use, it has in the past hosted many meets on some Gandhian occasion. The village women of Madkai-Kundaim cook up a community lunch feast to shock one out of one’s senses…the way I see it this is real food and not the sick food we eat day in and day out driven by our urban lifestyles in cities.

OVER a hundred folk celebrated the Pattoieoche Fest Independence Day. Anjali bai demonstrated how to make patoieo and pudde – two rice flour sweets stuffed with a choon of freshly grated coconut and palm jaggery, altogether steamed in turmeric leaves in a huge copper pot over a wooden choola. These patoieo were distributed to everyone by the tea-time came around and most everyone was feeling relaxed and happy over a day well spent!
Most watched, a few participated in the ghumtacho nach, fugdi nach, duvli dance, skits of village life and times were performed a coconut shell orchestra performed, tapping their coconut shell halves called “kotieo” in rhythmic beat).
Amongst the visitors who came to partake of the village Independence Day celebration were some familiar and unfamiliar faces – Jessyl and Nathan Fernandes of “Being Goan” magazine, Ivy Rosario from Soccoro, Rajan Naik, advocate Vasudeo Prabhu Verlekar, Prakash Kamat, Fr Derrick Fernandes of the Pilernekars theatre group, Dr Valerie Pereira, Rina Jain and some more…Richard Carvalho, Avertano Miranda, Brian Parkar, Avit Bagle (very articulate and a fund of knowledge, he is the editor of Dainik Herald), there’s also Kanikbhai who takes care of the Peaceful Society’s day-to-day running on the premises.

GANDHIAN PHILOSOPHY
NOT least of all I said hello to some of my favorite Gandhian-minded people of an older world – take a bow Barathi Bandodkar and Kalanand Mani!. They’re the heart and soul of Peaceful Society at Madkai which lists itself as an NGO engaged in various social services at local village community level. One should do down memory lane with the much seasoned and mellowed Kumar Kalanand Mani, for he has been around from West Bengal to Goa and has many stories to tell about growing up in the independence years of old in West Bengal.
He married Barathi, a Goan girl from Dharbandora and the couple have two daughters. It was Kalanand Mani in his brief enlightening brief who reminded all of us that today – that is, August 15 long ago – that Mahatma Gandhi had gone on a fast to death in Calcutta to stop the Hindu-Muslim riots which had broken out in undivided Bengal.
So on August 15, on Independence Day, we should really be fasting! In memory of that time in history when some fanatics and lunatics set an already traumatized sub-continent on fire and it later ended with the partition of West Bengal and East Bengal which went to Pakistan (later it became a liberated Bangladesh courtesy Prime Minister Indira Gandhi)….“so we had two bloody partitions, not one!” Indeed, India has a very heavy price for its independence.

Read and remember your history very scrupulously, my friends, and don’t get carried away by today’s bombastic talk of more wars of independence! The older generation has seen all and never want to ever see or re-live again the horrors of warfare and partitions, do you? No more blindness all around, please.