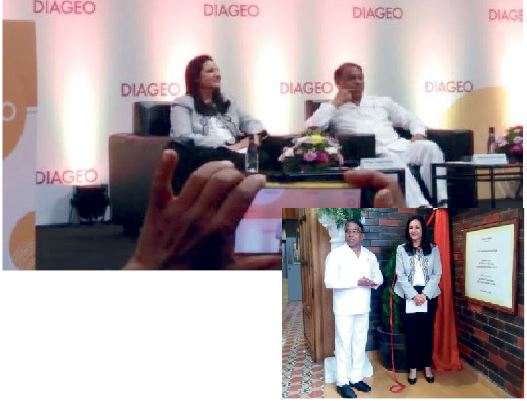 GOA’S industrial estates are interesting places to visit once for it is then one gets an idea of what all goes on there. Lately, they’ve been inviting the government’s attention to see if employment can be created in the many companies of various distinction located there. Recently, I was intrigued by the fact that although everything else may go into plastics – liquor and the most premium potable water don’t. Liquor comes in some of the most exquisite glass bottles. Distilled liquors, liqueurs, fermented beers and other alcoholic beverages are always in fine glass designer bottles. So much so I always feel like I want to take a bottle for I am bottle crazy. Naturally, seeing how plastic life is becoming here, there and everywhere.
To begin at the beginning media people were invited to visit the Bethora Industrial Estate in lush and water-rich Ponda taluka on August 16, 2022. Chief Minister Dr Pramod Sawant was due to launch Diageo India’s “Craft and Innovation Hub” but he called if off at the last moment and Water Resource Development, Co-Operation and Provedoria Minister Subhash Shirodkar did the honours. This is all runaway liquor baron Vijay Mallya’s old territory and Diageo has bought over USL; revamped the liquor plant to state-of-the-art status for their iconic brands. Johnny Walker being one of them, arguably the largest selling whiskey in the world.
The plant is a four-acre spread of modern day lightweight warehouses, factory, work places, whatever you want to call them – there’s a novel Consumer Experience Centre which entertains guided tours for visitors and those interested in learning more about the liquor business with Diageo which is reportedly one of the largest and leading alcohol company in the world, with Diageo India in India (HQ Bengaluru).
Diageo is a huge name in the UK and USA and the CEO I learned from a Mr Anant Roy is Ivan Menezes (must have Goa connections). The Diageo HQ offices are in the UK and Diageo itself was formed when it merged with parent company Guinness which has already taken over a number of other liquor and perhaps hospitality companies. Diageo India is reportedly India’s leading beverage alcohol…

To cut a long story short Diageo India’s latest investment is to lay down Rs45 crore for an Art Craft & Innovation Hub at their Goa plant. It was this which was inaugurated by Minister Subhash Shirodkar who said he was interested in a program in which the company will train 1,000 local youth over three years – to make fit for employment as also in self-employment roles for the hospitality, tourism and allied industries. They will get over 300 hours of skills-based training focusing on holistic development in which academia and industry professionals will play a role. Placement upon passing and approved certification is assured.
SPEAKING on the occasion MD & CEO of Diageo India, Hina Nagarajan, possibly one of the very few women in the top notch liquor business, confirmed that even liquor now enjoys a crafts stature and Goa is the ideal place for handcrafting fine spirits. Here is all the expertise to delight the next generation of liquor consumers who I may add must be very discriminating and wealthy! Who else can afford the iconic highly priced liquors? Undoubtedly, the hub will serve as an incubator for start-ups for they have an infrastructure to build on.
Diageo, said Hina Nagarajan, is very environment friend and believes in replacing or regenerating twice the amount of water withdrawn from a water source! That’s very reassuring to hear considering all the stories of Coca Cola and other soft drinks companies we have been hearing about. From what I understand grains and ingredients used in the making of liquor are washed endlessly before being put for fermentation or distillation or both. Correct me if I am wrong! Hence, the gaguantan usage of water.
The company has a 52 years old relationship with Ponda in Goa along with the acquisition of Kesarval Beverages in 1970 which renamed as McDowell’s & Co Ltd and its subsequent acquisition by United Spirits Ltd. The company recently acquired a strategic minority stake in Goa-based emerging craft gin company, Nao Spirits & Beverage Pvt Ltd, the makers of the award-wining brands Hapusa Dry Gin and Greater Than London Dry Gin, Epitome Reserve Rare Whisky, Godawan Artisan Whisky, etc. Godawan whisky sales percentage goes towards saving the Great Indian Bustard in the deserts of Rajasthan or something like that.
BUT to come back to my first love — gin and bottles and bottles! I think the real fortunes now are in the bottling of premium waters, such as the volcanic water called Kelzai. I wanted to quench my thirst while at the exhibition hall where media was entertained to lunch after the press conference and looked around for water…I spied this lovely empty bottle of the much desired Kelzai water, more alkaline than the other premium waters presumably. Rich and beautiful order it by the cartons like I imagine lesser mortals order crates of coloured, highly doped with sugar, soft fizzy beverages to increase rather than quench thirst!
(Sigh) I asked for a Kelzai water bottle but couldn’t find it, don’t know where the lovely premium 500 ml bottles disappeared. Later in the day while dropping in at Magsons’ liquor section I enquired about Kelzai and some liquor prices. They didn’t have Kelzai but at the Tinto Supermarket liquor section at Caranzalen I found the Kelzai litre pet bottle at Rs70, no glass bottle for money or love! The real money is in premium bottled water in glass and these days everybody wants to bottle pristine well water, volcanic water and mountains spring water….and, well, those who live in utopia are drinking it.
To hell with those who live in dystopia, let them drink plebeian re-cycled gutter and sewage water, something like that. In the Middle East they drink de-salinized sea water, it’s also bottled in mega containers. Anyway, you must know the key to the future lies in water, my dears. If only we could stop all water from going into bottles!
Water is one vital element Mother Earth gives us for free and free it should remain for all life on earth depends on it. Nobody should be able to dig deep, deep into the womb and bosom of the earth, to extract water on such colossal scale, that the earth’s underground equifer reservoirs collapse and dry up. To turn the life of innocent communities nearby who depend on that water in their day-to-day sustainable rock-bottom lifestyles into a nightmare. It’s happening around the world led so that the First World may live in style and forever.
On that note, it’s avjo, selamant datant, poite verem, au revoir, arrivedecci and vachun yeta here for now!