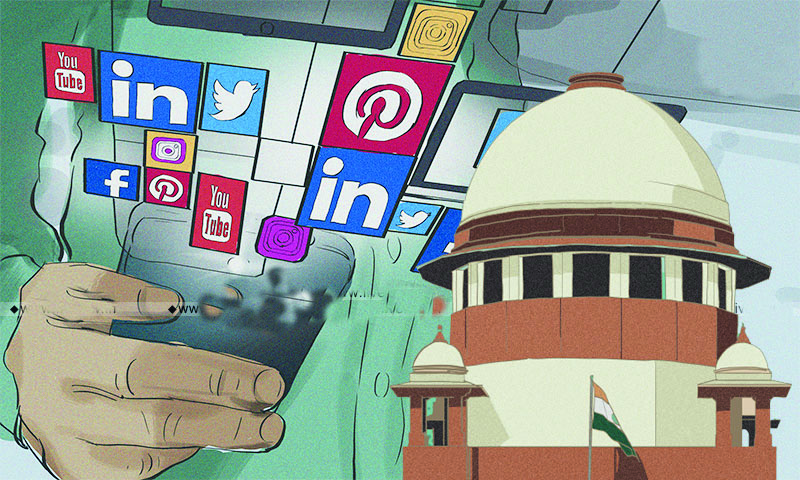 THAT the government decides who will enter the hallowed precincts of the Supreme Court is something we must all accept. With a resolution passed for the merger of the Goa Congress with the BJP, after eight renegade MLAs joined the BJP this week – despite pious vows taken before God in temples, mosques and churches – politics in Goa has become laughable!
Digambar Kamat, against whom a corruption case is pending for allegedly taking a bribe in the JICA case, is the leader of these eight defecting MLAs. He reportedly said:
“We spoke to God who advised us to do what is best.”
God in Goa is on the side of defectors or so Kamat would like us to believe. Never mind the corruption charge against him. Michael Lobo, who left the BJP because his wife, Delilah Lobo, did not get a ticket from the BJP, is another case in point. After both Lobo and his wife won on Congress tickets, they have now switched over to the BJP, presumably they will be suitably rewarded with ministerial portfolios despite loud protests that these stalwarts have voluntarily joined back the BJP after betraying the Congress.
Now, what has all this got to do with the judiciary? Such disputes always end in the courts where judges are called upon to decide these disputes. The mental make-up of the judge and his resilience to external pressures in the form of public opinion, and the threat of transfers, to an inconvenient bench and what makes a good judge.
Several months back the Karnataka high court judge, Justice H.P. Sandesh, had declared in open court that he was indirectly threatened with transfer for his remark against the Anti-Corruption Bureau during the hearing of a case which involved an influential IAS officer. Two staff members of Bengaluru city deputy commissioner’s office were arrested for receiving a bribe of Rs500,000 in exchange for a favorable order in a land dispute. The judge orally remarked how senior officers were being protected in the case.

NO RESPECT FOR LAW
SIMILARLY, Justice Surya Kant of the Supreme Court pulled up Nupur Sharma for her controversial remarks on Prophet Mohammed and asked her to apologise to the whole country. The judge said her comments “single-handedly set the nation on fire” and threatened national security in India. The judge asked, “What if she is the spokesperson of a party ? She thinks she has the support of those in power and can make any statement without respect to the law of the land.”
After this was reported in the media, 117 retired judges, 77 bureaucrats and 25 army officers led by retired Kerala high court judge RV Ravindran, signed a letter which called Justice Surya Kant’s statement “unfortunate and unprecedented.” This amounts to contempt of court and an attempt to browbeat the judiciary, but surprisingly no action was taken against these people.

RULING PARTY POWER
ALL this means the ruling party is so powerful that it can intimidate the judges of the Supreme Court who not free to speak their mind. Laypersons do not know that judges are free to speak their minds only within their court rooms and not outside, because they are granted total immunity for their judicial actions and statements which can never be questioned even in Parliament.
This is why it is vital for the people to know how lawyers are selected for the judiciary. For elevation to the high court, 1/3rd are selected from those lawyers practising in the high court whereas 2/3rd are elevated from the lower courts.
The chief justice of the high court advised by his two senior most colleagues, forwards the names of those selected to be judges to the chief minister, and through him to the governor of the state. Governments may come and go but they have more often than not had the final say in who will be elevated to the Supreme Court. Chief Justice Surjit Singh Sandhawalla heard a corruption case in the Punjab and Haryana high court during the late 1970s-80s, against Gyani Zail Singh before Indira Gandhi made him the president of India.
Sandhawalla sent Zail Singh to jail. Although the 16th CJI YV Chandrachud wanted to elevate Sandhawalla to the Supreme Court, President Gyani Zail Singh strongly opposed his elevation in the 1980s — reminiscent of Chief Justice Akil Kureshi, who was overlooked for the Supreme Court because the government had “a negative perception of his judgments,” according to Ranjan Gogoi.
THAT the apex court judges should not obstruct the government is evidenced by the fact that another judge, Justice P. Subramaniam Poti, directed the K Karunakaran government in Kerala to find out what had happened to an engineering student, Rajan, who disappeared during the Emergency. As a result, Karunakaran had to resign, but had his revenge when he used his influence to transfer Chief Justice Poti from Kerala to Gujarat after he (Karunakaran) returned to power.

GOVERNMENT HAS FINAL SAY!
THESE are just two random cases but despite the striking down of the National Judicial Commissions Act, 2014 and the 99th amendment to the Constitution, the Narendra Modi government does have a final say on who will be elevated to the Supreme Court. Senior advocate Gopal Subramaniam’s elevation to the Supreme Court was blocked by the government — as it was alleged that his integrity was doubtful because he interacted with criminals. Conveniently forgetting that senior advocates are upholding the fundamental rights of the accused to be defended by an advocate of his choice.
In Goa, we have the most distinguished senior advocate Surendra Dessai, whose integrity and knowledge of the law can never be challenged. A former IAF officer, he has a roaring practice with several high profile clients — does that imply his integrity is doubtful? That would be laughable — given the reputation and fame that he enjoys. As a leader of the bar, he has defended junior lawyers at the bar without taking remuneration.
The point here is that the system of appointing judges to the 25 high courts and the Supreme Court is faulty and needs to be rectified. Justice Chelameshwar was the only dissenting judge who upheld the NJAC Act and the 99th amendment to the Constitution which substituted a national-level commission for the collegium system of appointing judges.

ON RECORD
JUSTICE Kurien Joseph went-on-record to declare in public that he regretted being part of the four judges who struck down the NJAC Act. “Independence of the judiciary must be protected like the chastity of a virgin,” he declared at a summit in Delhi.
Today, whether the judiciary is really independent from the pressures of the executive and public opinion led by retired judges like RV Raveendran, needs to be examined.