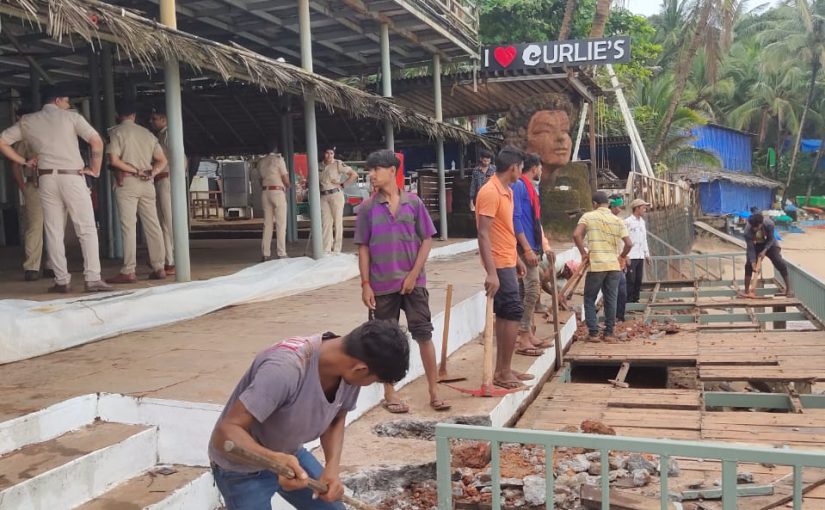 TORTOISE: Unlike in the case of the illegal Noida twin towers, the work on demolitioning `Curlies’ shack on Anjuna beach is proceeding in slow motion, why?.

AND a few stray thoughts for yet another Saturday. For a Saturday following the week when while two-30 storied illegal structure in Noida were demolished in 12 seconds, it is taking more than a week to demolish Curlies’ encroaching on Anjuna beach up in coastal Goa. For a Saturday following the week when colleges and universities seem to have given way to coaching classes. For a Saturday following the week when a group of Konkani writers protested against the discrimination in awarding Sahitya awards to books in Konkani literature. For a Saturday following the week when the controversy over the hijab and other Muslim rituals continued. For a Saturday following the week when registration for delegates for the International Film Festival of Goa has already begun. AND a few stray thoughts on while two-30 storied illegal structures in Noida were demolished in 12 seconds, it is taken more than a week to demolishCurlies’ at Anjuna beach. The excuse is that the nature of the area makes it difficult to use bulldozers. But this has not stopped the BJP government from using bulldozers against minority communities — irrespective of the nature of the land.
Even if it is assumed that there is no passage for a bulldozer to raze Curlies,’ explosives can be used as the authorities did in Noida in Delhi, and the entire structure would have turned to dust in a few seconds. In the first few days bulldozers were brought for the demolishing ofCurlies.’ The argument was that Curlies’ was encroaching on the beach and it is difficult to take bulldozers down a beach. Which is absurd because routinely tourists from Mumbai and Delhi drive their fancy cars up and down the beaches of Goa. In fact, beaches are the ideal places for using bulldozers. We have a suspicion that there is a deliberate cause for delaying the demolition ofCurlies.’ If bulldozers are not suitable why were they brought in the first place? It is absurd that they should now be engaged in limited and manual demolition of the notorious shack guilty of being a drug haven in the past and to this day (remember the killing of the drug-induced British young woman Scarlett Keeling).
Co-incidentally the delay and demolition has coincided with the handing over of the case to the CBI. This was when the Goa police had almost finished investigating the case and dismissing it as death by heart attack. However, everything changed when the case got both the Goa and Haryana governments involved (because was a resident of Haryana). So may be the Centre decided that it would have greater control, the political damage control, if the case was handed over to the CBI. Historically, handing the case to CBI is to be able to allow the Centre to manipulate a case.
However, the Phogat family is a politically very influential family in Haryana. The sister has won several medals for India in the Olympics and the Asian Games. It also appears from reports that police brought back the news from Haryana that Phogat is very rich and owns several cars and properties. The curious part is no motive has been established for the murder of the Tik Tok star and the Big Boss contestant Sonali Phogat. Sonali Phogat was a Big Boss in Haryana. There have been some clips circulating of the late Sonali Phogat shaking her leg at Curlies.’ There are no signs of any of the lehenga conservative dressing up, but she is shown wearing sexy hot pants. Since Phogat has been a wrestler it is difficult to believe that she was forced to take drugs. In any case, she was friendly with the two people who she had accompanied toCurlies’ that fateful day. As in the case of other crimes relating to BJP leaders, the Centre will finally decide who will take the bail.

COACHING CLASSES
AND a few stray thoughts on colleges and universities which seem to be giving way increasingly to coaching classes. Open any newspaper you wish to and they are full of coaching classes advertisements boasting about their students achievements. For instance, September 13 issues all reported about how Narayana Educational Institutions grab the lion’s share in the JEE-ADV 2022 exam. They claim to have got 3,402 ranks and five in the open category. In the last few days there have been ads from other coaching classes like Allens and others.
The majority of coaching classes are in the Rajasthan city of Kota. Almost every second building and hotel in Kota is either a coaching class or a hostel offering accommodation to students coming from various parts of the country. The government seems to have deliberately encouraged the devaluation of the colleges and the universities and the promotion of coaching classes.
Maybe Narendra Modi thinks that universities are a legacy of the British Empire and patshala is a better substitute for schools. The logic behind the popularity of the coaching classes is that it allows the students to concentrate entirely on the subjects they are interested in such as physics, chemistry, biology for medicine and physics, chemistry and maths for engineering. Earlier, even though there were national eligibility test (NET) for admission to medical colleges and IITG for engineering colleges, students had to secure at least 60% marks in both secondary and higher secondary.
So the dignity and the quality of teaching in the colleges had to be maintained. Now the students have to get only 50% to be eligible for the competitive exam. For students targeting 90% plus getting 50% in the secondary and higher secondary exam is very simple. This is made even easier by the competition between the various boards and CBSE and the elite senior Cambridge schools. Who keep giving grace marks to get higher percentages than the other schools. With the change in the pattern of education, the whole system has become a giant coaching class, where students focus only on subjects of their choice — and are fully ignorant of how and why Rajpath is being converted into Kartavyapath.

KONKANI DISCRIMINATED AGAINST
AND a few stray thoughts on a group of Konkani writers who protested against the discrimination in awarding Sahitya awards to books in Konkani literature. It is not widely known that Konkani is the only language in which Sahitya Academy awards are not given on the merit of the novel or poem or essay in the Konkani language. All scripts of Konkani including Romi, Devanagiri and even the Kannada and the Malyalam script of Konkani are eligible for the Sahitya academy award. The condition, however, is irrespective of which “lipy” the literary work is written in, an English translation has to be provided to the board of the Sahitya Kala Academy.
This is partly because there are not enough people on the Sahitya Kala Academu’s board who are familiar with Konkani. Moreover, the total prize for the awards cannot be more than Rs15 lakhs, as compared to the Rs15 crore in some states. This is extremely unfair as the spirit of a novel or poem is best reflected in the language in which it is written in. An English translation of a book in Kannada cannot sound the same as in the original itself.
Unfortunately, the Goan literary gang is a very selfish group. They are only concerned about awards for themselves. There are not many Konkani writers who can find somebody to provide an English translation and meet the cost of both the English and Konkani version. With not many competitors the majority of those eligible have already got their awards. Goan Observer will be delighted to help Konkani writers both in Romi and Devanagiri with English translations so that they can apply for the Sahitya awards.

CONTROVERSIAL MUSLIM ATTIRE
AND a few stray thoughts on the controversy over the hijab and other Muslim rituals which continues endlessly. There seems to be a lot of confusion both amongst Muslim scholars and the courts about the various aspects of Islam. In a recent High Court hearing the judges pointed out that all the practices recommended by Islam such as naamaz, roza, hijab, etc, were all mandatory. However, nowhere in the Quran it has been stipulated that it is compulsory for all Muslims to do the Hajj yatra.
The logic is that there is no penalty described in Islam for not observing the practices. So much so in the majority of cases many Muslims follow the practices according to their convenience. With the exception of fundamental Sharait Muslim rules which insist that all the directives should be observed. Forget about hijab, even the burqa is not mandatory. What is not understood is that various practices in various religions came up because of the circumstances of the times.
In times of war when there were lots of attacks on women, Prophet Muhammad suggested that the hijab or even the burqa should be worn. Unlike in the case of other religions, there is no Uniform Code of Conduct in Islam.
The practice of Islam in Goa for instance is to a large extent influenced by the migrants from Karnataka. Even the so called Urdu Hindi they speak in Bengaluru and Goa are very different. At the bus-stand in Bengaluru, the auto rickshaw driver will ask you “Kya so?” In Goa Kya is converted into Ki. In fact every language is full of shortcuts more suited for WhatsApp and Facebook.

IFFI REGISTRATION
AND a last stray thought on registration for delegates for the International Film Festival of India (IFFI) which have already begun. All registrations will be done online. However, registration done online will not make you eligible to view on OTT platforms. The focus theme of this year’s IFFI is likely to be patriotic films. It is expected that Ayan Mukherjee and Karan Johar’s Brahmastra starring Ranvir Kapoor and Alia Bhatt will be the opening film for IFFI. It is claimed that Brahmastra is based on Amish Tripathi’s books.
In the Shiva trilogy, as a last resort, permission is given to use the “brahmastra,” considered to be the nuclear bomb of ancient South Asia developed by Sage Vishwamitra. An interesting feature of Hindu religion is that it is not just the gods who take part in political games but also the grand old wise men called rishi who are forever manipulating the gods against Lord Shiva.
Theoretically, the Mahabharata is a classic in Hindu mythology in which the Bhagvad Gita is the heart of the epic saga of gods, goddesses, mortal men and immortal sages. In a sense the Bhagvad Gita reflects the spirit of Hindutva. I would not be surprised if the re-naming of the historical area so far known as Rajpath in Delhi to Kartavyapath is part of the current BJP government to systematically convert India into a Hindutva rashtra or raj sarkar of old with modern twists and turns.