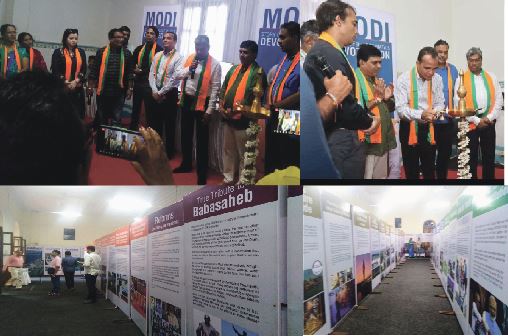 Amongst a spate of “Seva Aur Samarpan Abhiyan” events marking Prime Minister Narendra Modi’s 72nd birthday on September 17, it was Revenue Minister Atanasio Babush Monserrate who did the honours inaugurating a 2-day exhibition tracing the life and times of “Bharat Mata’s devoted son” in a special presentation on the first floor of the Old GMC college in Panaji. Accompanying him were Panaji Mayor Rohit Monserrate, Damu Naik, Datta Prasad and others. Tea and snacks were served to all visitors who came to view the exhibition.

ONE wonders whether the Indian National Congress after its many political mishaps in Goa will ever get its act together? Its latest decision to appoint an SSC passed as Leader of its Legislative wing, bypassing the very knowledgeable Advocate Carlos Ferrreira, says it all. Has the party lost all its senses and is on a suicide mission, determined to reduce the party to its final ashes without recognizing its past mistakes and not even attempting to take corrective measures.
Yuri Alemao may have learnt to fly planes but the handling of the current political turbulence is way beyond his reckoning. More so as his Dad is an accused before the Crime Branch in the alleged illegal mining scam. The Alemaos are now at the mercy of the BJP to remain insulated from the ED, IT and CBI as many from that gang of the eight defectors also do.
How could the Congress party not realize that Carlos Ferreira has over the years in his association with the party never ever wandered elsewhere, but the now chosen Leader of Opposition has hopped across parties in true spirit of his family clan, the Alemaos. The Congress party should have taken time to try and test Yuri’s honesty, loyalty and integrity to the party before taking such a decision which has surprised and astonished Goans across the State.
Adv Carlos would have put the case forward for the many who have no hope, no future and no trust in our failed political system and government. He would have logically and forensically taken the government to task over its failed policies, broken promises, lies and corruption.
Anyone else in the place Adv Carlos Ferriera would have put in his papers, but the gracious Aldona MLA for the love of his constituency and Goa, has acted as a refined gentleman, despite the political party he gave everything to choosing to side line the right man for the right post.
Let us leave it for another day, how Yuri Alemao is today officially a multi-crorepati without ever working as a pilot for a living. All this is by his own admission in the affidavit of his mind-boggling assets that he filed in February this year along with his nomination papers for the Goa Assembly elections.
—Aires Rodrigues, Ribandar, Goa

JOB-SEEKERS COMING TO GOA
IT is horrifying to learn that so many young people think Goa is a job paradise! Recently, a local newspaper reported that an Odisha native with two friends had come looking for jobs in Goa. At a food kiosk near Margao Railway station after arrival and eating at a bhel-puri stall, he suddenly grabbed the vendor’s knife and inflicted injuries on himself. Perhaps he thought this would be the best way to draw attention to himself and someone would give him a job…he is currently being treated at the South Goa District Hospital.
Clearly, the poorer class of youth are getting desperate and in a mood to injure themselves, or kill, or commit suicide — in the absence of jobs to earn an honest living. Are there no NGO organisations to help such youth looking for jobs in Goa in Goa? A rich state where politicians trade in defections, a business driven by multi-crore bribes! And here we have the tragedy of the unemployed youth growing in Goa and India!
—Pankajbala R Patel, Panaji

CONFUSED BJP GOVERNMENT!
EIGHT Congress defectors claimed confusion before defecting.This makes the strengthened BJP confused too! Revenue Minister Atanasio Babush Monserrate (standing in for Jennifer Monserrate) who has not gained anything thinks he is in the Opposition. He says nothing can be done about Zuari agricultural land sale. He wants the Opposition to challenge this in courts. Sorry, potholes on the new bridges, and you want IIT to solve the problem? Hire a company lawyer and check the same. Land has been taken from Goans: tell us what returns did land losers get? What lessons you learnt from this when giving land to IIT, NIIT, 5-star hotels? What are the risks of such mitigations and sell-outs? Goans must just sit back and say ta ta, bye bye. What kind of confusion rules the recent defections! This double-engine government is run by the Congress and the BJP, surely Engine 1 can call in the lawyers and go to courts to stop the betrayal and purchasing all around? AAP/RGP are also now politically seasoned about Goa’s defection politics whereby neither BJP’s B team/Engine No.2 have the inclination to protect Goa’s interests but they are busy selling out to Mumbaikars, Delhites, Gujaratis, Punjabis and the like! Business of development for them but not for Goans and in any case what kind of business is going on?
—R Fernandes, Margao