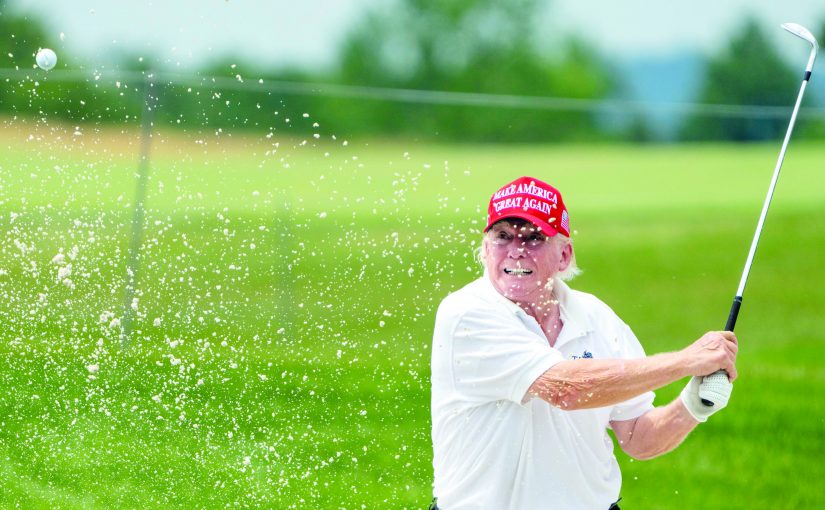 MINING LOBBY: For several years the mining lobby has been lobbying for a golf course because the Japanese are their main customers and they are crazy about playing golf for recreation.

To fight hate it is also necessary for action on the ground. An example, Minister of Health, Agriculture & Craftsmen Training Vishwajit Rane, having to drop the proposal for golf courses in Goa.

Glimpses of the Great Indian Newsroom
Very little is known about how decisions are made within newsrooms in India but sometimes, when professionals within it leave the organisation or are forced to leave it, the door flies open to afford important glimpses of the real story of how much of what we know as “news” is actually created in India.
When Punya Prasun Bajpai left ABP despite the great popularity of his programme, ‘Masterstroke’, we got to understand the many layers of pressure that were brought on to him. “On July 14, 2018, the proprietor-cum-editor-in-chief of the national news channel ABP, owned by the Ananda Bazaar Patrika Group, had a conversation with me along these lines: Proprietor: “Can you refrain from mentioning the name of Prime Minister Modi [in your programme]?”
Two years later, we had Tejinder Singh Sodhi’s letter that made public the reason why he quit Arnab Goswami’s Republic TV. We were told that while its owner and his coterie made “huge money”, the people who do the actual work were being given “peanuts”. Sodhi explained that it wasn’t long before he realised that the work he was doing there was not the journalism that he had joined Republic for; that he did not want to be used to do “hit jobs on behalf of Arnab”.
There are many slogging it out in various corners of the country who are ashamed of the journalism they are forced to do. Most recently, we had the case of Anil Yadav whose video went public after his resignation from the Lucknow-based News Nation, where he had been working for the last decade.
He put it bluntly, “I feel ashamed calling myself a journalist. I am a servant”. According to Yadav, Hindu-Muslim is the perennial flavour of the news season and if at all the reporter has an urge to bring down a political leader, keep off the Holy Cows but feel free to attack Rahul Gandhi, Priyanka Gandhi, Mayawati, and Akhilesh Yadav. In fact “screwing up the Opposition” may even get a journalist a much sought after promotion.
It is of course what we had suspected all along and which has depressed us no end, but such confirmation from the horse’s mouth is valuable. Perhaps one day it will help render a defining history of the media in the age of the Modi sarkar.

True Crime, podcasts and justice
There is something irresistible about criminal trials, which is why courtroom dramas in fiction are so popular. They also make for great journalism. The recent release of Adnan Syed, a high school kid from Baltimore implicated and then convicted for the murder of his ex-girlfriend, Hae Min Lee, in 1999, took me right back to a car ride on which I was taken while on a visit to the US. It was during a trip between Chicago and West LaFayette that I got absolutely engrossed within minutes in a podcast playing on the audio system called Serial.
Its protagonist was a young, bright 17-year-old son of immigrant parents who had a large circle of friends and a buzzing social life typical of American teenagers his age. The podcast didn’t need images to create the spatial dynamics of his living space, the car rides he made and the haunts he frequented.
We heard the voices of those who thought he was guilty and those who vociferously defended his innocence, including family members. We were provided glimpses, albeit over audio, of his young girlfriend, her infatuation with Adnan, how she got attracted to another young man, and how her body was later found in a distant corner of a park to the great distress of her classmates, including Adnan.
Then came the slow unspooling of what appears to have been shoddy investigation, followed by an equally shoddy court proceeding, which resulted in the incarceration of the 17-year-old. The biggest question that buzzes through it all is the obvious one: Was Adnan guilty of murdering his former girlfriend?
Serial does not provide a definitive answer, which arguably added to its allure. However, we hear Adnan and his straight-talking defence of himself from behind prison bars. He never sought to pin the murder on anyone else, but he did strongly plead for his innocence and resisted plea bargains that may have got him out of jail earlier but would have rendered him guilty for all time.
Today, news that he has finally been given his freedom under GPS surveillance, 22 years after he was first convicted, does cheer those who had, after listening to the podcast, concluded that he was not guilty. Of course, his continued freedom hinges on whether of the Baltimore state’s attorney’s office persists with the case, or not. What cannot be disputed, however, is that Koenig’s podcast has contributed towards a process of justice that may finally exonerate Adnan. It also did something else: gave a fresh lease of life to long form, serialised podcasting, bringing to it the compelling force of audio storytelling that often eludes its more glamorous filmed counterpart.