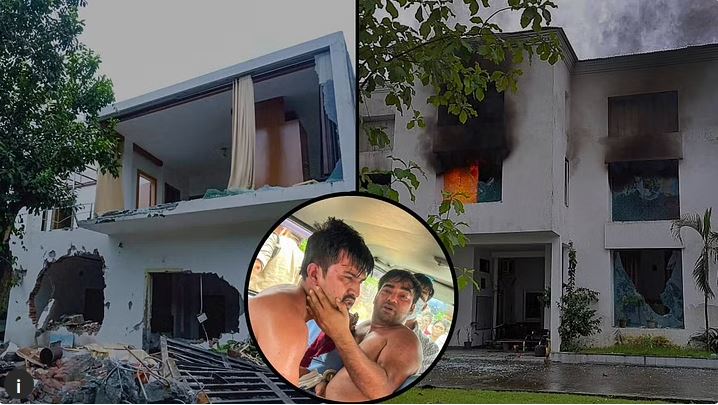 A BJP leader’s son Pulkit Arya who ran a resort in Uttarkhand was suspended by the BJP. Employees have described it primarily as a den of prostitution.

To confront the spreading hate across communities in the country it is necessary to act at ground level. Like the massive agitation which resulted in the burning down of the resort in Uttarakhand… where a receptionist in Rishikesh was killed and the local people responded by burning down the entire resort owned by a BJP politician…

After several hours of protest, the family of a 19-year-old woman receptionist who was killed in Uttarakhand, allegedly by her employer, agreed to conduct her last rites on Sunday, 25 September.
“I am not satisfied with the provisional postmortem report. Her last rites will not be performed until we get the final detailed postmortem report,” the victim’s father had said earlier in the day.
The young woman’s body was recovered from the Chilla canal close to Rishikesh early on Saturday, six days after she went missing.
As emotions were quite heated up in the area, the local market was shut on Sunday in a show of solidarity. Ahead of her funeral in Garhwal, traders in Srinagar demanded capital punishment for the culprits.
A huge crowd of protesters blocked the Badrinath-Rishikesh highway in front of the mortuary near the base hospital where her body was taken.
Here is all you need to know about the incident and what the police investigation has revealed so far.
A 19-year-old woman went missing on Sunday, 18 September, from the Vanantra resort in Uttarakhand’s Rishikesh.
The police on Friday, 23 September, said that the accused – the owner of the resort, Pulkit Arya, the manager, Saurabh Bhaskar, and Ankit – had confessed that they killed the woman after a personal dispute, and threw her body in the Chilla Shakti Canal in Uttarakhand.
“The woman went missing 5-6 days back from Vanantra resort. That area falls under revenue police jurisdiction. A missing complaint was registered under that,” Uttarakhand DGP Ashok Kumar said

Why Was the Woman Murdered?
On 19 September, the accused lodged a missing report at the Laxman Jhula police station. The police didn’t have any leads even after three days of search.
Angered that they were not receiving any information from the police, the woman’s family and other villagers reached the district headquarters in Pauri and appealed to the District Magistrate to search for their daughter. They also demanded that the matter to be handed over the matter to the regular police. District Magistrate Dr Vijay Kumar Jogdande handed over the case to the local police on 22 September, who worked out the case within 24 hours.
Senior Superintendent of Police (SSP) Pauri Yashwant Singh Chauhan formed a team of ASP, Circle Officer Srinagar, Police Station Laxman Jhula, and Police Station Devprayag to investigate the matter.
The CCTV footage revealed that the girl had gone to Rishikesh along with resort owner Pulkit Arya, manager Saurabh Bhaskar, and Ankit alias (Pulkit) Gupta on the night of 18 September, between 8 and 9 pm.
During the interrogation, the accused admitted to the police that the whole case began with a verbal argument between Pulkit Arya and the woman. Arya told the other two accused that “the girl is upset, let us take her to Rishikesh.” Police said that the woman had been asked to develop relations with the visitors of the resort. Once they reached the Chilla canal, their argument blew up as the woman told the accused that she would expose this to the others. She allegedly threw the main accused’s phone in the water.
The three men, who were intoxicated, thrashed the woman and pushed her in the canal, police reported. Later in the night, the accused returned to the resort but without the woman, as corroborated by the resort personnel.

Attempts to Mislead Investigation
In a bid to cover up their act, the accused then tried to create a fake setup to mislead the investigation. When they were returning from the canal, they had informed the chef, Manveer, to prepare food for four people. When the chef inquired about the woman, the accused said that she was not with them and later took the food from the chef and kept it in the woman’s room.
The next morning, Pulkit Arya and Ankit Gupta left for Haridwar where Pulkit bought a new mobile and a dummy sim of the same number.
The accused urged another employee to go to the woman’s room, and that is when it became known that she was missing. The accused then filed a missing persons complaint and gave similar statements to mislead the investigation, the police reported.

‘Trying to Turn Me into a Prostitute’: WhatsApp Chats Reveal
During the investigation, the woman’s mobile chat history confirmed the allegations of her being forced into prostitution, NDTV reported on 25 September. Messages sent by her to her friend via WhatsApp showed that she was pressured to provide “special services” to guests at the resort, which she resisted, said state police chief Ashok Kumar.
“Days before she went missing, the woman had sent WhatsApp messages to her close friend sharing her ordeal,” he said.
The woman had told her friend that she was inappropriately touched by a man in the resort, but the accused men asked her to not do anything as he was drunk.
“They are trying to turn me into a prostitute,” read one of her messages.
A Facebook friend of the woman had reportedly said that his friend was killed because she refused to have sex with guests at the resort, for which she was offered 10,000. The chats also reveal that this “extra service” was provided in the guise of a spa treatment.

SIT Probe Ordered
It is to be noted that Pulkit Arya is the owner of the Vanantra Resort and the son of former state minister and now expelled Bharatiya Janata Party (BJP) leader Vinod Arya.
Vinod Arya has been removed as a member of the National Executive team of BJP’s Other Backward Classes Morcha. His second son, Ankit Arya, has been removed from the post of the vice-chairman of the state’s OBC Commission.
A Special Investigation Team (SIT) under DIG P Renuka Devi has been formed to probe the matter, Uttarakhand Chief Minister Pushkar Singh Dhami announced in a tweet.
Dhami added, “Directed all DMs to take action against all resorts that have been constructed illegally. Action was taken against the resort of the accused. We have sealed the place as forensic and other tests will take place there. But action will continue.”
Meanwhile, Uttarakhand Assembly Speaker Ritu Khanduri Bhushan wrote to CM Dhami requesting him to end the system of the revenue police with immediate effect and to set up police stations and outposts for the general police force.
‘He Is a Simple Boy’, Says Prime Accused’s Father
Vinod Arya, the father of the prime accused, on 25 September denied all allegations against Pulkit Arya and claimed that his son was innocent.
“Seedha sadha balak hai (he is a simple boy). He is only concerned about his work. I want justice for both my son Pulkit and the woman,” the accused’s father said.
“He would never indulge in such activities,” he added.
He claimed that he had resigned from the party to ensure a fair and impartial investigation in the case.
Family Questioned Demolition of Resort Which Is Under Contention
Angered by the incident, several locals from around the area allegedly vandalised the resort. Violent protests broke out around the resort with locals breaking glass panes and some trying to torch a pickle factory on its premises.
They also surrounded the police vehicle that was carrying the accused, and also thrashed them.
Meanwhile, civic authorities demolished parts of the resort saying it was built “illegally.” The woman’s family has questioned this move alleging that the demolition was carried out to destroy evidence.

‘Grave Injury Marks’: Postmortem Report
According to the postmortem draft report released by the All India Institute of Medical Sciences, Rishikesh, antemortem injuries (injuries before death) have been found on the woman’s body, suggestive of a blunt force trauma. However, further information will be revealed after a detailed postmortem report is out. “We haven’t yet received the proper postmortem report, but will hopefully receive it today,” said DIG PR Devi, SIT in charge of the case.
She added, “We visited the spot where her body was found and also visited the resort and collected evidence. We’ll ensure that the accused gets maximum punishment. Case will be taken to fast track court for speedy action.”
The Congress party has demanded that the postmortem report be made public.
(At The Quint, we are answerable only to our audience. Play an active role in shaping our journalism by becoming a member. Because the truth is worth it.)