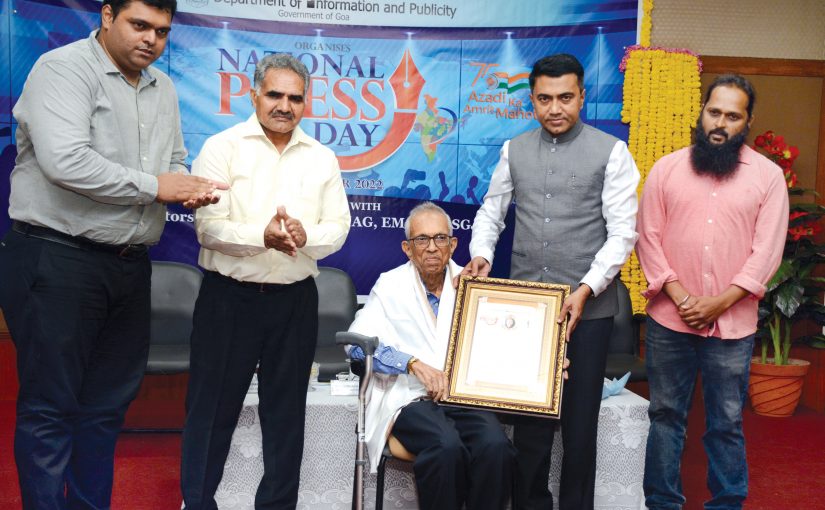 A SUITABLE BOY: The government finally found the most suitable journalist for its Lifetime Achievement Award, Cyril D’Cunha , 80 plus sports veteran who sees no evil, hears no evil and speaks no evil against the government of the day or anyone else! Everybody loves good boys! Others in the picture are Chief Minister Dr Pramod Sawant doing the honors along with DIP Director Kedar Naik, Secretary for Information and Publicity, Subhash Chandra and president of the Goa Union of Journalism Rajtilak Naik

AND a few stray thoughts for yet another Saturday. For a Saturday following the week about the confusion of Lifetime Achievement Award in Journalism awarded to me by the Goa Union of Journalists via the Goa government. For a Saturday following the week on the bust after the boom both in India and internationally. For a Saturday following the week when the International Film Festival of India in its 53rd edition will start off in the old physical format on November 20. For a Saturday following the week when in a ghastly incident a Mumbai-based food blogger Aftab Poonawala killed and chopped his partner into 35 pieces.
AND a few stray thoughts on over the confusion of Lifetime Achievement Award in Journalism to be awarded to me by the Goa government. Two Sundays back the president of the Goa Union of Journalism, Raj Tilak, called me on November 6, Sunday morning, and informed me that I have been chosen for the Lifetime Achievement award in Journalism by the Goa government. I waited for official confirmation from either GUJ or the government’s Department of Information & Publicity. Tilak himself admitted later that GUJ could only recommend a candidate and it was for the government to decide.
Rak Tilak, the baccha that he is perhaps does not understand the politics of government policies. He had the impertinence to tell me that GUJ has no authority over government awards. Which affectively amounts to a confession that GUJ is just a chamcha of the State government.
Surely any independent body or union of journalists should be able to decide whether any award should be honored or killed if it is in the case of awarding it to someone critical of the ruling party? GUJ appears to have weakly accepted the veto by the Chief Minister Pramod Sawant. We are sorry our respect for GUJ has been demolished and who should trust GUJ?
I have no issues with the Lifetime Achievement Award going to my old friend Cyril D’Cunha who is veteran sports journalists. Cyril D Cunha is the ideal candidate for the government award. Cyril Dcunha has never written against the government ever in his life. Indeed Cyril Dcunha has not spoken ill of anyone whether it is his colleagues ministers or officials. Cyril Dcunha has been a very good boy. A thorough gentlemen. A journalist in the tradition of the Navhind Times where you speak no evil, talk no evil and see no evil. The government wants only journalist like Cyril Dcunha to get the life time achievement award. What shocks me is that there was not a single protest raised by the audience of journalist who comprised people whom I had given a break and who in private attribute their career to you. What upsets me is that young Raj Tilak betrayed me and made an ass and joke of me. Put me to so much embarrassment. Raj Tilak should know enough about me and that I don’t tolerate such insults and wait for an apology at the very least.
It would appear that only chamcha of the Goa’s chief minister and journalists of his Godi media are entitled to government awards. Not surprisingly most of the awards are going to media people from the regional languages. Among the other journalists honored are editor, Dainik Herald, Rajendra Desai; Vitaldas Hegde, senior reporter from oHeraldo, senior photographer Arvind Tengtse, senior journalist Peter D’souza and former editor of Gomantak, Kishor Shet Mandrekar.
For the Goa State Photo Contest and exhibition scheme and the Goa State Journalist Awards there are awards too. Significantly, showing its pleasure, Raj Tilak gets first prize for spiritual tourism of Goa. In the category of Goan traditional occupation again Raj Tilak gets the second price. Surely there should be a rule barring the president and office holders of GUJ from competing for awards for such functions?
I apologize to my friends who have been misled about my announcing that I have got the Lifetime Achievement Award. Sadly, it was not to be. Though I may have not got such award from government, I have already got the more important people’s award. I am honored that veteran residents of Goa like psychoanalyst Sudhir Kakar, former MPT chairman Aravind Bhatikar, along with former bureaucrat Elvis Gomes and AAP president have paid moving and heartwarming tributes to me. I also thanks Susan, my former secretary at the OHeraldo, for her very loving and cheering words of solace.

BOOM & BUST
AND a few stray thoughts on the bust after the boom both in India and internationally. In the wake of the announcement by Twitter that it was sacking 7,000 jobs, Amazon, which is a major presence in India, has announced plans to layoff 10,000 people in corporate and technology jobs starting this week. The cuts will affect those working on Amazon’s voice devises like Alexia and the retail division.
Fortunately many companies in India have not resorted any such cutbacks in employment. The simple logic is that the hi tech industries in the US have expanded much to fast to be able to sustain the pace of development. Companies like the most reputed mobile phone maker Apple are affected by the shortage of chips. In fact it is curious that the shortage of chips seems to have affected chip based operations worldwide, including India.
Be prepared to wait for renewal of your debit card because the chips are in scare supply. The problem is the unavailability of silicon which is the primary raw material used in chips. If the shortage continues manufacturers of computer hardware, credit card companies and any industry using chips will be badly affected.

53RD IFFI
AND a few stray thoughts on the International Film Festival of India which is in its 53rd edition getting off to a start in the physical format. In the last two years of the lockdown period IFFI has been conducted in the hybrid mode. Which means that some films were showed over ZOOM while only a few shown to a physical audience in an auditorium.
Instead of improving infrastructure for IFFI the State government has further reduced the availability of screens. Last year and even before during the late Manohar Parrikar’s tenure it was declared that a separate complex will come up at Dona Paula and for which land has already been acquired. In the meanwhile the state government decided to undertake renovation of the Kala Academy which is bogged down in controversies. The Charles Correia Foundation objected to the modifications for the Kala Academy was designed by the late much respected architect Charles Correia.
It must be admitted that the Dinanath Mangeshkar Auditorium was unusable during the monsoon months because of leaks from ceiling to floor. But that apart the issue is if the auditorium, the largest in Goa with its capacity of 900 seats, will be ready in time for this year’s IFFI which begins this coming Sunday, November 20?

GHASTLY KILLING
AND a few stray thoughts on the ghastly incident in which a Mumbai based food blogger Aftab Poonawala killing and gruesomely chopping his live-in partner Shraddha Walkar into 35 pieces. The food blogger Aaftab reportedly was unhappy with his live-in girlfriend Shraddha and decided to get rid of her forever on May 18, 2022.
Later the gruesome story emerged with forensic experts tracing how he killer butchered the young woman’s body into pieces like meat and stored in a newly purchased fridge, to dispose of the body piece by piece in various jungle areas. He finally confessed to the Delhi police. The question that arises is what kind of a man would act in such a brutally manner and why? Is our younger generation turning increasingly to such a sick mindsets, also considering how many brutal gang rapes are taking place too with so many involving politicians or their sons or family members?