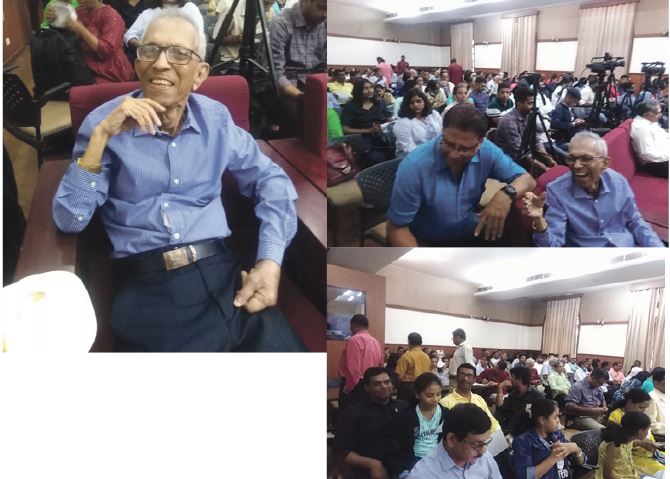 At the National Press Day Function organised by the Department of Information & Publicity (Government of Goa)…This year’s Lifetime Achievement Award goes to veteran sports journalist and editor Cyril D’Cunha. CM Dr Pramod Sawant promised a lot of goodies to the fourth estate of democracy in the near and distant future. And a glimpse of the audience…other journalists who were also felicitated for their contribution to journalism.

IT WAS National Press Day on November 16, 2022 and the media in Goa is really doing well for itself, in fact like never before. A score or more media people from across the several language and English newspapers print, online and electronic were bestowed with awards courtesy the department of Information & Publicity, Government of Goa, this year to mark 75 Azadi Ka Amrit Mahotsav.
Chief Minister Dr Pramod Sawant was all smiles as he told media people who had gathered at the Mini Hall of Institute Menezes Braganza Hall in Panaji that media does not have to be scared and least of all from him, in short, “Bivpaji garaz na!” While urging the media to keep an open mind and to write fairly without spoiling the image of Goa, he said he was more or less ready to meet all the demands put forth by the media organisations led by the Goa Union of Journalists. He noted that media coverage has changed a great deal in the last 20 years going from print to electronic and now there is social media too. In all these journalists as representatives of the Fourth Estate of democracy had an important role to play in helping the government to make the country meet the goals of “atmanirbhar Bharat.”
In exchange for being a responsible and accountable media the government was ready to help the media feel more secure and rewarded, he noted that for many journalism is not just a job but a passion. He would look into the demands made by the Goa Union of Journalists (presumably along with the Goa Editors Guild, Photo Journalists Association of Goa, Electronic Media Journalists Association, Sports Journalists Association and South Goa Journalists Association) for streamlining pension for retired journalists (currently there is a scheme granting them Rs8,500 pm but this could be further secured with a card). There would also be some ex-gratia grants for media people who meet with an injury or suffer some trauma and in the long the CM envisions Goa having a Patrakar Bhavan in the Patto district where media people could meet collectively and have rest and recreation facilities, including rooms for visiting media people.
With all these goodies on the cards the media fraternity should feel more secure and confident that the government has its interests at heart. Just work a little harder on not being nasty or controversial or having a sense of the absurd, especially when it comes to our politicians without a sense of humor, and for that matter neither has the media a sense of humor — so called godi media or not so godi media (in other words lapdog media)! Media takes itself so seriously nowadays, drunk on its own power very often and consuming freebie junk food eating all around…much to the detriment of its own good health!
On that note it’s avjo, poiteverem, selamat datang, au revoir, arrevidecci and vachun yeta here for now.