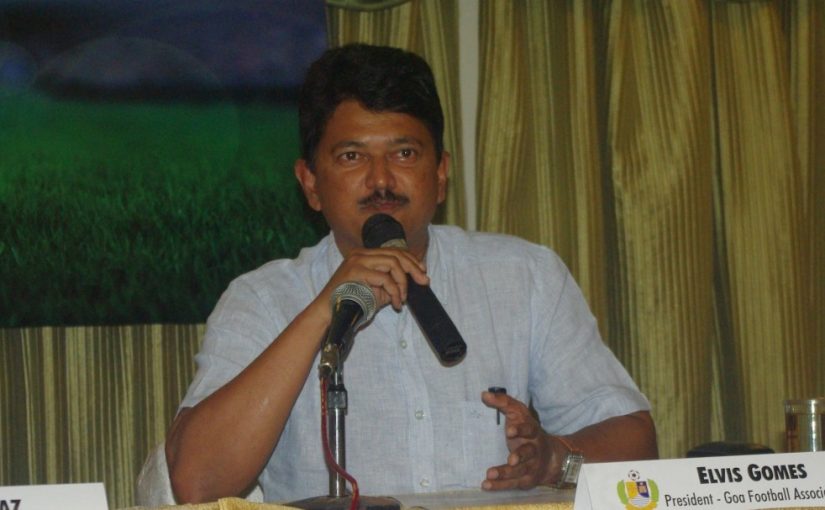 DISTINGUISHED: Elvis Gomes, who took pre-mature retirement, was Inspector General of Police when the Colvale Jail was being built; he joined the Aam Aadmi (APP) and was president of the Goa Football Association. Later, he joined the Congress party.

Though Rajan Narayan was taken out of the Goa Union of Journalist’s list of awardees, he may be assured that he continues to enjoy the respect of a lot of Goan people, including that of the former president of the Football Federation, Elvis Gomes.

AT FIRST, the two may seem incompatible. Rajan Narayan has always been a free spirit and getting to know him well, would take more than a life time! He emerged on the journalistic scene at a time when the English media was considered to be largely conformist. Goa in the 80’s was slowly getting exposed to the gaze of the corporate world and its “evil eye” on our land resource, which Rajan Narayan recognised as an existential threat to this tiny region (then as a UT, and later as a state), unless it was stopped in its tracks. Today, what RN foresaw, has largely come true, with much of Goa’s essence lost to the corporate state it has now become.
Taking on the establishment has never been an easy task. Yet RN stood out as someone who could stimulate and kindle the spirit of the otherwise “soccegado goycar” and defended the Goycarponn that he himself was immersed in. He was hated as much as he was loved. He spared none. His philosophy was to protect Goa at any cost, and the communalists saw in him a threat to their own dominance. He was ridiculed, beaten almost to death for his free-spirited writings. Though it was often felt that he was crossing the line, yet the physical attack was the worst one could imagine in our otherwise peaceful state.
RN was at his best as editor of the Portuguese-turned-English newspaper Oheraldo, at a time when democracy still allowed room for dissent. It was an era of free speech, and perhaps his management under the doyen AC Fernandes gave him the freedom to do what he did. Irresponsible governance shuddered at the prospect of getting exposed by the power that RN’s pen wielded. I wonder what he would have done if he had made his debut in present times, when much of the media has turned pro-establishment?
Leaving the newspaper Oheraldo, with which RN had become synonymous, might have been the hardest challenge for him. Yet his pen continued to fire our thinking through the pages of his own Goan Observer that persisted on taking on the powerful harming the State.
Later, as I became more acquainted with RN and Tara, I realised how difficult the path chosen by RN was. Goa certainly is indebted to RN for the role he has played in protecting the State and its people. It is befitting that the government is thinking of bestowing him with such a lifetime achievement honour, but it should not be mistaken in thinking that any award is capable of subduing Rajan Narayan. His free spirit will continue to flow like the ink in his pen as long as long as there is life left in him!