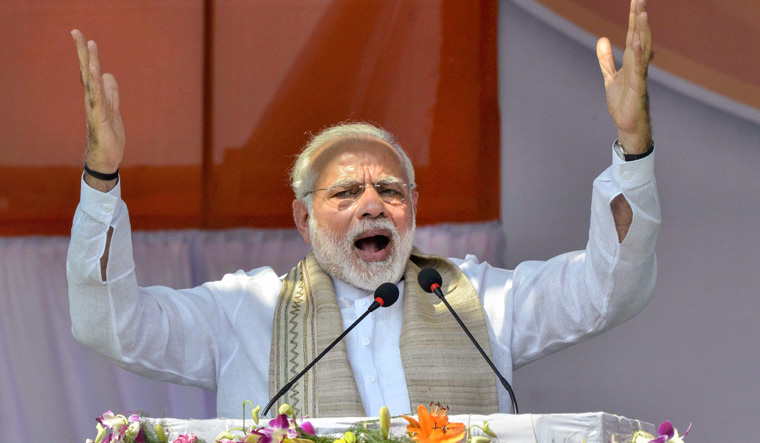 Modi gets his energy from demagoguery…

TRS leader Y. Sathish Reddy responded on Twitter that while the prime minister has ‘found a source’ of nutrition, crores in India are undernourished.
Prime Minister Narendra Modi, in an afternoon speech to Bharatiya Janata Party workers at Begumpet airport in Telangana, said he consumes up to “three kilograms” of verbal abuses every day, which he claimed in jest, converts into nutrition. The comment led Telangana Rashtra Samithi leader Y. Sathish Reddy to wryly note on Twitter that while the prime minister has “found a source” of nutrition, crores in India are undernourished.
“I was in Delhi in the morning, then in Karnataka, then in Tamil Nadu, then at night I’ll be in Andhra, and now I am in Telangana. People ask me, ‘Don’t you get tired?’ I explain to them, ‘See brother, I eat 2 kilos, 2.5 kilos or 3 kilos of verbal abuses daily…the Almighty has created me in such a way that…god has blessed me in such a way that all the verbal abuses are processed within me and are converted to nutrition,” Modi said in a speech delivered in Hindi.
Modi used the Hindi word for ‘verbal abuse,’ ‘gaali’.
Modi also took apparent potshots at the ruling TRS in Telangana, saying it has ‘betrayed’ the people and asserted the ‘lotus will bloom’ everywhere in the state, according to PTI.
Modi arrived in Telangana to dedicate to the nation a fertilizer plant at Ramagundam, besides inaugurating and laying foundation stone for multiple development projects.
After it was reported that Modi had made these comments, Y. Sathish Reddy of TRS responded on Twitter saying that while “somehow” Modi found a “source” of nutrition, “22.4 [crore] people in India are considered undernourished”.
“[O]ur rank in the GHI is 107/121. Please plan some real measure for them unlike #Bhajan & #Gaali for #Nutrition,” he wrote.
Modi also said that people in Telangana “want a government that works for all the families of Telangana instead of a single family,” indirectly referring to Chief Minister K Chandrasekhar Rao.
He further said the state government and its leaders here keep doing injustice to Telangana’s capacity and its people’s talent.
Referring to the recent Munugode bypoll, Modi said the BJP workers together forced the entire state administration to focus on a single election. The ruling party won the seat by a little over 10,000 votes.