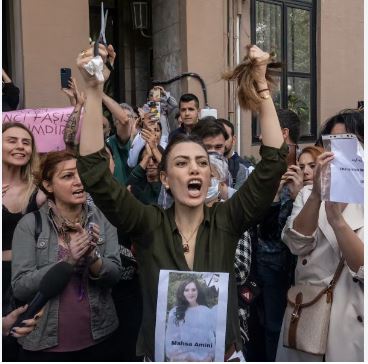 REVOLT: Iranian players refused to sing the national anthem during their match with England in sympathy with the protest back home in Iran against wearing of the hijab.

PANAJI OR UKRAINE?
AND a few stray thoughts on how Chief Minister Pramod Sawant seems to have converted Panaji into Ukraine territory for the 53rd IFFI. It may be recalled that the late Manohar Parrikar was so obsessed with converting Panaji into another Cannes for the first IFFI in 2004 that he personally supervised repairs and maintenance of the main thoroughfare roads in capital city Panaji.
In sharp contrast Goa’s present Chief Minister Pramod Sawant seems to be indifferent to how smart city Panaji looks like a bombed-out place like the war-torn Ukraine. The very honorable Mayor of Panaji Rohit Monserrate is equally indifferent about capital city’s main and inside roads and streets. It is a worst ever case scenario and nobody would believe that Panaji is a smart city by any stretch of imagination. We don’t know how many other dumb cities there are in the process of being smart cities.
Forget the other arteries of the city even Panaji’s main Campal paromenade or the formal Dayanand Bandodkar Marg down which IFFI’s main INOX complex is located is an exhibit of how to dig up roads by the utility departments of PWD, Electricity department, and other related departmentrs. Panaji is the ideal setting for shooting a war movie if anyone is interested. The utter neglect of Panaji city just before the commencement of the country’s premier film festival is an insult to the late chief minister of Goa, Manohar Parrikar. As it is the Atal Sethus has become a sight to see and no longer looks like the prestigious project it was meant to be as envisioned by the late Manohar Parrikar. All we can say is Pramod Sawant has no josh and hosh.

ST FRANCIS XAVIER EXPOSITION
AND a few stray thoughts on the forthcoming St Francis Xavier exposition coming up on December 3 onwards. Though I am an agnostic I have an affectionate bond with St Francis Xavier. When I returned from my steroids de-tox from Bangalore after my beating up incident as OHeraldo’s editor in November 1989, my weight had come down from 180 kg to 30 kg. I was feeling very week. I improved dramatically but today ironically in the autumn of my life I am back to my former equally malnourished state.
After my steroids detox I was advised to avoid writing about issues which would agitate the fragile state of my health. Since the once in a decade or decennial exposition of St Francis Xavier was imminent, I thought the best way of occupying my mind was to write a biography of St Francis Xavier. Luckily for me a friend called Laxmi from Delhi was on a vacation in Goa. She did the research for me and input the matter in my old number 280 computer.
I was quite fascinated by the story of St Francis Xavier’s life and times. What is not widely known is that Francis Xavier did not spend much time in Goa. Much of his time was spent travelling the Malabar coast amongst those engaged in pearl fishing. The Inquisition that he is accused of, that he brought it to Goa, was targeted more towards the ruling Portuguese who had become very corrupt and the Goan converts who relapsed into their original Hindu rituals.
For those who have not read my booklet on St Francis Xavier, he was an explorer and very keen on converting the people of Japan. In fact, he got Many Japanese people converted to Christianity. The ambitious Francis Xavier set his eyes on China, called the “forbidden kingdom” as outsiders were not allowed in easily. Some smugglers managed to put him on an island close to China. It is not clear whether the famous Jesuit missionary was murdered on the Chinese island. The place where his body was buried was a vein of quicklime and it is now known that quicklime has the property of absorbing water from the body. So whether the formation of the mummy was a natural phenomenon or a miracle cannot be confirmed.
Whenever I was very ill during my steroid phase my patrao, the late AC Fernandes of the OHeraldo, used to take me to the Bom Jesus Basilica for masses for my recovery. Never mind that he offered no financial assistance for the medical problems besieging me. I also had the rare privilege of being one of the pall bearers of the relics of St Francis Xavier from the basilica to the Se Cathedral on the other side of the road at Old Goa where the Bishop’s church stands. I am one of the few Hindus permitted to shoulder the relics of St Francis Xavier. Later on I was involved in making a one-hour documentary on St Francis Xavier in association with filmmaker Shamir Diniz.
While making the documentary film the most challenging part was when St Francis Xavier’s caross got lost at sea during one of his sea voyages. According to the legend a crab on a Goan beach found the cross and it was returned to St Francis Xavier. To get an acquired crab to pose for this bit of filming was a very time-consuming and difficult task. I understand that both the book and the DVD of the documentary are still available.

WORLD CUP POLITICS
AND a few stray thoughts on the ongoing World Cup Football matches in Qatar being disturbed by Islamic politics. The matches were disrupted by a protest by the Iranian players who refused to sing the Iranian national anthem. This was in support for the mass anti-hijab protests going on in Iran.
The other Islamic countries did not participate in the protest. At Qatar’s Khalifa International Stadium thousands of Iranian fans started shouting as the music accompanied the anthem played out. Meanwhile, closer home, a radical Hindutva women’s wing raised protests against love jihad. This is a first time such a protest has been raised in Goa much to the anger of Catholic and Muslim communities.
But the problem with the Catholic community is that they prefer people like me to fight their battles but do not extend any support. They are not concerned because they have enough money to migrate abroad. Indeed, an increasing number of Goans are migrating abroad. Their favorite destination seems to be Dubai which has relaxed visa formalities and is offering many incentives.

NO TAX ON IRON ORE EXPORTS
AND a few stray thoughts on Prime Minister Narendra Modi cutting the export duty on iron ore from 50% to 0%. Finally, somebody has come to the rescue of the iron ore export industry in Goa. The Prime Minister Narendra Modi, has no doubt been influenced by Srinivas Dempo, and hence the reduction of export duty on low-grade iron ore from 50% to 0%. The ore exported from Goa is low-grade ore with an iron content of less than 50%. This is in sharp contrast to ore exported from Hubli which has an iron content of over 60%. However, the reduction in export duty may not be of any help to the iron ore industry in Goa.
This is because the Supreme Court has rejected the appeal of the Goan mining companies to retain their leases. So the only option now will be auctioning of the mining leases in Goa. In any case, most of the big players in mining have quit the industry. Srinivas Dempo has sold his interest in mining to Vedanta. The Salgaocar brothers have split with the mining leases going to Shivanand Salgaocar.
The government to help the mining industry is drawing a scheme of auctioning the leases or selling the dumps. The dumps are the remains after the first lot of relatively high grade ore is exported. Beneficiation plants are coming up to sought out the rejects from ore which can be exported. The government claims there are 20 million tons in the dumps.

YUVRAJ SINGH’S HOMESTAY
AND a last stray thought on the former cricketer Yuvraj Singh who has a residence in Morjim which is being run as a homestay tourism facility but without permission from the Tourism department. Yuvraj Singh has been advertising his homestay on his Twitter handle, “I will be hosting an exclusive stay at my Goa home for a group of six only on AirNap which is an exclusive homestay destinatioin App. This is where I spend time with people I love and the home is full of memories from my years on the pitch. Bookings open from September 28, 2022.” Not surprisingly, Deputy Director of Tourism Rajesh Kale has sent a notice to Yuvraj Singh.