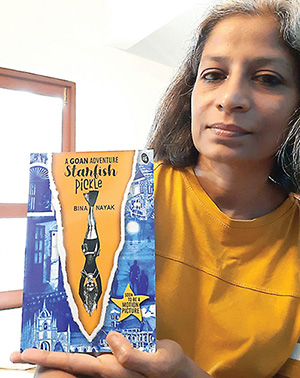 CAN’T say I have read too many novels set in Goa but this one titled A Goan Adventure, Starfish Pickle’ by Bina Nayak is so evocative of a Goa as a paradise for those frustrated or jaded with life in the countries of West, and come seeking for peace, nirvana, on the beaches of Goa, held me in thrall till the bitter sad end. This is a novel to be read and will soon make it as a motion picture one learns, good luck to it. This is fiction, very easily non-fiction in real life! Here’s an engaging story of a young woman in the unusual job of a professional diver, in love with starfish she sees underwater in her various assignments of cleaning up wreckages and drowning cases – deals with bodies in various stages of death and after death. She couldn’t salvage herself from the confusions and dilemmas of life as she became got entangled with the temptations of the seemingly good lazy life on the beaches of Goa with Goa’s so called hippie community…and pays the price for it eventually. No moral judgements here but this is one story you must catch up with. Especially if you live in Goa and even if you don’t. It is brilliant story-telling taking one into the surrealistic world of those who seek their highs on a cocktail of drugs, maybe easy come and easy go sex…for those who seek relief from the tragedies of the mind and body and heart and soul which perpetually seek re-plays in search of escape and yes, love -- like it is the holy grail or reason to live or die. It’s a lightly, well-written story that it haunts long after you have put down the book. The writer has a deft touch to charm as well as take you into her dilemmas of life past and present and future a question mark…all wrapped up a futile if inevitable tragedy even as she struggles to come to terms with it. The writer paints a cool façade with words as if nothing matters (so typical to see in privileged gen young through the ages or so to speak)! But here are wry twists and turns of thinking all of us must be familiar with in our own life at some time or another -- for this is what is called the human condition, if you are human of course. What happens to those we think live charmed lives which in the end are not so charmed after all? Find out in Bina Nayak’s incredibly poignant story of “starfish pickle.” Starfish gets into her hair while in the water, she loves starfish pickle and even provides a recipe for it at the end of her book….like it is a recipe for life but never consummated with happily ever after. She says, “Starfish in the ocean/are stars on probation, when starfish die /they become/Taras in the sky…” Of course, one weeps for her and wishes it was otherwise. But there are not many happily ever after stories in life, are there? This is a story one gets involved with and I will give it several stars as I urge you to find time to read it, so that writing like this counts for something in a world where everyone has a story to tell but few can tell it like Bina Nayak has in her own distinctive hard-hitting casual way of putting words together to hit you where it hurts the most! IN real life she is a graphic designer with 28 plus, plus years in advertising and the media business. She has worked with FCB Speer, DDB Mudra, Chaitra Leo Burnett, Ogilvy and The Walt Disney company…she confesses somewhere in her acknowledgement that this was a story waiting to see the light of day for some years – then everything fell into place most magically. A Bombay girl, she moved to Goa, and confesses, “I wasn’t sure about my writing – after being exposed to some great story telling at Disney. I felt my writing was just masturbation, and didn’t think anyone else should take pleasure from it.” Starfish Pickle’ is a debut “unputdownable” book and I will say, read it, read it, be sure to read it. Coffee-table reading this is not (there is plenty if that nowadays in our times), it is compelling reading if you’re any kind of a discerning fiction reader! The sometimes surrealistic magic weaving in and out of `Starfish Pickle’ story is mesmerising as it is memorable.
Tara Salgaonkar and her quintessential Hindu Saraswat Goan family stays in the mind long after you think you are done with them! She could well be any other young woman from Bombay or any other big metro holiday in Goa chasing dreamy, romantic highs but finding as many lows…life is not “karma sharma” she says rationally somewhere, but then again, perhaps it is considering the decision she finally takes.
After a long time, a devastating read. This is the Goa you want an insight into and here is Bina Nayak defining it so exquisitely to imbibe and think about and think it over…maybe there’s message going out somewhere in the reading of “Starfish Pickle” but all that is your reading take on it. This book should be taken up by Goa’s growing number of reading clubs and groups for reading and imbibing and moon mooning over!
—Reviewed by Tara Narayan

Excerpted from `A Goan Adventure, Starfish Pickle’ by Bina Nayak…