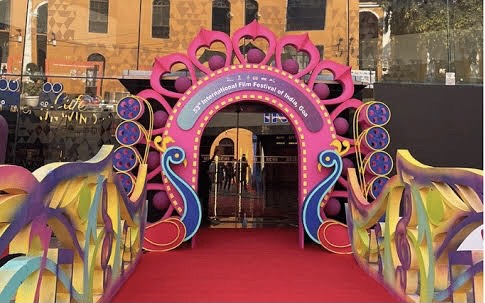 THE 53rd International Film Festival of India (IFFI) kicked off anew in at the Dr Shyama Prasad Mukherjee In-door Stadium in Bambolim with the usual glitz and glamor quota on Sunday, 20th November 2022. The inaugural ceremony was attended by Union Information & Broadcasting Minister Anurag Thakur, Governor of Goa PS Sreedharan Pillai, Chief Minister Dr Pramod Sawant and MoS for I&B L Murugan.
Amongst the filmi glamor quota were actors, Ajay Devgn, Paresh Rawal, Manoj Bajpayee, Suniel Shetty, Catherine Tresa, Varun Dhawan, Sara Ali Khan, Amruta Khanvilkar and current heartthrob Karthik Aryan who conducted the graced the opening ceremony. Earlier on before the inaugural this year the Austrian film ‘Alma and Oskar’ was screened as the opening film at all the INOX auditoriums. This was a departure from the usual mode of film after the inaugural ceremony and in fact facilitated the inaugural ceremony entertainment to continue till about 10.30 pm because there was no rush was required to see the inaugural film at the Kala Academy (which does not feature in IFFI this year for it has been under renovation for over a year now).
IFFI this year also celebrates the government of India’s 75th Azadi Ka Amrit Mahotsav initiative, Union Minister for Information Broadcasting Anurag Thakur reminded everyone. He also said that the government aims to transform IFFI as a one-stop destination for content creation, filmmaking and shooting in India amongst other related things. IFFI is not going anywhere away from Goa now that it has become a permanent venue and in the hands of the National Film Develoment Corporation of India.
The I & B minister also added, “I am sure India has all the capabilities and possibilities with trained and skilled manpower. Also, the way technology is being used in India, now we have the power to make regional content international!” Goa’s Chief Minister Dr Pramod Sawant in his address assured that Goa will have an international standard multiplex-and convention center very soon in Goa, all this is under way with final touch-ups left. IFFI will be held at the new film center by 2025, he promised.
The razzmatazz entertainment for the evening was unveiled by hosts Aparshakti Khurana and Mrunal Thakur, who tickled the audience’s funny bone with their on-stage acts; both of them have their own unique styles and this was appreciated by the audience. Aparshakti Khurrana said that the Goa vibe and IFFI integrity go hand-in-hand.
The number of delegates this year has soared touching 10,000 delegates and forcing the ESG authorities to close registration for it was full house for IFFI this year (after the Covid-19 lull). While it was Mrunal Thakur’s debut as a host, she nailed it perfectly. Talking to Goan Observer.in Mrunal said, “My favourite part of the evening was watching the opera ballet performance.”
She added, “There is so much to talk about cinema and film-making across the globe! IFFI is bringing all of it together to showcase to the world. Maybe l will be seen on-screen next year with Ishan Khattar and Priyanshu in a movie called `Pippa’ which is based on the India-Bangladesh war.

The stars honoured at IFFI 2022 inaugural…

MANY members of the film fraternity of India were felicitated with special honours. Amongst them were megastar Chiranjeevi who was awarded the Indian Film Personality of the Year Award. Veteran writer K Vijayendra Prasad, as well as actors Paresh Rawal, Ajay Devgn, Suneil Shetty and Manoj Bajpayee were all felicitated with special honours at the opening ceremony of IFFI 2022.
The Satyajit Ray Lifetime Achievement Award was conferred to Spanish film director Carlos Saura. His daughter Anna Saura accepted the award on behalf of the eminent filmmaker. A retrospective of his cinema oeuvre was showcased through a video.

What did IFFI witness this week?

THE edition of the festival brings a blend of 280 films, inviting viewers to immerse themselves in the lives, motivations and struggles of people from a total of 79 countries. Twenty-five feature films and 19 non-feature films from India have been showcased in Indian Panorama section while 183 films are a part of international programming.
France is the Spotlight country and eight films screened in the package. Reportedly this is in reciprocation of India getting the Country of Honour at the Cannes festival in France earlier this year. There were special screenings of “Chello Show–The Last Film Show” which is India’s official entry for the Oscar awards in the Best Foreign Language category.
NFDC’s Film Bazaar screened some of the finest films and filmmakers in various sections. The pavilions put up were more smart this year in line with major international markets like the Marche du Cannes. This year a total of 42 pavilions housed the film offices of various state governments, participating countries, industry players and media units from the ministry. It is also the first time that many restored classics were made available at The Viewing Room — where interested buyers could buy the rights of the listed films and screen them at film festivals across the globe.