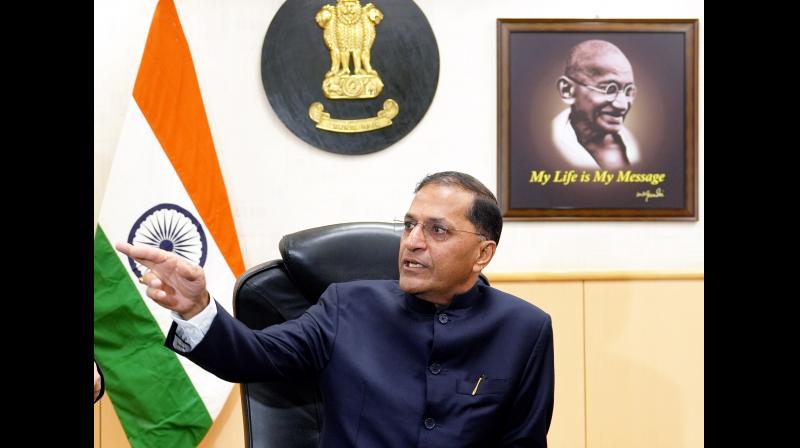 BIASED: The new candidate for the post of Election Commissioner, Arun Goel, whose appointment was rushed through, is the former cultural secretary of the government of Goa and a close confidant of Prime Minister Narendra Modi.

PM’S ELECTION COMMISSIONER
AND a few stray thoughts on Narendra Modi appointing Arun Goel, former cultural secretary and strong RSS supporter, as one of the election commissioners in an overnight decision. Historically, a big gap in the system of checks and balances, is the sole priority of the Executive to appoint election commissioners. There are three ECs with one of them being designated as the chief election commissioner.
The judiciary has been insisting for quite some time that a Supreme Court judge should be a member of the committee which selects election commissioners. After all the entire basis of the democratic system is dependent on the independence of election commissions. Ultimately it is the ECs who have wide-ranging powers to ensure that there is no corruption or misuse of money and muscle power in state and parliamentary elections.
The bitter truth is that the legislature has been increasingly trying to undermine the powers of the election commissioner. A major bone of contention is what is a defection and what is a split. In the recent case where eight Congress MLAs defected, was it a split or a defection? The person who takes the decision is the Speaker of the legislative party who is a member of the ruling party.
In an earlier case, again involving the Congress, the Speaker of the Goa assembly delayed a decision on the appeal by over one year. In the case of the judiciary it is very important to ensure that election commissioners are honest and really committed to the constitutional process. Historically, the appointment of the chief election commission is by seniority. But the appointment of the other two EC who enjoy the terms of three years is left to the government.
The present controversy has a reason and that is within 24 hours without consulting the Opposition parties or the judiciary, Arun Goel was appointed as an election commissioner. By no stretch of the imagination can Goel be considered neutral. He was secretary to the Modi government and is supposed to be the brains behind the main schemes of the government. Goel is committed to the BJP’s determination to convert Goa into a Hindu rashtra.
It is in this context that the SC has objected to his appointment as EC. Unfortunately, there are no legal remedies and we do not know if the SC can reject his appointment.
All this is seen as part of the increasing efforts to “saffronize” the country and re-write history. In Assam for instance leading Lachit Borphukan, the Ahom general, won a major victory. We would not be surprised if in Rajasthan the victory of Rana Pratap Singh is celebrated.
Similarly, even in Goa local events like the chieftain’s revolts in Cuncolim are sought to be magnified. We are sure that in the days to come we will see new versions of the history of the Kadamba empire. What is strange in the context is that government should have taken a strong objection to the commemoration of the victory of the Mahar regiment over the British Army in the Bhima Koregaon Elgar War. Presumably, under pressure by the Marathas who dominated the British Army, the Mahars were harassed.

SELECTION OF JUDGES
AND a few stray thoughts on yet another dispute that broke out between the Supreme Court and the government on the selection of SC judges. The procedure for the selection of judges to the Supreme Court is by a collegium whereby only judges can appoint and transfer judges. Unlike in the case of the other institutions, there is no check and balance on the decisions of the judiciary.
The State and Central governments can recommend the candidates to be judges. But ultimately it is for SC to accept or reject them. However, the government has the discretion as to whether to accept the decision of the judges. The Union Law Minister Kiran Ritju has questioned the validity of the collegium system. There are reports in the collegium system. The chief justice is normally appointed by the government.
In the notorious Emergency case in 1975 Indira Gandhi superseded several super judges to make somebody sympathetic to her as chief justice. Under the present system, it is possible for the Central government to pack the Supreme Court with judges committed to Hindutva. A review of the collegium system is long overdue.

JOB TAMASHA
AND a few stray thoughts on when the tamasha of so-called 7,000 jobs was being given to Goans by Pramod Sawant with Narendra Modi on a giant screen looking on at the Dr Shyama Prasad Mukerjee In-door Stadium. Recently, the State government held a function at the stadium where appointment letters were given to a few candidates from the Central department.
It is projected that Narendra Modi is offering 7,000 jobs. It will be under the impression that Narendra Modi had given 7,000 jobs to Goan candidates. This is an absolute con and the government should reveal how many Goan candidates have actually got appointment letters on that day. The same tamasha has been repeated in every State, and the actual number of jobs given to the locals is very few.
And talking about Central government jobs it is high time the head office of the Goa Division of the Post Office was shifted from Kolhapur to Goa. Most of the recruitment for the Goa Division is done in Kolhapur.

GOODBYE NDTV?
AND a few stray thoughts on Radhika and Pranoy Roy of NDTV who have resigned from the board of directors of NDTV. When they started the company they had taken a loan with the condition that the loan would be converted into shares. Now Gautam Adani has bought over the holding company RRPR which is a promoter group company of NDTV. Adani also took advantage of the clause in the loan agreement which provided for conversion of loan into equity. The consequences is that the Adanis now hold 29% of the shares in the company which earlier was owned by Radhika and Pranoy Roy. Radhika and Pranoy Roy have quit as directors and in their place are nominees of Gautam Adani.

MAYOR ROHIT MONSERRATE APOLOGISES!
AND a last stray thought on the Mayor of Panaji Rohit Monserrate finally apologizing for the horrible state of Panaji’s roads and pavements and he claimed that everything will be repaired in a few months. We hope this will be done before he finishes his one-year term as Mayor of capital city Panaji.