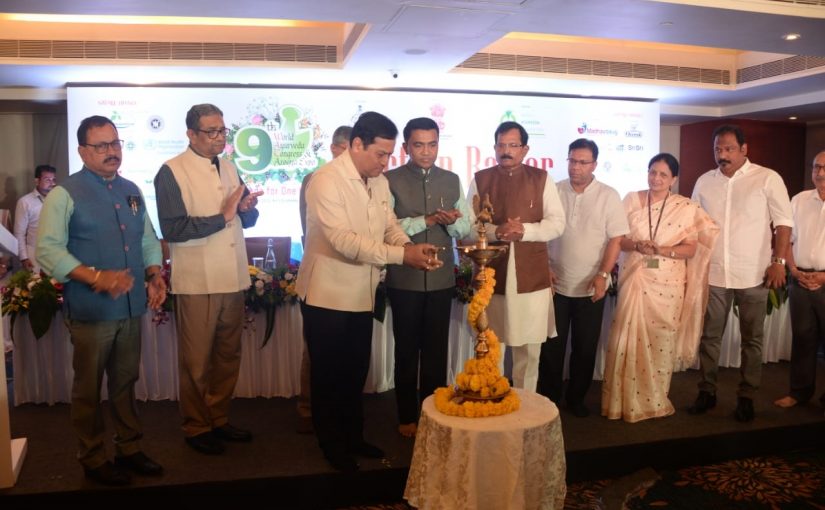 FOR AN ILLUMINATING 9TH WORLD AYURVEDA CONGRESS & AROGYA EXPO…various dignataries at the curtain raiser press conference at Goa Rajya Kar Bhavan at Altinho on November 28, expecting 5,000 delegates and visitors. The theme this year is “Har ghar Ayurveda.” The ceremonial lighting of the lamp here was initiated by Union Minister of AYUSH Sarbananda Sonowal, along with Goa Chief Minister Dr Pramod Sawant, Tourism Minister Shripad Naik and dignataries of the World Ayurveda Foundation who’re organising this expo with government of Goa from December 8 to 11, 2022 at the Kala Academy in capital city Panaji.

HEALTHCARE is more important than anything else, my dears! It is far, far more important than any entertainment, entertainment, entertainment. If only our government of the day would make it healthcare, heathcare, healthcare in triplicate instead of entertainment, entertainment, entertainment to blind you with easy come easy go glamor of the beautiful world of vanity — I couldn’t care less about it and not even IFFI, even if I love to catch the best films of the world to heal mind and body, heart and soul…that’s a tall order of course for one tries to stay sane in a constantly slipping into insane world nowadays.
Anyway, this is to say maybe there’s light at the end of the tunnel with the search for alternate ways to heal growing at exponential rate and of course everybody loves to come to Goa. If you’re following alternate ways to heal yourself of anything you must visit this grand AYUSH mega expo coming up again in Goa. I just wish capital city Panaji had better infrastructure though by way of public transport system and everything else for aam aadmi comfort!
Chief Minister Dr Pramod Sawant shared some of the details of the 9th World Ayurveda Congress and Arogya Expo taking place from December 8 to 11, 2022 and yes, at the presumably finally refurbished Kala Academy in Panaji. I’m looking forward this 9th World Ayurveda Congress & Arogya Expo being unveiled probably a visiting Prime Minister Narendra Modi or at least he will be visiting Goa to take a dekho of the new Mopa airport whatever they’re going to call it. The PM is going to say hello to the expo naturally.
Actually, Goa makes for great health seekers destination and I wish this kind of tourism all my goodwill! The government of India as you know has been pumping a great deal of money into the promotion of Ayurveda (incorporating Yoga), Unani, Siddha, Homeopathy and what else, all of which I dare say owe their roots — including excessively mainstream Allopathy — to Naturopathy. If I could be young again I would subscribe to Naturopathy more diligently, my dears!
But this is to say the CM shared some of the program and guide to the mega AYUSH expo coming up. He was speaking at the Goa Rajya Kar Bhavan, Old IPHB complex, Near Office of the Chief Electoral officer, Altinho and I must confess I got lost finding this address up at the Altinho, but found it eventually.
From the sound of it something like 37 scholars from the alternate medicine schools are expected from abroad to participate in the Ayurveda congress, altogether 4,500 plus, plus delegates including from India over. The CM said they are expecting almost a lakh of visitors and yes, there will be full-fledges OPDs for the public to consult at for their various health issues. Take your pick from Ayurveda, Yoga and Naturopathy, Unani, Siddha and Homeopathy. All this is to give medical and wellbeing tourism a big boost, said the CM. He said Prime Minister Modi us likely to inaugurating the new Institute of Ayurveda in Dhargal on December 11 at about 2pm, after which he will visit the AYUSH expo.
Present at the press conference were AYUSH Secretary Rajesh Kothecha; Ranjit Puranik (Member-Steering Committee) who confided that amongst the international experts of alternate practice they are expecting the cancer expert Jeffrey White as also modern medicine and alternate practitioner from Italy Dr Antonio Morandi, also neurologist Dr Siemenski Szymanski from Germany. As for number of delegates at least 4,611 have registered so far and more will add up as the expo gets under way. It’s the World Ayurveda Foundation and government of Goa which is together hosting this mega expo. Yes, they have also invited students and faculty from the 247 odd alternate medicine institutes in the country.
These alternate medicine expos always offer a lot of food for thought as well as real finds, so do go visit! Consultation at the various AYUSH ODPs stops will be free or at least that’s what I hear – but you may have to buy the medicines, do check dates of manufacture though. Alternate medicines have come in for a careless brief in recent years.

75th AMRIT MAHOTSAV RED CARPET ROLL-OUTS!
THE 53rd edition of the International Film Festival of India was in capital town and as with everything other government celebration this one too was part of the 75th Azadi Ka Amrit Mahotsav. Red carpets rolled, bouquets of flowers were everywhere, shawls were draped along with award trophies and enough entertainment to digest till the next one came along! In Goa I think we’re living on a sumptuous diet of festivals, celebrations, marriages, birthday parties, eating out and high nightlife out in the beach resorts…not to forget the night clubs. In liquor and drug-infested Goa so what if a few bodies are washed up in tatters on a lonely beach or on tarmac?
The general brainwashing is that the country has arrived into a five trillion or more economy. Except that I do not see it reflected around me in public life – only in the festivals bankrolled by the government of the day to throw flower petals in the eyes of its voters! We all know we’re living in a huge deficit economy, yet it’s only the people who are tightening belts and cutting corners here and there to outlive the worst of times if they can…hoping to move from kalyug to satyug one of these days.
Our politicians are ringing temple bells here, there and everywhere – I can’t think that a government which comes to power on the virtues of democracy is likely to give up its ache din easily! I am looking for light at the end of the tunnel from this week onwards and on that note it’s avjo, selamat datang, poiteverem, au revoir, arrivedecci and vachun yeta here for now.