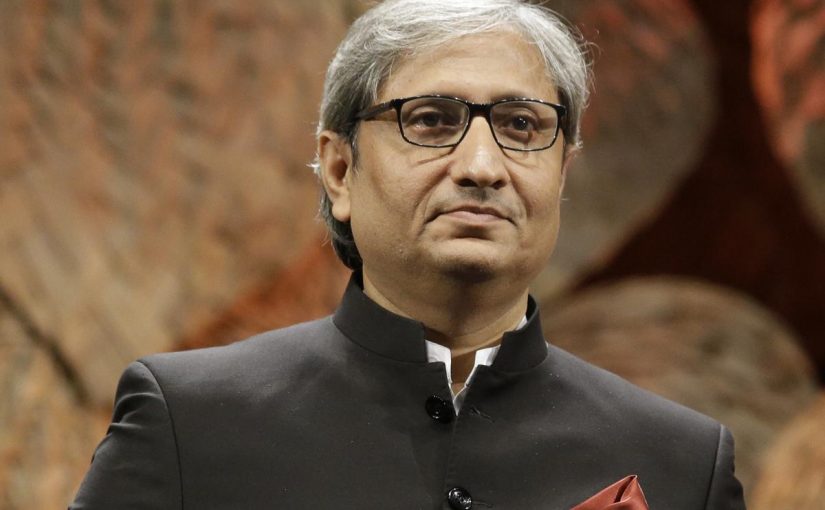 LEGEND: Ravish Kumar has become a legend as he communicated to the people in simple Hindi the sins of omission and commission of the Modi government. It is blasphemy that Gautam Adani can get Ravish Kumar to leave NDTV!

More then the exit of Prannoy and Radhika Roy, the resignation of the Magsaysay-award winner Ravish Kumar is a major blow, as he communicated in simple Hindi, the common language of the people and he has a following far beyond NDTV.

In all these years of covering elections on NDTV, I do not recall a single occasion when I was asked or even hinted to say or not say something. I disagreed with Prannoy Roy off-screen and on-screen and that was never a problem.
Ravish Kumar’s resignation confirms what everyone dreaded. This is the beginning of the end of the NDTV that we have known.
Those who know business and corporate law better than I do might disagree. They say that NDTV’s executive chairpersons Prannoy and Radhika Roy have not resigned. We are told that they have only exited from the holding company, that they continue to be the largest share-holders, and that there are many avenues open for them and NDTV. But I happen to know something about politics. No legality comes in the way if a country’s most powerful person backs its richest person. The brand name will persist, it may even flourish, but it won’t be the NDTV that we have known for three decades.
Those who know media better than I do say that the new directors appointed by chairperson of Adani group, Gautam Adani are independent journalists. I can testify that about Sanjay Pugalia, having known him for over 20 years. He is a fine journalist and by no means a Modi loyalist. That, however, only indicates that Adani’s NDTV — let us call it ANDTV — may not take a sharp U-turn. The channel may be allowed to carry its image and viewers till orders come from above. That is exactly what happened after Mukesh Ambani’s takeover of Network18.
It is a tribute to NDTV that Ravish Kumar’s resignation has drawn more popular attention than the resignation of its founders, Radhika and Prannoy Roy. Over the last few years, Ravish’s shows have become the flagship of the news channel and not just of its Hindi channel. Some time ago, I had written in this column series that “Ravish Kumar’s journalism is a testament to the travails of truth in our times.” He is an icon and with good reasons. At the same time, we cannot overlook the self confidence and vision of the Roys who they allowed a young colleague from outside their own charmed circles to reach where he did and overshadow them. This is in sharp contrast to what I call the standard Indian “jaan-doonga-jaan-loonga” model of institution building, where the founder gives his life to build an institution, keeps it under his thumb and sucks away life before his departure. Radhika and Prannoy Roy dared to be different.

Model of generosity, fairness
I clearly remember my first visit to NDTV sometime in 1993. I was at Centre for the Study of Developing Societies (CSDS) and was invited to edit a special issue on elections for the magazine Seminar. Prannoy’s book, (co-authored with Ashok Lahiri and David Butler) A Compendium on Indian Elections, had already inspired me to step out of the esoteric world of political philosophy and write a few pieces on what is now called psephology. I was keen to do an interview with Prannoy Roy for the special issue. Tejbir Singh, the editor of Seminar and another fine specimen of the truly liberal elite that I was beginning to discover in Delhi, picked the phone and fixed an appointment with Prannoy with an ease that amazed me. And there we were in the W Block, Greater Kailash office of the NDTV. It was a fan boy moment for me. I don’t remember much about the interview. All I can recall is his offer of Chinese tea (I didn’t know such a thing existed) as an option and the attentiveness with which he responded to a young nobody that I was.
Over the years, I have had the fortune of being at the receiving end of Prannoy’s warmth. I can never forget the election counting day in 1996. I had made an exit poll-based forecast for Doordarshan. For some reason, this exercise was seen and presented as a rival to Prannoy Roy, the king of election forecasting. On the counting day, Karnataka was among the first few states to report trends and we were wrong there — perhaps the only major state where we were off. The late Jaipal Reddy, ever ready with his one-liners, said, “exit poll ki pol khul gayi”. Prannoy could have joined him in this debunking, quietly encouraged him with a smirk or just let him be. I wasn’t there to defend our forecast. But Prannoy stopped Jaipal Reddy in his tracks, firmly requested him to desist from a premature judgment and provided evidence from other states to show how good our forecast was. That’s Prannoy Roy for you: a model of generosity, fairness and grace.
Radhika and Prannoy Roy turned these personal virtues into institutional values. Over the last three decades, I have seen NDTV both as an outsider and an almost-insider. I have been a consumer of its news right from the World This Week days. I had the privilege to work with its famous election team. In between I worked with its competitors (first Aaj Tak and then CNN-IBN). Of late, I have also been the subject of its news coverage. Fairness and editorial independence have been the hallmark of NDTV. In all these years of covering the most sensitive political event, namely elections, I do not recall a single occasion when I was asked or even hinted to say or not say something. I disagreed with Prannoy off-screen and on-screen and that was never a problem. When we failed to forecast NDA defeat in 2004, Prannoy came out from the studio and announced to the entire newsroom that he made a mistake in not heeding to my reading of the survey evidence. I cannot image any proprietor, editor or even an academic doing this.

Elite, professional, defender of democratic India
When I say Radhika and Prannoy Roy, it is not a facile nod to Mrs. Roy. If Prannoy has been the face and the voice of the news channel, I saw Radhika Roy as its brain and spirit. I write less about her because my engagement with NDTV was mainly with its election team headed by Prannoy. Radhika Roy is widely credited for the professionalism, so sorely missing from Indian institutions, that marked NDTV. Besides its editorial line, NDTV has been an exemplar of high production values. It is among the few TV channels that understood the value of visuals and graphics. It is only at NDTV that you could be in a studio with all women crew including camerapersons on the floor and producers in the backroom. That must count as rare achievement in the all-male culture of the Indian media. But above all, what I cherish about the institution is the work culture of its non-editorial staff. Something that speaks volumes about the core organisational values. They carried it like a badge of honour: the driver who navigated the vehicle with poise, the office attendant who was courteous but not craven. And the cleaner who was always dressed appropriately and was used to being treated with dignity.
Yes, NDTV was as elitist and anglicised as it could get, overpopulated with the children of India’s who’s who. Rank outsiders like Ravish and I, who got an entry into this club, watched it with resentment and amusement. But it was an elite that could not take its merit for granted, that consciously bore the responsibility to be the carrier of the best in their civilisation. Above all, it was an elite who stood up to defend the constitution that its forefathers crafted, and who was willing to pay a price for defending the idea of a democratic and secular India. Will ANDTV carry this legacy forward? Is this question even worth asking?
Yogendra Yadav is among the founders of Jai Kisan Andolan and Swaraj India. Views are personal.