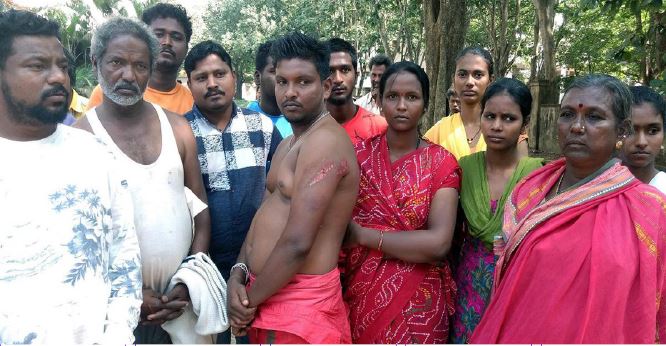 The Kannadiga people who have settled in Goa must choose between the Mhadei waters being diverted to Karnataka, or retained for the use of Goans who themselves face a water shortage. We only hope this will not become yet another local-bhaile issue.

AND a few stray thoughts for yet another Saturday. For a Saturday following the week when the Kannadiga people in Goa are in trouble. For a Saturday following the week when Gauri Malkarnekar has pointed out that Goa has planned to construct 61 dams across the Mhadei River of which only two are ready. For a Saturday following the week when a war has broken out between BJP governors and chief ministers of Congress ruled states, including Goa. For a Saturday following the week when Goans are increasingly using the mundkarial land allotted to them to build dormitories to accommodate migrants pouring into Goa, mundkar are now their own bhatkar. For a Saturday following the week when there is no safety certification for water sports activities including paragliding on Goan beaches.
AND a few stray thoughts on when the Kannadiga people in Goa are in trouble. A lot of Kannadigas in Goa are settled in Goa for more than 20 or 30 years. By the domicile rule which stipulates 15 years of residence, they are doubly qualified. Goa has also offered more jobs to the Kannadiga people in neighboring taluka like Belgaum in Karnataka which is having landlord problems with Maharashtra.
The issue is what should the long settled goals in Goa be? To whom do Kannadiga settled in Goa give their loyalty? Should they join the huge protests happening in Goa against the ruthless and illegal diversion of the headwaters of the Mhadei waters in Karnataka so that the Mandovi further down dies a slow death for Goans? Should Kannadiga Goans support Karnataka where they may still have families and homes?
What will Kannadigas do if Goans decide to extern or chase them out of Goa? Personally, I have always believe that your loyalty should not be to the place of one’s birth but the state where one lives and which has given you your job, education, medical facilities, and other infrastructure to live and raise a family with dignity.

WHOSE THIRST FIRST?
IF the river Mhadei waters are diverted to quench the thirst of people of Karnataka, will Karnataka send tankers of drinking water to Kannadigas in Goa? Which is why the Goa Revolutionary party president Manoj Porab has been clever enough to support Karnataka in the Mhadei water dispute. This is because St Andre, which was a majority Catholic constituency, has now been reduced to being a Kannadiga migrant workers constituency. A large group of Karnataka built a huge complex of buildings even along the river side in violation of Goa the CRZ.
The Catholics, interestingly, migrated to France, thanks to Fr Filipino Rebello for the many contacts with the church there. The Catholics migrated and became the minority in the constituency. Their place was taken by the migrant laborers who voted the late Vishnu Wagh to power for the first time from St Andre.
The Kannadigas in Goa have a problem. When the states were reorganized several villages including Belgaum went to Karnataka in 1956. Maharashtra was furious as the majority of the population of Belgaum were Marathi speaking. Even now there are more Maharashtrians in Belgaum then Kannadigas. Though the Kannadiga government has promoted the culture of Belgaum and even set up a separate legislative assembly. War has broken out between Maharashtra and Belgaum. Whose side will the Kannadigas in Goa take?

FATE OF MANDOVI!
FOR a Saturday following the week when TOI correspondent Gauri Malkarnekar pointed out that Goa had planned to construct 61 dams across the Mhadei river of which only two are ready. The revelation by Gauri that Goa had 61 dams planned as far back as 1999 to utilize the Mhadei waters is enlightening. Of these proposed dams only two were completed. As per the 1999 master plan Goa is a water deficit state. Against the projected water requirement of 2,674 Mcum (million cubic meters) by 2051, the actual water available in the Mhadei basin is only 1531Mcum. The 1,532M includes the entire 75% dependable water generated in the upper reaches of the basin. Goa has not been unreasonable.
The late Manohar Parrikar had promised 6Mcum which is the estimated amount needed by way of potable or drinking water to Hubli and Dharwad. But Karnataka has taken full advantage of the current double-engine government in Goa and Karnataka to divert huge quantities of water to the Malaprabha basin for sugarcane farmers, sugarcane being a crop which guzzles a lot of water.
The fate of the Mandovi river and the diversion of its headwaters in the Mhadei river which arises in the forested hills of the Western Ghats in Karnataka now lies with the Supreme Court. The SC has issued a notice to Karnataka over the diversion of water. In the meanwhile, in an extraordinary show of unity, Goa’s people and Opposition parties have come together to oppose the diversion if Mhadei’s water to Karnataka.

WAR OF GOVERNORS
AND a few stray thoughts on when war broke out between BJP governors and the chief ministers of Congress ruled states, including in Goa. Goa’s Governor Sreedharan Pillai’s address in the legislative assembly on Monday, January 16, ignored the Opposition parties call for a discussion on the Mhadei river waters diversion issue. Naturally after the clamor in the well of the house the entire Opposition staged a walk-out, claiming that the governor was functioning on behalf of the BJP and not the government of Goa.
Traditionally, the Governor’s address at the beginning of every budget session is expected to discuss the development plans of the state. Though it is called the governor’s address it is actually the statement of the government. So the governor has no right to make any changes in his address and he has to read the address written for him like a good boy. Significantly showing the collusion within the BJP and the governor to keep the Mhadei diversion out of discussion.

MUNDKAR ARE BHATKAR
AND a few stray thoughts when Goans are increasingly using their mundkarial land allotted to them to build dormitories for migrant workers and families and now have become bhatkar in their own right. The new slums have become middle-class resident areas. We are referring to Merces, Santa Cruz and Chimbel.
New waves of migrants are spreading all over Goa, including capital city Panaji. Anyone who some extra land is building a few tenements renting them out for Rs,3,000 to Rs5,000 a month. They are not concerned how many migrant residents stay chok-a-blok in the squalid rented spaces where entire kitchen is set up and where they sleep on the floor.
This kind of floor dormitory living is not unique because I understand that in Ukraine similar accommodation is being created. The economy has collapsed so a large numbers of displaced and homeless poor Ukrainians hire a room or a flat in which 10 to 15 of them stay like a family or community. They do their own cooking and sleep together in allotted spaces.
They do not contribute anything to the local economy, unlike the casual workers who meet the requirements of shops who hire their wives to sweep, swab and clean office or home premises – maid servants are in great demand in Goa.

DEADLY WATER SPORTS
AND a last stray thought on what happens when there is no safety certification for the number of water sports being permitted in Goa, like paragliding. When the Germans tourists, 84-year-old Dieter Eichler with his wife Brunhild, came for a holiday to Goa and on November 15 last and stayed at the Taj Aguada. On January 14 just before they were scheduled to return to Germany they went for a walk down Colva beach and got persuaded to do a spot of paragliding.
They had no idea on what a tragic note this paragliding. Reportedly, due to some wind disturbances the paragliding runners had to do an emergency landing on the each and during this process the Dieter lost his five fingers and suffered hand injuries. The couple had to be rushed to the GMC to be taken care of and pathed up but they won’t forget their macabre holiday in Goa in a hurry.
A simple walk down the popular southern Goa Colva beach for Dieter and his wife Brunhild landed them in a bizarre and unexpected incident while paragliding. Clearly, the paragliding outfit although it has a license from the Tourism department doesn’t know how to handle emergency landings or how to save their passengers either. It is high time the tourism authorities took a close look at the sporting activities on the beaches of Goa and screened them for safety an emergency incidents like this latest one.
Tragedies also happen at Dona Paula where youngsters like to go for fast speedboat riding in the waters off the beach. Many hotels have converted fishing boats into cruise boats. They are very flimsy, have no licenses and are very dangerous.