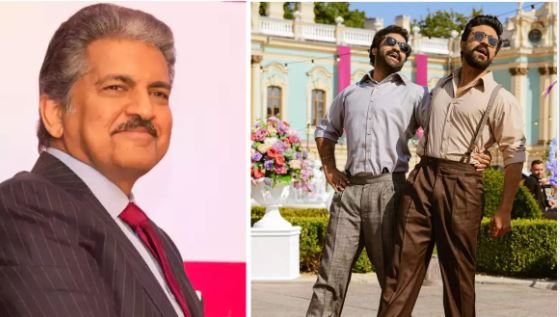 As India celebrates a Golden Globe award for the ‘Naatu Naatu’, businessman Anand Mahindra has shared a clip where the classic comedy duo Laurel and Hardy is seen to be dancing to the humming song. The steps go so seamlessly with the tune that it is hard to imagine it is just an edited clip. Hashtagging it as Friday Feeling, the businessman exclaims that the duo’s energy might be on the lower side but ‘they’re not bad’
No one is immune from the catchiness of Naatu Naatu. Not even inhabitants of the past, Mahindra shares on Twitter.
Naatu Naatu”, the irrepressible, fun track from the blockbuster “RRR”, danced its way to a Golden Globe as the ‘best original song-motion picture’ — and to Indian showbiz history — at a star spangled awards ceremony here.
The song, which beat the likes of numbers by Taylor Swift, Rihanna and Lady Gaga, to win the coveted award is the first time an Indian production has won a Golden Globe.
Organised by the Hollywood Foreign Press Association, the prestigious awards, which mark the beginning of the Hollywood season that ends with the Oscars in March, were presented here on Tuesday night.
“RRR” had also been nominated in the ‘best picture-non English’ category and lost out to Argentina’s historical drama “Argentina, 1985″.
The track has been composed by veteran music director MM Keeravaani and voiced by singers Kala Bhairava and Rahul Sipligunj.
Keeravaani thanked director S S Rajamouli for his “vision” as he accepted the award. “It has been an age-old practice to say that this award actually belongs to someone else. So I was planning to not say those words when I get an award like this, but I’m sorry to say that I’m going to repeat the tradition because I mean my words.
“This award belongs to, in order of priority, my brother and the director of the movie, SS Rajamouli for his vision. I thank him for this constant trust in my work and support,” Keeravaani said.