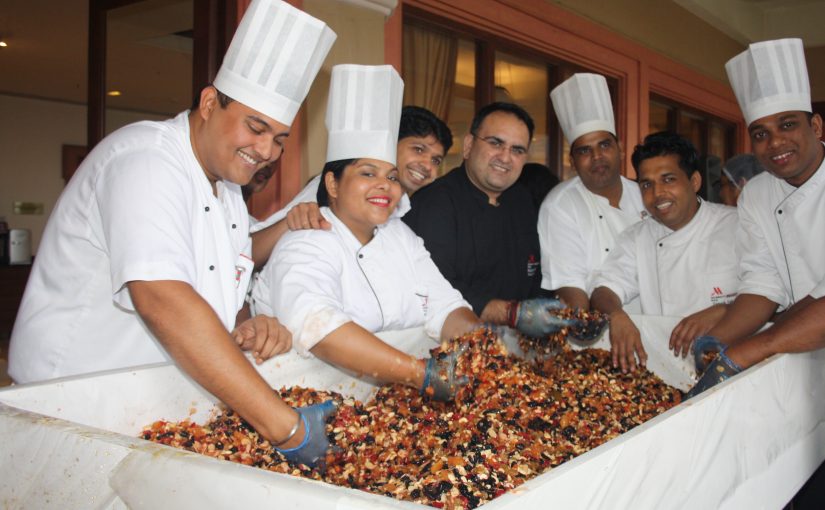 RAIN in October is rare, but the good season begins come rain or shine, for all the blessings it brings or takes away. Too many things are happening with the countdown to year-end festivities revving up. It was one more time at the Goa Marriott Resort to catch the cake-mixing ceremony with staff and guests.

It was bottoms up for bottles of liquor – whiskey, brandy, rum –  some of my favourite chefs – Anupam Gulati and patisserie’s Samantha who still can’t make up her mind whether to get married or not. I won’t advise this. At one time I thought it was okay for a woman to get married for a couple of years at a time. I was that naïve. No longer. But you have my good wishes, Samantha!

Finally came the mixing ceremony, which is good workout generally speaking. Watching from the sidelines, I inhaled deeply. What heavenly whiffs of liquor embedded with spices in the air, a real intoxicating high! Marriott staff Abhay said there are scents and scents, and some can also give one a headache. True.

The hotel lobby and lawns by the riverside were wild and stormy with a cold drizzle of rain, like the monsoon was having a hard time saying good-bye. But guests were in the pool. It’s a familiar riverside landscape of mixed blues, greys, whites, cool, wet, cold outside, warm, fragrant, cheerful inside or rather within me.

I was holding out my hand to so-and-so and so-and-so pleading for some cake mixture to pop into my mouth. “Why can’t we eat this just like this? It’s delicious as it is.” Sure, one chef responded with a smile, how much of it could I eat before getting inebriated. It’s a long time since I’ve been drunk.

Samantha said it’s good to see the hubby with me, and I tell her that he always considers coming “to eat some cake” if I tell him she will be there. It’s routine now. Are you coming with me? He’ll get ready and at the last minute say, ‘You go, I’m staying at home!’ Then I’ll say something nasty and he’ll say, “Oh okay, let’s go!”

Is it always a challenge for other wives to get their hubbies to step out after office hours for some rest and recreation and a bit of fun to forget life’s grim realities? Increasingly I’m beginning to think that we end up mothering men more than anything else!

A high tea party usually follows the cake mixing and glasses of a pretty pink mocktails were doing the rounds – some berry, lemon basil, cardamom infusion. Delicious! I saw one little one drinking hers up most enthusiastically. Children are eminently more watchable than adults.

There were all kinds of goodies including sandwiches, assorted waffles, cheese platter/cream crackers; the best cocktail samosa-mint chutney this side of town. The hubby – who usually walks with me to check out what is vegetarian and what is not (because he can never tell and he’s a more shudh vegetarian than I am) – is delighted to see the cocktail samosa and says, “Put some three or four pieces on my plate, and some cake, and that’s my dinner, okay?” Okay, I said.

I’m always happy never to go home and cook! Someone was going around with pretty looking whisky sour glasses and I reached out for one, not that I’m a whisky sour woman. More like a gin and tonic or dry tart-sweet wine woman, but my drinking days are more or less over.

During idle chatter with chef Samantha, I ask how much booze goes into the cake mix. The usual, she said, “Usually, rum is 50 per cent, and whisky and brandy 25 per cent each. The mixture is stored and left to steep and mature. It is then used as required in Christmas cakes and pudding.” The Marriott is usually the first to set the ball rolling, followed by other five-star hotels – Grand Hyatt Goa, Taj Vivanta, Park Hyatt Goa, Radisson Blu and others. The five-star list in Goa is getting longer and sometimes the smaller properties have their own cake-mixing ceremonies, seeing how Goa is the Christmas/New Year state of India.

Cake-mixing ceremonies are an age-old tradition in Christendom and rituals date back to the 17th century in Europe. It coincides with the autumn harvest, and is supposed to make hard-working folk relax and feel secure with a feeling of mellow fruitfulness and misty weather, joy and camaraderie to all near and far.

Do you know that apart from liquor of all kind, one may also pour in fresh juices and honey into fruit cake mixes? That’s because 100 years ago there was no industrialised sugar, only wild honey, jaggery made from beets/dates/palm nectar juices, and maple syrup. All things natural, organic, eco-friendly and that makes it divine to this day.

Shun refined sugar, refined salt, refined flours, refined fats and you’ll feel reborn in three to six months! But how difficult it has become to shun these big four industrial ingredients of more death than life. Think about it, my friends, and do what it takes to get back more or less to square one of the original good life! Many young folk I know are doing exactly this. It’s the older generation, my generation, that is having a tough time.