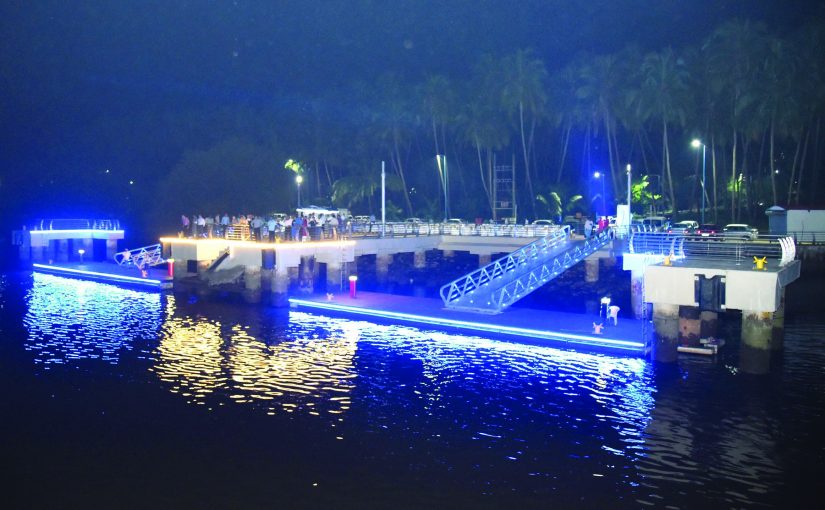 OLD GOA JETTY GETS A `70 CRORE MAKEOVER! GSIDC’s newest showpiece is a floating jetty said to be the only one of its kind in India. On October 19, the GSIDC hosted its 100+ staff, Panjim counsellors, friends and media to a boat ride up the Mandovi for a dekho, followed by dinner and music. GSIDC bosses Sanjit Rodrigues, Dr Pramod Sawant and Siddharth Kuncalienkar said it would serve as a template for other jetties to aid river transportation in Goa

THE local court at Canacona has ordered the registration of an FIR in the case of the death of a 22-year-old Finnish/Swedish national Felix Dahi. Felix’ body was found in suspicious circumstance on January 29, 2015, in Patnem in south Goa.

He had come to Goa to holiday in October 2014. It was reported that he went missing from Mini Goa restaurant in Patnem, only four hours before his body was found on a quiet road 200 metres from the restaurant. A local saw his body lying in front of her house at 5.30am on January 28, 2015 and called the police. He had five marks on the back of his head, broken skull and severe brain damage.

Canacona police, having jurisdiction of the crime spot, conducted investigations through inquest proceedings U/s 174 of CrPC without registering any FIR and then filed the case as a natural death! They reported that Felix fell on the gravel road and hit his head! But a Finnish doctor performing the second autopsy concluded that it was impossible to get the damage seen by falling. Furthermore, he had an excessive amount of an over-the-counter antihistamine, pheniramine, in his body. Overdose of this medication has mental and physical effects, such as dizziness, perturbed vision and mental confusion. An American forensic pathologist contacted by Felix’s family estimated that his death was the result of an assault by one or several people several hours before his body was found.

The investigation was concluded by the police in February 2015. But they did not close the case. Despite repeated requests by Felix’s mother Mrs Minna Pirhonen from Finland, through emails and telephonic conversations, no attention was paid to recording the FIR and conducting a proper investigation. They filed the death as an accident.

The mother conducted her own inquiry and found that Felix had a fight in Patnem the previous night with a young martial arts expert and was taken by the police to Agonda where he lived. The next day he had wounds and kept asking people if somebody was going to kill him. This has been documented in the investigation by local police in Goa. Further documentation exists.

During Felix’s last evening, a local from Agonda took him to see a doctor, after which the man drove him to Mini Goa restaurant. After that, it was said that Felix ran away and the local followed him by car, but later said he could not be found. Thereafter, the man returned to Agonda to demand Felix’s computer worth `1.4 lakh from the restaurant and which had been kept and used by staff and guests. The said man has a history of violence.

According to the family, Felix’s wounds and the circumstances around his death did not point to an accident. In February 2016, when they saw no improvement in the case, his mother hired Singhania & Co, a legal services firm from Mumbai, and started writing letters to the various authorities in India right from senior police officials in Goa to the Ministry of Home Affairs.

After intense deliberations with the authorities, the advocates reached out to the Finnish embassy for support and intervention. The Embassy called its Counsel General to watch the proceedings at Canacona.

After convincing all levels of the enforcement authorities and after arguments by advocates Shikha Bhura and Rajdeep Lahiri from Singhania and Co, the authorised representative of Minna Pirhonen, it was left for the local Civil & Criminal Court of Canacona, to order the registration of an FIR allowing the complaint of Mrs Minna u/s 302 and to order police to file a report within a month.

I don’t know what the outcome of this letter will be but am compelled to write it to put on record that Goa has become a dangerous, violent, unsafe place for anyone to come for a holiday.

IS THE CCP A BUSINESS HOUSE?

IT’S amusing and distressing to see how our governments and municipal corporations are abdicating their primary role of governing, supervising, executing programmes to make aam aadmis lives worth living to turn into businessmen! Regarding your report on the sale of compost by the City of the Corporation of Panjim, if a civic body is spending public funds for a venture for the common good of the public, then they have no business selling the fruit of their ventures!

They are duty bound to distribute free compost and dustbins on a first-come-first-serve basis to citizens. Government employees have no business selling anything which is public property. It is the public exchequer which funds them and their projects. In a democracy we want governments and civic bodies to work individually and collectively for larger public good rather than waste their time and energy on making money, even if it is to fill up the empty public coffers which are mismanaged or through indulgence in corrupt practices for private gain.