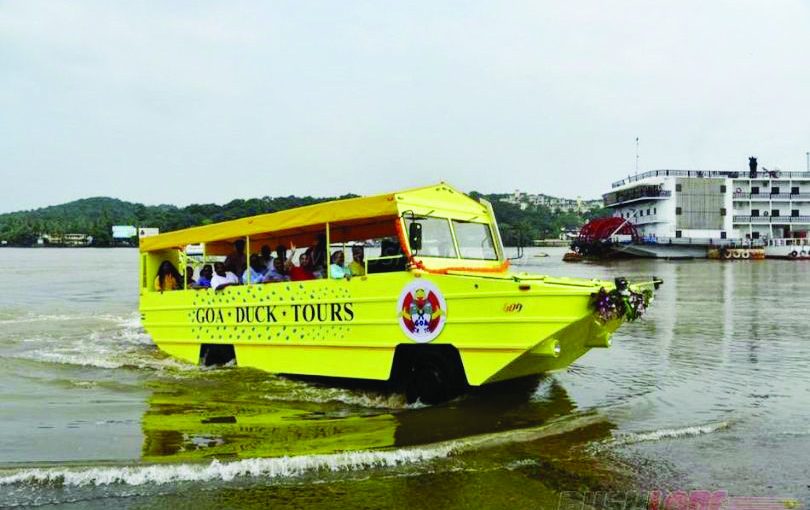 QUACK, QUACK: Goa’s latest tourism attraction is the amphibious boat call the ‘duck boat’ which can travel on both land and water

ONCE again on October 8 and that too on home ground, Fatorda, FC Goa failed to perform as expected and surrendered to FC Pune in a pathetic defeat, just like October 4 with North East United FC at Guwahati. It is not Zico’s fault alone, though he failed miserably to groom his team into a well-knit cohesive unit despite taking them to Brazil for training.

FC Goa has many flaws starting from custodian Kattimani whose recklessness was responsible in conceding at least two goals out of four. In defence, with all due respect to his past glories in World Cups for Brazil, Lucio at 38, is unfit to shoulder the responsibility appropriately. He is a pale shadow of his earlier mighty self. He has slowed down, lost his concentration and the ability to play competitive soccer.

At the half line, there was not a single maestro to orchestrate the midfield by defending and attacking. At times Romeo did this but he cannot utilise his skills full-time. In front, though Mandar showed glimpses of last season’s skills in sprinting and cleverly evading opponents, his teammates were not receptive to his tempo. Rafael is accurate in hitting the target but a bit slow while Reinaldo is a bit flimsy.

As a whole, the forward line looks like it is playing for the sake of it and not to win. They want to dribble and exchange passes even in the penalty box which is not correct. In a Portuguese Eusebian and West German Gerd Muellerian style, our boys must finish the execution when they get the ball in the box. The foreign players look tired and not spirited because they have crossed their peak.

It is not enough to play the game but also have God’s blessing, which FC Goa will never get because it is financed by the money of the sinful casino gambling business! Without God’s blessing nothing good will emerge.

AFTER a decade you have sponsored two projects for the welfare of Morjim. We appreciate your decision to renovate the Morjai Temple at around `2.70 crore. The people of Morjim had strong objections to your eco-tourism project but you ignored local grievances and started working on it.

The work to develop Morjim Khind area with a garden, park, sitting area and lighting to create proper ambience is underway. But the project is now a headache for locals as well as tourists! At 8.05pm one day, a Russian tourist met with an accident due to the ongoing work. Again, at 8.15pm a local from Morjim met with an accident at the same spot.

The area has become sticky and slippery due to excessive mud and rain water. Also, there are no street lights in this area. The 15-20 metre road is completely covered with sticky mud and puts lives in danger.

With due respect, I request your goodwill to implement the following before any tragedy occurs at Morjim Khind:

2) Install glow sign boards on both sides of the road

3) Install PWD signage with a tag “Go slow. Work is in progress”

4) Most importantly, clear the sticky mud from the Morjim Khind area

Finally, Morjim VP is good for nothing! If they have even one per cent concern towards locals, rather than waiting for Mr Parsekar to do the needful, the VP should carry out the work on top priority.

THE BJP has not spared the auspicious Dussehra day to indulge in yet another rip-off in moving the Goa State Infrastructure Development Corporation (GSIDC) office to Spaces, Patto. It is no secret that over the last four-and-half years, the GSIDC has for the BJP been an ATM (any time money) in crores! On all its multi-crore substandard works being executed, the less said the better. The Miramar-Dona Paula Road is just an example and a crying shame for all to see.

Manohar Parrikar while chief minister had dubiously leased from Nilesh Amonkar seven floors of Spaces building at Patto; ironically, adjacent to the garbage plant. The premises were leased for three years until October 31, 2016 on a monthly rent of over `40 lakhs.

For the two floors allotted to the GSIDC, the government has been shelling out a monthly rent of `8,22,159 plus taxes though the premises were unused until the GSIDC moved in just three weeks before the three-year lease expires this month.

So this cash-strapped government generously paid Amonkar almost `3 crores as rent for two floors it left vacant for 35 months. A blatant criminal waste and siphoning of public funds which ought to be investigated by the Lokayukta.

The GSIDC is moving into Spaces on the pretext that its current premises at EDC House needs to be renovated. Yet another window of opportunity for the very corrupt BJP to rake in some more crores on yet another tender towards the fag end of its very scams-tainted tenure and in preparation for the 2017 Assembly elections!