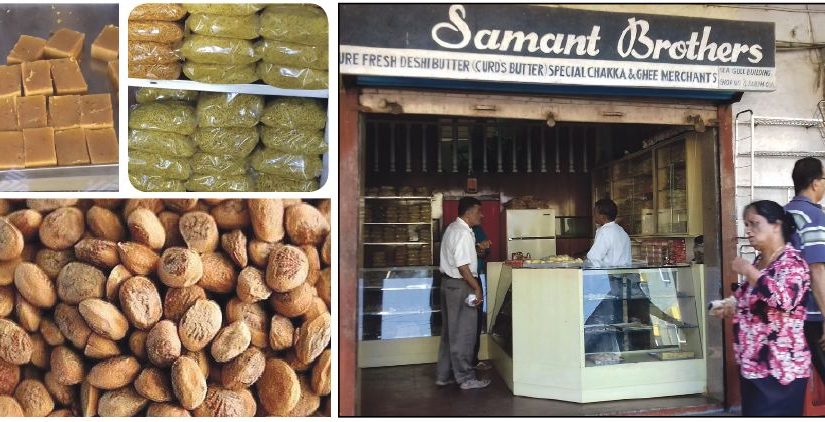 SWEETS TO SAVOUR: Samant Brothers, a traditional savories/sweets outlet near Panjim market has sold the best besan barfi among other sweets, for more than 25 years. Charoli or chironji (Indian nuts) also need to make a come-back!

I’ve been quite good this miserable Deepavali. I’ve been better than bad vis-à-vis not consuming sugar and ghee-doped mithai, unless you want to count half-a-dozen pieces of Mithai Mandir’s kesar kaju katli. I bought a quarter kilo for they were terribly expensive, at almost `1,000/kg but proved upon tasting the best among the best!

I was shunning most mava-based mithai of the north and took refuge in Goa’s doce de grao which I now consider the best mithai of all, particularly when it’s soft, gold and generously laced with cardamom. It’s actually very easy to make at home and most everybody likes it. One may add sugar judiciously of course and no ghee. No ghee, asli or nakli!

This sweet can double very easily for puran poli, a favourite in many Hindu households laced with desi ghee when made at home. I could crush all my doce de grao and make puran poli! Instead of mithai, I’ve been gifting doce de grao to friends and one of these days hope to make it at home using fine grated jaggery.

My very rich tart-tongued friend who lives half-way up a fancy mountain called to wish me. Since you’ve been writing about mithai, she asked, what’s your favourite? These days I think Mother Earth’s fresh and dried fruit is the best of all, but since she was asking (without offering) I slipped into nostalgia and thought, “Well, if I was dying and someone asked if there was any special sweet I’d like to eat by way of final wish fulfilment before saying goodbye cruel world forever…

I don’t know if one feels like eating anything if one’s on the verge of dying but if my taste buds are still intact I’d ask for Gujarat’s ancient sweet of white jalebi or a slab of desi ghee-laced white magaz (also called gundar pak), the kind made at weddings once upon a time, of semolina and stuffed with dry fruit like charoli, cardamom, almond slivers, rose petals, cardamom, pure white ghee gleaming on it.” One bite should send me off happily to Shivalok!

I don’t think anyone can make the slightly sourish white jalebi or white magaz anymore. Making it is a lost art which needs to be revived. I’m mostly intoxicated by memories of yesteryear Deepavali and these days when every day is a struggle I don’t much care how I drop dead.

The problem is one never quite drops dead unless it’s a deadly accident on unsafe Goan roads. It’s the thought of a slow lingering death which makes me shiver. It would be nice to go up to the icy mountains of Kinnaur and freeze to death in ice – after eating a fragrant golden apple! Another thing I don’t mind eating before I die – Ladakh’s golden apricots with the taste of pure sunshine in them.

Okay, no more of this post-Deepavali day dreaming, and no more mithai till next Deepavali. I should get serious and tell you something about the linkages of sugar with the state of our health although you probably know it already if you’ve been reading this column for any length of time.

I’ve been writing it for 13 years in Goa and another 15 years in Mumbai that was Bombay. The late Behram Contractor of The Afternoon Despatch & Courier got me started and after that nobody could stop me (although a few tried). This is a column with a stomach-churning history but I’ll skip it. I’m happy it’s evolved and keeps turning over a new leaf every now and again, even if I’m sick and tired of chasing food for the sublime body.

WHAT IS charoli? Old-time Indian sweets would contain this, and it has virtually disappeared today, chased out by presumably superior almonds and pistachios. In the old days, in Gujarat all my magaz white or golden (made of rich gram flour) came studded with raisins and charoli. One also found them in shrikhand and dudhpak. Charoli or chironji are generally recognised at ‘Indian nuts’ of the Buchanania lanzan tree which grows mostly in north west India. They are sometimes seen as the poor Indian’s nut because they’re more economical and their sweetish flavour is redolent of almonds.

Nutrition wise they’re not as great as almonds but they’re still full of protein, calcium, potassium, niacin rich, vitamin B1 and vitamin C. They come encased in a hard shell. Charoli comes closest to pine nuts and get rancid equally quickly, so eat them fresh. Most grocery shops stock them, unless they’ve become so abandoned in favour of other nuts from the USA!

Old world recipes used charoli nut or puree to thicken curries. Charoli and poppy seeds were favourites to thicken kurma/qorma and offer a distinct flavour. Bring charoli back in our lives!

LAST note: Why are we so obsessed by everything big these days? Big ideas, big business houses, big statues, big malls, big causes. Look carefully and you’ll see how ugly big is most often. Big is not beautiful. Small is still and will always be beautiful! All these thoughts occurred after dropping in at the three big mithaiwallahs in town – Mithai Mandir, Big Mishra Peda, Heritage Sweets – two of them recently arrived. I dropped in almost by accident at an old small favourite, Sawant Brothers, to ask if they were making their desi ghee motichur ladoo this year.

Yes, said old timers Suresh Prabhu and Kamalakant Talekar, “but in a small quantity and we sold out on the first day itself!” They complained that business dropped 40 per cent because fine folk are smitten by the big mithaiwallahs who doll themselves up extravagantly. Small mithaiwallah like them suffer. Yet their prices are humbler and quality of their fare excellent. Their desi ghee motichur is sold out every year. They also have something I haven’t seen anywhere else – besan barfi (desi ghee, `360/kg). Give it a taste. I’m giving my first prize for the best mithai in town to Sawant Bros’ besan barfi.

The small timers have time to talk to you and voluntarily offer a taste of whatever you express an interest in. Sureshbhai made me accept a wrapped soan papri chunk (desi ghee) and refused to accept payment. You won’t find this with the big timers who can be quite rude if you dither around trying to make up your mind, asking for a small taste of this or that to check on sugar or ghee!

Give me Sawant Bros any time. I usually get my khaara curry leaf boondi and besan papri from them. They sell shudh ghee at `540/kg. The butter comes from Coimbatore and they convert it into ghee. At the tail end of Deepavali I was feeling really bad. I wish I’d bought my small amounts of mithai from them. More economical, first class quality too. But see what I mean?

Small means spreading wealth at the bottom of the pyramid; big means piling it on top so that sooner or later there’s a big fall and small people suffer more. My Deepavali resolution is to get back to supporting small causes and small folk, to keep them alive and happy.

Join me, my friends. Buy from your next door kiranawallah who knows you by name, keeps track of you, cheers you up when you’re feeling blue, and not from big-time Walmarts making a grand entry into Bharatdesh!