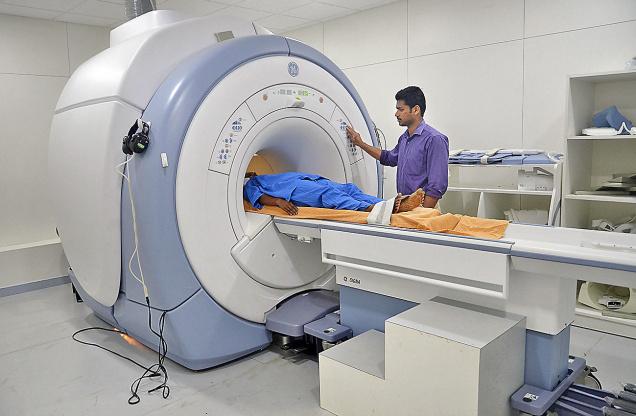 RADIOLOGY: Delays and golmaal in awarding tenders for CT scans and MIRs have resulted in huge losses according to the auditor’s report

Subsequently, on verbal directives of the health secretary in July 2011, the associate professor (in charge of ICU) re-scrutinised the bids and furnished some discrepancies in the comparative chart prepared by the Head of Department earlier. The Health Department in March 2012 instructed the GMC to retender by calling short tender notice and completing the work within two to three months.

Fresh tenders for 13 ventilators were floated in April 2012 and six were received in June. Two tenders (Life Care and Goa Surgico and Medical Agency) were shortlisted after technical scrutiny. On opening financial bids in September 2012, the lowest offer was from Life Care for the T Bird Vela model at $18,515. In January 2013, the government accorded administrative approval and expenditure sanction and issued the supply order for `2.50 crore.

In the earlier tender in July 2010, Life Care quoted for two models of ventilators at $23,185 for Avea standards and $14,275 for T-Birds Vela. Subsequently, on retendering, Life Care offered the same models at increased rates – up by $2,640 for Avea Standards and $4,240 for t-Bird Vela. In the first round, GMC considered only Avea Standards. In the second round, however, GMC considered and procured the T- Bird Vela ventilator as the lowest one meeting their requirements. Had the model been considered in the first round, GMC could have saved a total of `53.69 lakh due to a lower quote and lower exchange rate.

The lowest offer from the July tenders received in August 2010 was `3,22,625 per monitor. Instead of issuing a work order, GMC retendered monitors and ventilators in April 2012 following which  four offers were received for 13 monitors. After technical scrutiny and demonstration, the financial bids were opened four months later. Nihon Kohdon’s offer of `6,42,251 per monitor was the lowest. The government accorded AA & ES one year later and the supply order was placed. In January 2014, the company supplied the equipment and it was installed in March 2014.

On first tendering, the lowest offer received for monitors was `3,22,625 per monitor. In the second call, the lowest was `6,42.251 per monitor, showing an increase of `3,19,626 in the rate per monitor. This not only resulted in a delay in installation but also in additional expenditure of `41.55 lakh for 13 monitors.

The ventilators were installed in May 2013 but the monitors needed were installed a whole year later due to a delay in obtaining administrative approval. The ventilators installed at a cost of `1.88 crore remained under utilised for 11 months. GMC took nearly four years, from July 2010 to March 2014, to procure and install the equipment.

The GMC said the earlier tender was cancelled due to discrepancies in the comparison chart prepared by the then head of department. The delay in placing the order for monitors was caused by time taken obtaining relaxation for drawing AC bills as many others were pending settlement.

The reply was not convincing owing to the huge extra expenditure from avoidable delays, particularly as the ventilators purchased finally were the same as on offer in the first round.

THE Radiology Department at GMC proposed to procure a new CT scan machine to replace the old one to cater to an increased load of patients. A sum of `4.17 crore was earmarked out of amount allocated under the USSGMC scheme.

In June 2011, GMC floated tenders for a whole-body multislice CT scanner. Three offers were received two months later with Siemens Ltd Mumbai offering the lowest at $6,69,000. At the prevailing rate of `45.75 per USD, the total cost worked out to `3.06 crore plus `15 lakh for site preparation on a turnkey basis.

The purchase committee accepted the offer and submitted the proposal in November to the health department for AA & ES. In May the following year, the government accorded AA & ES for `4.17 crore and issued the work order. In November, the company supplied and installed the CT scanner for `3.86 crore in total.

The process between opening bids and issuing the purchase order took nearly 10 months. Though the amount sanctioned under the USSGMC scheme was available with the GMC, the government took six months to accord the AA & ES. Consequently in June 2012, Siemens revised the rate over change in the dollar exchange rate (1 USD= `55.45).

So GMC revised the supply order to `3.86 crore and paid in two installments (September and November) of `3.47 crore and `39 lakh. The inordinate delay of six months in issuing AA & ES and two months for the working order resulted in an additional expenditure of Rs 35 lakh (at the exchange rate in November 2011 (Rs 50.29).

GMC said that the delay in issue of work order was due to belated sanction of AA & ES. If exchange rates fell, the department would have benefited. However, the undue delay caused extra expense for GMC.

THE Central Sterile and Supply Development (CSSD) equipment procured/delivered in 2010 for `4.35 crore has not been utilised so far. Machine installation was delayed as GMC could not provide a suitable place to open the boxes carrying the parts. The process started in October 2010 and was completed by January 2011. All required connections were completed by the Public Works Department in March and trials were held in May 2011.

Even though a steriliser was inoperative due to damage during transportation, it was declared functional from April 2011. But the machine could not be utilised due to pending repairs for rectifying damage in transportation, wiring damage caused by rats and damaged electrical couplers. The representative of the manufacturer visited the hospital only in November 2013, after the warranty period, and suggested general maintenance, calibration and repairs.

In December that year, the company distributer submitted a quotation of `18.44 lakh for repair which was approved only in January 2015. The repair work was still pending in December 2015 for want of imported spare parts.

In January this year, the GMC stated that the CSSD was presently used partly. The equipment was expected to be fully functional within the next two months. The facts however remained that CSSD equipment worth `4.35 crore procured in April 2010 remained unutilised for the last five years.

IN JUNE 2012, the GMC procured an arthroscopy unit for `46.69 lakh, and installed it in October. Within three months, the camera got burnt due to lack of earthing in the operation theatre and had to be replaced. In July, the camera developed problems again, and on inspection in August it was found that the camera head was broken due to dropping/ misuse and therefore not covered by warranty.

After a year of pursuit, as a gesture of goodwill the supplier replaced the damaged camera head.  Two days later, the unit’s light source stopped working, and was repaired in October 2014 for `0.73 lakh. In February 2015, the camera stopped working again and needed replacement due to scratches and damage to internal parts due to either dropping or an accidental hit. The warranty ended in October 2014 and until December 2015, the GMC was yet to finalise the replacement of the camera and the AMC.

The arthroscopy unit is now being used with surgeons bringing their own camera head. In the 33 months since installation, the equipment could not be utilised for nearly 24 months due to damage on account of repeated mishandling. The GMC is forced to utilise the services of only those surgeons who can bring their own cameras.

IN FEBRUARY 2007, the GMC proposed a new morgue with a capacity of 90 bodies, with a conference display hall for good research facility for post graduate/super speciality courses and medico-legal cases. A year later the government approved the proposal and awarded work to the Goa State Infrastructure Development Corporation (GSIDC).

The GSIDC estimated the cost at `14.93 crore for a new mortuary building with 108 cabinets covering 4,146 square metre of built up area. It executed the work as 12 sub-works through 12 different contractors for `17.71 crore. The new forensic block and mortuary was inaugurated in December 2013.

During the inaugural function itself, the mortuary cabinets (cost `2.59 crore) began showing errors. The forensic department started using the mortuary cabinets, but stopped owing to failure of the cabinets. The GSIDC repaired them, but they could not be used due to non-finalisation of the technical maintenance contract for 21 months and review of the technical glitches detected by the firm.

GMC stated that the GSIDC had commissioned Morgue C with 36 cabinets and 11 cabinets in Morgue A and B in September 2015. The remaining cabinets needed repairs and would be handed over by GSIDC at the earliest. The facts, however, remained that 108 new mortuary cabinets costing `2.59 crore remained unutilised since December 2013 without achieving the intended purpose.

Excerpts for, a report by the Comptroller & Auditor General of Goa, 2015