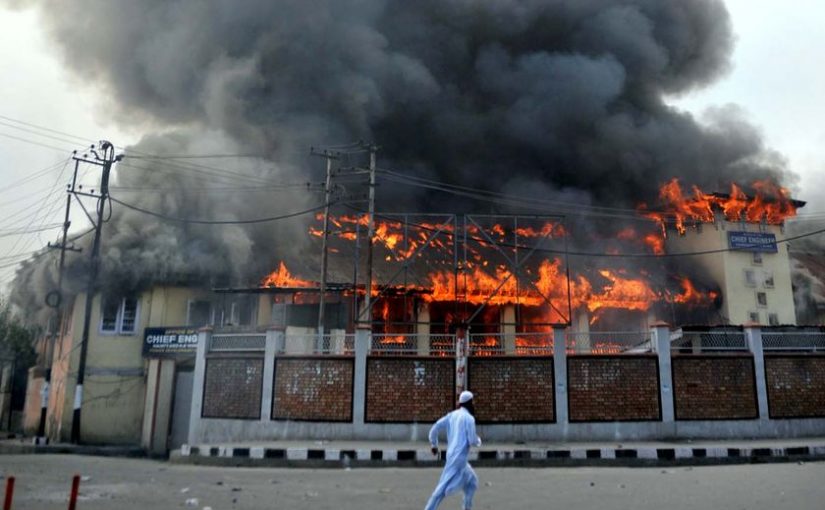 SHOCKING: More than 20 schools including those run by the Christian minority have been burnt in the state of Jammu & Kashmir in the last three months

AND a few stray thoughts on the increasing fears that one of the most powerful countries in the world, the United States, would slip into the hands of Donald Trump who has antagonised most sections of the population. His possible election is considered a disaster by most right thinking people all over the world. If the US catches a cold, everyone in the world sneezes.

By coincidence or otherwise, the dramatic change in the fortunes of the presidential hopefuls followed the re-opening of the probe into the emails of Democratic candidate Hillary Clinton, accused of using a private email server while she was secretary of state. FBI director James Comey has not claimed that there is anything in the new evidence that threatens national security, but the timing of the announcement has allowed Trump to perhaps get ahead of her. What was presumed to be a cake walk is now turning out to be a neck-to-neck contest.

PRESIDENT Barack Obama and even Republican leaders have warned that Trump is unfit to be president of the United States. Trump has been accused of inappropriate conduct towards women and on record made crass comments about them. He has been accused of being a ‘pussy grabber’.

Trump is also seen as a threat to the US’ large migrant population. He has threatened to build a wall between the US and Mexico to stop the entry of illegal migrants and has accused successive presidents of encouraging immigration at the expense of white Americans. He has accused India and China of stealing jobs. For the record, a large number of Indians work in the US software industry.

Moreover a number of large American business houses have found it cheaper and more profitable to outsource the production of high-end electronic products. Even the iconic Apple iPhone is manufactured in China.

TRUMP is threatening to change the very idea of the United States. Historically, America has been considered the land of opportunities. It began with migration from the United Kingdom, and now comprises migrants from all over the world. The world’s largest economy has prided itself on the fact that any one from anywhere in the world can come to the US and make a fortune based purely on merit. Even its current president is of African origin. The only requirement for contesting presidential elections is that the aspirant must be born in the US. Trump has even raised questions over the birth certificate of Obama who was born in Hawaii.

OBAMA was the first African American president of the US. Despite the fact that women have reached the top of the corporate ladder, not one has become president or even vice president so far, unlike corporate America where mega multinational PepsiCo is headed by Indra Nooyi, a woman of Indian origin.

Everyone is hoping that Hillary Clinton will break the glass ceiling. Unlike Trump, she is a liberal who believes that migrants must continue to be welcomed. She is committed to regularising the citizenship of millions of migrants including Indians born in the US but whose parents are considered illegal immigrants because they were not born in the US. This would prevent the separation of children and parents.

Americans are also suspicious of Trump’s praise for Russian president Vladimir Putin who is reviving the Cold War. If Trump is elected we will have an unholy trinity of dictators – Narendra Modi, Putin and Trump. Within a week the world will know whether American citizens have been foolish enough to elect Donald Trump as their leader.

AND a few stray thoughts on Goa Foundation stalling the violation of the Coastal Regulation Zone rules (CRZ) and the environmental guidelines by the Laxmikant Parsekar government. On the foundation petition, the Goa bench of the Bombay High Court has ruled that the in principle approvals by the Investment Promotion Board (IPB) do not exempt industrial and hotel projects from approvals under CRZ.

The High Court has also implied that the IPB cannot override the Town & Country Planning Act which mandates conversion of land to industrial use before permission is given to a project. Several hotel projects rejected by the CRZ authority had been cleared by the IPB, which even permitted the destruction of more than 10,000 coconut trees for setting up a distillery in Quepem at the expense of a kulaghar.

The other blow that chief minister Laxmikant Parsekar has suffered is the setting aside of renewals granted to 24 mines operated by 10 major mining companies. The Supreme Court had only given a two-year extension to old mines which had come up for renewal. The government had granted renewals without clearance from the Ministry of Environment & Forest or the Pollution Control Board. This is likely to delay the revival of the mining industry which has been the backbone of the economy.

More importantly, the clipping of the wings and unlimited power of the IPB has affected Parsekar’s fundraising efforts. The IPB had become a major source of funds for the 2017 Assembly elections scheduled for February. Several mega projects have been cleared by the IPB. It is alleged that the companies have paid huge kickbacks to the Bharatiya Janata Party (BJP) and Parsekar.

He may even have to return the amounts collected for the approvals. The BJP cannot expect major contributions from the mining industry in view of the delay in renewing the leases and the depressed market for ore. Perhaps this is why Parsekar is anxious to grant licenses to more and more off shore and on shore casinos. It may be recalled that the government has granted a license for a sixth casino in the Mandovi River owned by a notorious Congress politician.

AND a few stray observations on the difficulty of doing business in Goa. In sharp contrast to the years when India Today and other magazines rated Goa as one of the most investment-friendly states, the situation has taken a turn for the worse. The government has not even implemented reforms to ease the conduct of business suggested by their own government at the centre. Modi had come to power on the promise of removing unnecessary controls and liberating industry from the permit license raj.

Modi had initiated 340 major reforms to improve business conduct. Of this, according to union minister for Commerce Nirmala Sitharaman, the Goa government has implemented only 61. It has also not provided information on compliance on four of the reforms suggested. This confirms the report of the Associated Chamber of Commerce and Industry that the industrial climate in Goa was among the worst in the country. Goa now ranks 21 as against its pride of place during the last Congress rule.

The censure by the centre confirms industrialists’ fears at a recent seminar by Prudent Media. All three businessman on the panel, Datta Naik of CD Developers, Sriniwas Nayak  of Pride Casino and Manoj Caculo of Caculo Mall complained bitterly of the corruption and delays in getting sanctions. Industrialist Blaise Costabir who makes Shakti water tanks has confirmed that Goa’s business climate has worsened.

He pointed out that the IPB should have told the hotels’ promoters that the permissions were subject to clearance by the CRZ and other authorities. The chief minister was surely aware that the IPB act provision which empowered it to overrule other regulatory bodies would not stand the test of being challenged in the court. In retrospect, those who invested will feel cheated. It is bad enough that the power minister has refused to grant connections to the approved projects.

The strangest part is that no one seems to know the motive or the perpetrator of the school attacks. Both state and central governments have not even taken note of this, leave alone assumed responsibility.  Understandably, no terror group is claiming responsibility. The Modi government which boasts of carrying out surgical strikes against terrorists in Pakistan has not been able to stop the arson attacks.

No protection is being provided to government schools. For more than four months, children have not gone to school and it is unlikely that exams will be held. A television news channel showed students pointing out that not even 40 per cent of the syllabus had been completed. Surely the state and central governments should display a sense of urgency to find out who is behind the attacks.

In any war, it is ordinary civilians who are the worst affected. In the wake of India’s surgical strike, life has become hell for the common man on both sides of the border. India’s Border Security Force and their Pakistani counterparts have stepped up attacks. As a result, eight civilians including two minors have been killed. We do not know how many children have been killed on the other side of the border. People living in border villages have been forced to move because of heavy firing. India obviously did not expect the situation to take such a turn and claim the lives of the common people.

AND a last stray thought for yet another Saturday. The Tourism Department and the Goa Tourism Development Corporation may introduce more tourist attractions. They have already started hot air balloons and helicopter rides. The latest additions are duck boat rides and cycle parties.

But all this will not help as long as the government is unwilling to bring taxi drivers under control. In no other state does the government allow them to blackmail tourists and locals alike. Taxi drivers do not allow tourists to be transported by coaches, nor do they not allow friends or members of the family to drop and pick up guests from hotels.

A notification was issued making metres compulsory in December 2015 by amending Rule 140 of the Motor Vehicles Act. The deadline for installing metres was postponed to April 1, 2016. Since taxi owners objected, it was further deferred to November 1, 2016. There is still no sign of the Transport Department implementing the High Court directive on metres.

In the absence of metres, taxis can charge whatever they want. The fare from the airport to Panjim is `800, double that in Bombay and Bangalore for the same distance. The reason why domestic tourists bring their own vehicles to Goa is because cost of transport is higher than the cost of hotel accommodation here. The Tourism Department may create more attractions but tourists cannot take advantage of these because they cannot afford the taxi fare.