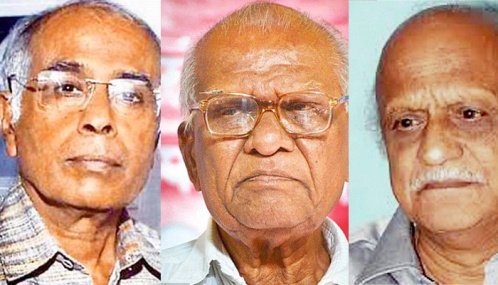 Dakshinayan Abhiyan, an initiative taken by Padma Shri Dr Ganesh Devy, is organising a convention to bring rationalist and liberals together to preserve the freedom of speech and thought guaranteed by the constitution. The convenor of the three-day convention starting Friday, November 18 is social activist Datta Nayak. Among the eminent delegates will be the family members of the three rationalists murdered by fundamentalist elements and noted RTI activist Prashant Bushan

ALL is not lost – yet. There are enough people at the top, middle and bottom echelons of our multiracial, multi-religious, multicultural society to warm the heart and keep the flame of democracy alive. Enough regrettable things have happened in recent years to make smart people pause in disquietude, memories of the lessons of history abroad and at home flooding the mind. One stout defender of freedom of speech and equality in pursuit of happiness for all is quiet author and linguistics professor Dr Ganesh Devy.

Dr Devy was in Panjim to contribute towards the final touches of the forthcoming mega conference – Abhivyakti: Dakshinayan Rasthriya Parishad scheduled at Ravindra Bhavan, Margao from November 18-20. It will witness a host of literary and intellectual personalities speaking on coming together in solidarity in the face of political tyranny. Dakshinayan Abhiyan has been formed by various authors and like-minded people in Goa supporting the cause of right to freedom of speech.

Dr Devy, now based in Dharwad, has seen life and times in Gujarat as a professor of English at the Maharaja Sayajirao University. Apart being a linguistics scholar with several books to his credit, he is a critic and activist and founder-director of Bhasha Research & Publications Center, Vadodara. Along with many others, he returned his Sahitya Academy Award last year to protest the cold-blooded killing of intellectuals and rationalists in India.

At a media meet in Panjim recently, Dr Ganesh Devy said that the climate in India has become such that people are living in fear. This does not auger well for the country. Perhaps if like-minded people come together to express their feelings and thoughts it could be a catalyst, a positive force. He rued the fact that those who speak in the late Mahatma Gandhi’s name have actually turned Gujarat into the very antithesis of what Gandhiji valued the most. In his opinion, “Gujarat is no longer Mahatma Gandhi’s Gujarat.” Today’s Gujarat is a ghetto state with large sections living fearfully in “allotted” areas. It is not in the interests of the rest of India to become like Gujarat!

He hoped the forthcoming Abhivyakti: Dakshinayan Rashtriya Parishad will prove to be an initiative in the right direction, and inculcate genuinely progressive thinking among the young generation. Interestingly, Dr Devy quipped, “We should not want any ‘terrible beauty’ in India,” referring to the infamous Easter 1916 Irish freedom uprising against English tyranny in which millions of young people lost their lives in a civil war of sorts, and inspired William Butler Yeats to write his famous poem Easter, 1916: beginning “I have met them at close of day…” and concluding “A terrible beauty is born.”

Endorsing his sentiments was Goa Dakshinayan Abhiyan convenor Datta Naik. He said the gathering of almost 1,000 people sprang up almost spontaneously. He added, “It is a collective desire to forge a new solidarity between all progressive forces. It is a struggle for the freedom of creative expression that foregrounds tolerance and dialogue. It is an attempt to deepen rational thinking as being pivotal to society that is genuinely equal, just and respectful of diversity.” The event has logged 300 delegates from Goa and other parts of India. It will begin with a sankalp yatra to Lohia Maidan where a public meeting will be addressed by Hameed Dabholkar, Medha Pansare, Vijay Kalburgi, Prashant Naik, Atamjit Singh, K Satchidanandan, Dhanaji Gurav, Uttam Parmar, K Neela, Manan Kumar Mandal and others.

On November 19, the inaugural session at Ravindra Bhavan will see Dr Ganesh Devy, Leela Samson, Berzwada Wilson speaking, and there will be discussions (Yogendra Yadav on “India at Crossroads” and one with Raosaheb Kasbe), cultural evenings of poetry reading, singing, and much else. There will be a media session on “Media: Freedom & Promiscuity” with familiar communications and media stalwarts – Amol Palekar, Rajdeep Sardessai, Nikhil Wagle and others.

The concluding session will be based on an action plan to fight communalism presided over by Prabhakar Timble with Annad Karandikar, Harsha Badkar and Prashant Bhushan as participants. Entry fee for delegates is `1,000 while students may participate freely on presentation of ID cards.

Needless to say, this multidimensional event promises to be the most exciting ever to sow the seeds of new, more progressive ways of thinking, to eventually bear sweeter fruit in a long-term perspective. Anybody who wants to belong and be counted as a progressive force must make time for it!